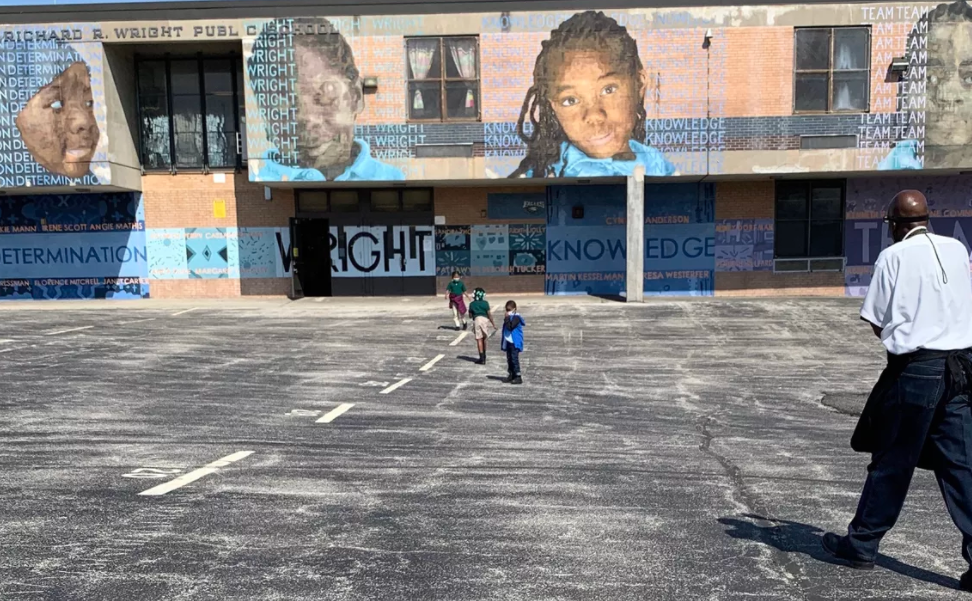 There were 30 adults and just five students.

Wright, which enrolls 306 students in kindergarten through fifth grade, was one of 53 schools to open this week for some in-person learning as part of the School District of Philadelphia’s phased-in reopening for the early grades. Principal Jeannine Payne and the teachers and other staff who returned to their building for the first time in almost a year desperately crave normal school experiences. A hug. A high five. Holding a young student’s hand on the way into the building. But, based on their experiences so far, the road to normal seems impossibly steep.

Laura Nicholas, who teaches Spanish, said she felt more effective teaching from home, where she can teach without a mask and use props. Here she must wear a mask and most of the time has no students in person. Those who do attend sit behind plastic barriers and can’t go near their classmates, if there are any in the room.

“This is like a dystopian version of school,” she said.

For the students who came on Thursday, all in kindergarten, it was their first day ever of in-person school, and the only normal they know.

Two of them were in teacher Ellen Jenkin’s room. They sat behind plexiglass barriers, carefully spaced six feet apart. Andre Baker, 6, knew one piece of normal school he could look forward to: recess. But when Charles Brown, the school’s climate specialist, summoned him and Sydnee Tucker, 6, from class mid-morning, it was to take them for their rapid COVID-19 tests in the nurse’s office. Fifteen minutes later, they returned wearing Groucho Marx masks that Brown discovered as he took the two on a tour of the mostly empty building while awaiting their (negative) results.

Philadelphia, in its fourth attempt at reopening, is bringing back students in prekindergarten to second grade, with a new set of schools announced each week. At Wright, about 130 students in the early grades were eligible for the hybrid model — 56 were expected to return, but 18 have been in class so far.

Most students are split into two cohorts and attend two days a week, either Monday and Tuesday or Thursday and Friday. Special education students with complex needs, such as autism and physical disabilities, can attend all four days.

Wright has a high percentage of special education students, about 34%, because it volunteered to be a center for high-needs students in North Philadelphia. That’s one reason the school has so many adults on staff.

The district automatically enrolled 19 eligible students with complex needs in hybrid learning, but so far only four have attended.

Payne did say that 15 additional all-virtual families have contacted her to get on the list for hybrid learning when the district again offers the opportunity.

In Jenkin’s kindergarten, five students were expected, but just Andre and Sydnee came to school. On Thursday morning, the teacher worked hard to help them while 15 virtual students stared back from her laptop’s screen and a large smartboard, which dominates the front of the classroom.

“I love to see the kids,” said Jenkin, a 20-year teaching veteran, as she struggled to master the interaction between her laptop, her document camera, and smartboard, all while teaching the in-person kids. “But this is a little trickier.”

As the morning progressed, she seemed to become more adept at making it all work. After helping Sydnee and Andre fire up their own laptops, Jenkin led all the students in an exercise matching uppercase letters with their lowercase counterparts. Then she had students circle words with similar sounds, like “tax” and “fix.” She enunciated the consonant sounds, “tuh, tuh, fuh, fuh.”

“This is so hard with a mask,” she said.

Still, most of the students completed the exercises correctly, and Jenkin said she believes that they are making progress under the virtual model. But once the students left for lunch and recess, Jenkin said she was frustrated by all the things she didn’t do or couldn’t do.

First, she pointed out that the bookshelves in her room were turned backwards to the wall. “I have a classroom library, but I can’t use the books,” she said. She would usually teach math using manipulatives, but she can’t do that either.

Before the pandemic, the district began investing millions in revamping kindergarten classrooms with brightly colored tables, reading and writing nooks full of books, LEGO stations, Play-Doh, distinctive cubbies, bins with blocks and math manipulatives. While Wright has not yet had the makeover, the teachers adopted most of the educational philosophy behind it: that much of the learning in kindergarten should be through play and social interaction.

This iteration of kindergarten is not that.

“I use virtual manipulatives, but it’s obviously better for the children to touch them and move them,” Jenkin said. “And I would be doing a lot more writing with them, physically holding a pencil and writing on paper.”

Other teachers in the building spent most of Thursday with no in-person students at all.

Nicholas, who teaches Spanish, and Maya Culbertson, who teaches art, are specialty teachers, which means they take over a class during the regular teachers’ preparation periods.

They typically do so virtually from empty classrooms, and they wonder if putting themselves at risk of catching COVID-19 is worth it.

“I only feel safe because there are so few students,” Nicholas said. “I don’t understand the push to get back before we are all fully vaccinated.”

City officials say they are on track to have all willing school staff fully vaccinated in April. Nicholas said she has received her first vaccine shot.

Both she and Culbertson said they doubt that parents understand their students’ actual experience under the hybrid model. One of the touted benefits is socialization, but there is very little of that going on, they said. At one point, Culbertson had a single student in the classroom. “I’m doing a Zoom lesson for one kid sitting at his desk with shields,” she said. “It was lonely.”

What’s happening in Philadelphia, seems to Nicholas “a step forward in getting back to buildings, but not progress.”

Payne did not argue much with Nicholas’ description of the experience as “dystopian.”

“We work so hard to make school a welcoming and nurturing place, where we shake students’ hands and hug them and put a hand on their shoulder when they need it.” But this, however, “is very much the opposite of everything you work toward a school being.”

The public needs to see teachers back in buildings with their students to combat the painful narrative that somehow they are not doing their jobs when they are working harder than ever, Payne said. They need to see the glimmer of normalcy. All she and her teachers can do now is try to make it work.

But, she added, “People don’t understand that what you’re fighting to get back to is not what you had.”