Please ensure Javascript is enabled for purposes of website accessibility A job or a civic duty? Colorado weighs paying school board members - THE CHICAGO HERALD Press "Enter" to skip to content

Home » A job or a civic duty? Colorado weighs paying school board members 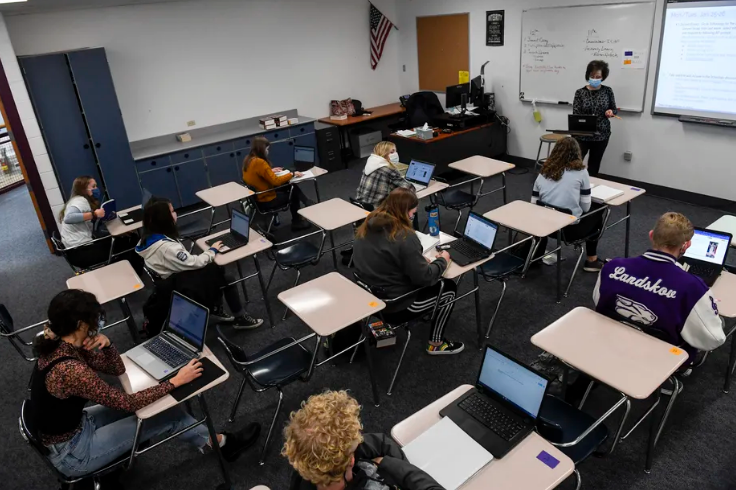 A job or a civic duty? Colorado weighs paying school board members

More than 60% of students in the Roaring Fork School District are Hispanic, but when Jasmin Ramirez was elected in 2019, she and fellow board member Natalie Torres became the first Latinas to serve on the school board.

Like all Colorado school board seats, it’s a volunteer position that comes with no pay. That sacrifice became even more challenging when Ramirez’s husband lost his income during the pandemic. At the same time, she felt like she brought valuable perspective on the issues facing Latino students — from parents facing COVID risks at work to lack of internet at home — that other school board members lacked.

“It is so important to have diversity on these boards,” she told lawmakers at a recent committee hearing. “Nobody understands that lived experience. It becomes a burden to those of us who want to create change in our communities to do this for free.”

A proposal working its way through the Colorado General Assembly would allow school board members to be compensated for their service for the first time. The bill, sponsored by state Rep. Steven Woodrow of Denver and state Sen. Brittany Pettersen of Lakewood, both Democrats, doesn’t set the rate of compensation. Instead, school boards could vote on a compensation rate that would go into effect after the next school board election.

Supporters of the proposal — including the Colorado Education Association, the state teachers union — say it will make school board service more accessible to people from diverse backgrounds, including working-class people of color who are more representative of Colorado students.

Serving on a school board can require many hours of work outside of meetings and force members to scale back their paying jobs. School district employees who run for and win school board seats have to quit their jobs.

Opponents say Colorado’s underfunded schools shouldn’t be spending even modest amounts to pay school board members. They also said most school board members don’t receive enough public scrutiny to be sure voters would hold them accountable for pay decisions.

“There are very clear instances of people who may be self-interested or self-dealing and vote for a pay raise assuming they will be reelected,” said state Rep. Colin Larson, a Littleton Republican. “Wouldn’t it be better to send that decision to the voters?”

Republicans proposed an amendment that would allow school board members to be paid only if local voters agreed, but that idea was rejected.

The bill passed the House on a party line vote and gets it next hearing in the Senate Education Committee on April 22.

According to information compiled by the National Association of School Boards and the Education Commission of the States, Colorado is among the third of states that don’t pay school board members, other than reimbursing travel expenses. A quarter of states pay school board members based on meeting attendance — $50 a day in Louisiana, for example — and another quarter leave the decision up to local school boards.

The debate touches on larger philosophical questions about whether holding elected office should be an act of civic volunteerism or a job, and which model better serves the public interest. Nonetheless, Colorado school boards stand in contrast to many other elected bodies. County commissioners, state legislators, and city council members all draw salaries, though council pay can vary from nominal amounts to more than $94,000 a year in Denver. Members of the State Board of Education don’t receive a salary.

Pay might help with that, but pay alone is unlikely to result in major changes to who runs for school board, political scientists said. That’s because the barriers for candidates from working-class backgrounds start much earlier. They’re less likely to be recruited by people with connections, and they’re less likely to have the networks to raise money or the job flexibility to spend hours calling donors or attending community meetings.

“To increase diversity, you have to address the pipeline, the fundraising aspects, the recruitment of candidates,” said Sarah Reckhow, an associate professor of political science at Michigan State University. “You have to put in enormous time and energy, and you might or might not win, and you have to raise all this money. You have that upfront investment in running for office, and that’s a big barrier for diverse candidates.”

That doesn’t mean paying school board members is a bad idea, they said.

Nick Carnes, a political science professor at the Sanford School of Public Policy at Duke University, studied the effect of higher salary on the economic backgrounds of the people who ended up serving in state legislatures. He found that states that paid legislators more had the same or fewer politicians from working class backgrounds, the opposite of the effect reformers hope for.

He compared the dynamic to increasing the prize money for a marathon. A larger purse attracts more elite runners with more training rather than more new runners.

But Carnes cautioned that his research doesn’t answer the question with certainty. School board dynamics might be different than state legislatures or vary by community. And other research has found that paying elected officials contributes to better performance, including spending more time on their elected position.

“When we think about school board composition, that’s as important as it gets for small-D democratic government.”

This article was originally posted on A job or a civic duty? Colorado weighs paying school board members