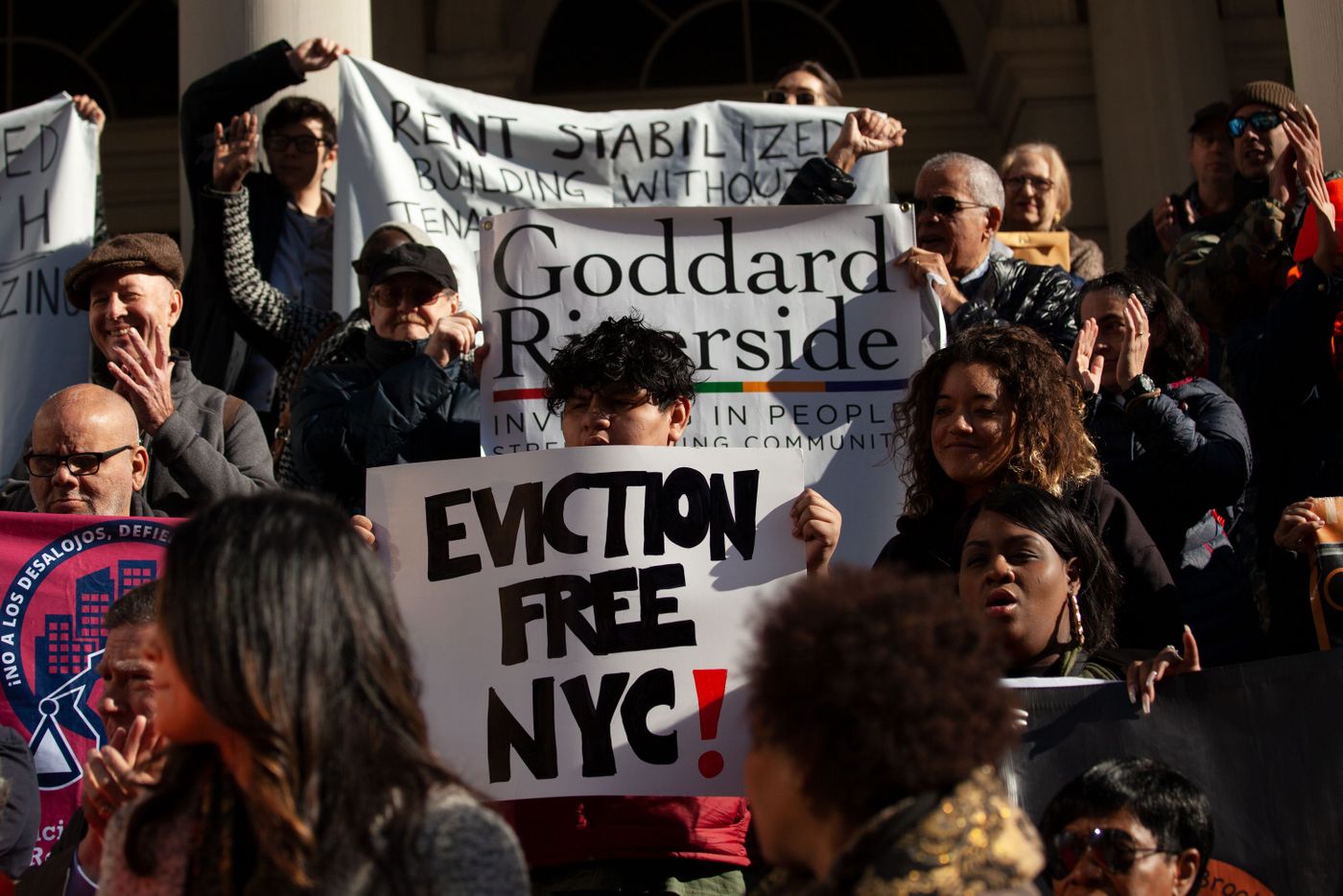 If a family of three in New York City makes $46,060 or less a year, they can get a publicly funded attorney to help in housing court, thanks to the relatively new “Right to Counsel” law.

But if that same family brings home anything over that modest amount — which is technically 200% above the federal poverty line but still a struggle in New York — they are not guaranteed free representation and could be forced to navigate matters like an eviction proceeding with no legal help.

Tenants’ rights proponents want to see that changed by way of “universal right to counsel” bills pending in Albany, and point to new court data collected during the pandemic that shows just how much demand there is from households above the current income cutoff.

“These tenants are in a place where they’re still affected by eviction pressures because rents in New York City are really, really high,” said Oksana Mironova, housing policy analyst for the Community Service Society and the author of a recent study of city Office of Civil Justice data on who uses Right to Counsel services.

The office, part of the city’s social service agency, runs the free-lawyer program.

Her analysis found that more than 10% of tenants served by the program between July 2020 and June 2021 fell above the income restriction.

In New York, even 300% of the poverty line — $69,090 combined annual income for a family of three — doesn’t necessarily mean you have the cash to fight a legal case.

“If you’re in this space where you’re above 200% of the federal poverty line, but you’re not super wealthy, you’re not going to have enough money to hire lawyers,” Mironova said.

The data offers a fleeting glimpse at the overall demand for counsel, because during the COVID crisis the courts nixed the income restrictions and allowed anyone to access free attorneys, regardless of household earnings.

But that rule change is not necessarily permanent, and it’s up to individual legal service organizations — like the Legal Aid Society, Take Root Justice or Bronx Defenders — to decide if they can take on those clients above the income cutoff.

And those groups are particularly swamped right now, they’ve said. Adriene Holder, the attorney-in-charge for Legal Aid’s civil practice, said Right to Counsel cases have doubled in The Bronx since this time last year.

Holder said changing the rules to open legal service to all was “the right thing to do” during the COVID-19 crisis. But now, with the backlog of cases in the courts, the eviction moratorium ended and an industry-wide shortage of attorneys, legal groups are “beginning to experience this crunch around capacity.”

She added, “This is kind of a recipe for a lot of concerns about our ability to be able to properly represent all of these tenants.”

Already, some tenants have been forced to move forward with eviction cases without lawyers to help them, Gothamist reported on Wednesday.

Looking for a Slow Down

In the short term, the Right to Counsel Coalition — which includes Legal Aid and many other legal groups — has pushed for the court system administrators to pause new cases, or slow down how many cases are put on the court calendar, in order to deal with a backlog of cases from pre-pandemic, 2020 and 2021.

Susanna Blankley, coordinator for the RTC Coalition, said a directive on the issue from New York Chief Administrative Judge Lawrence Marks is necessary.

“If you just leave it up to any individual judge, then it’s not consistent across the city and you’re going to get a lot of different kinds of outcomes,” she said.

But the state Office of Court Administration has denied that request for a slowdown, as reported by Law360 last week, and said attorney groups should direct their concerns to the Office of Civil Justice, or OCJ.

Lucian Chalfen, a spokesperson for the Office of Court Administration, doubled down on that rejection a statement to THE CITY Wednesday, saying the legal providers “have to get their house in order” and not “try and project their capacity issues on the court, which is working tirelessly to move through cases and reduce the pending matters.”

Nevertheless, despite the existing staffing challenges with providing legal representation in Housing Court, advocates say universal right to counsel is the way to go for the long term.

Holder is dealing first-hand with staffing shortages and manages many lawyers with fast-growing case counts. But she’s still backing the state legislation.

“What Right to Counsel has shown is that when people actually have an attorney from the very beginning of a case, it actually is better for everybody,” said Holder. “It’s better for the court system. It’s better for the tenant. And oftentimes, it’s better for the landlord, believe it or not, to have someone who understands what’s going to be necessary to move the case towards some kind of completion.”

Neha Sharma, a spokesperson for DSS and OCJ, said the agency “continues to work closely with our network of legal services provider-partners and the Office of Court Administration as we evaluate and work to address any issues that might impact the cases of any New Yorkers who are entitled to free legal counsel.”

As THE CITY has reported previously, Right to Counsel has helped more than 65,500 New Yorkers who faced eviction stay in their homes. Last fiscal year, 71% of tenants in Housing Court had legal representation. That’s up from an estimated 10% before the law, which was first passed by the City Council in 2017 for high-need areas and then expanded city wide by former Mayor Bill de Blasio in 2020.

The bills in the state legislature would not only get rid of any income limits for legal clients but also expand the program to all of New York State, not just New York City.

Gov. Kathy Hochul is behind the idea of enlarging Right to Counsel in theory but has outlined a different path forward. In her State of the State legislative priorities unveiled in January, she suggested a new program that would expand Right to Counsel upstate, but keep the income cutoff at 200% of the poverty line.

Hazel Crampton-Hays, a spokesperson for Hochul, said the governor “is committed to expanding access to legal assistance for those facing eviction, and we will continue working with the legislature on this issue.”

Blankley of the RTC Coalition noted the bills have 32 sponsors in the Assembly, 23 in the Senate and “a lot of momentum.”

In the five boroughs, Manhattan Borough President Mark Levine and new Upper Manhattan Councilmember Shaun Abreu have called for at least boosting the income limit to 400% of the poverty line for access to legal counsel.

That local bill, introduced in last year’s session, must be reintroduced to be considered and has not yet been taken up by this year’s members.