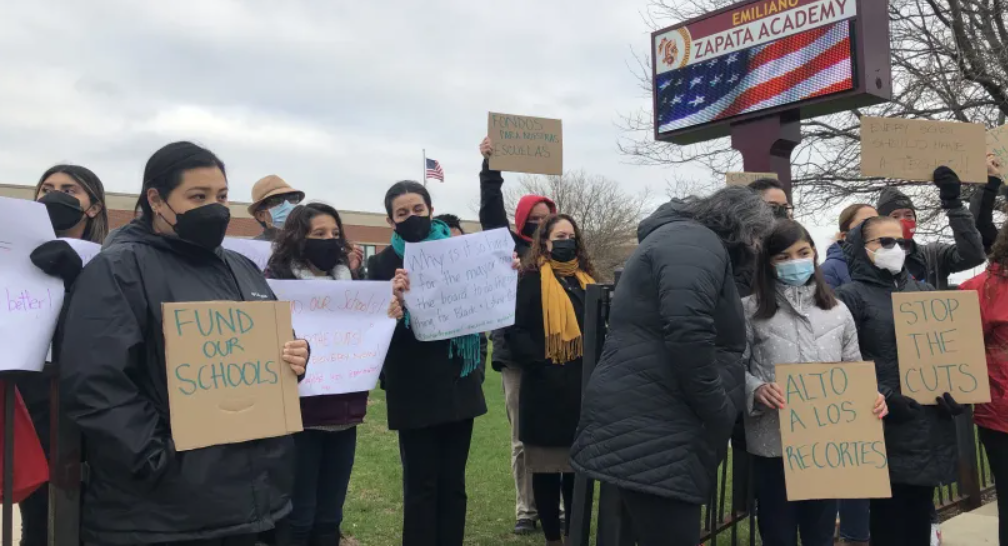 Chicago Public Schools leaders vowed to step up efforts to explain next fall’s school budgets amid intensifying pushback — and sharp questioning from a school board member — about cuts on some campuses with declining enrollment.

After a string of protests — including two events Wednesday ahead of the regular school board meeting — district CEO Pedro Martinez said the backlash has in some ways misrepresented a shift in how the district budgets for schools.

After two years of largely holding schools harmless amid steep enrollment losses magnified by the pandemic, the district proposed cutting budgets at 40% of schools, while the remainder could see comparable or increased funding. Critics, including the teachers union, the principals association, some elected officials, and parent groups, have argued the district should use its federal COVID relief dollars to ward off the cuts as schools are still trying to bounce back from the pandemic’s disruption.

At Wednesday’s meeting, board member Elizabeth Todd-Breland argued the district should have communicated and engaged school communities more about the budgets. Local School Councils, for instance, had to vote on the budgets last week without a clear understanding of how centralized dollars for professional development, after-school programs, and more will affect their schools, she said.

“Folks don’t know what’s going on — and sometimes that’s me,” she said. “There has to be greater visibility and transparency and true overcommunication.”

Martinez said that since releasing the school budgets last month, the district has added some additional dollars for academic coaches and other staff and partially reversed some cuts after principals made a case that they went too far. He said the outcry over the cuts has not accounted for additional resources the district budgeted in centralized funds campuses will tap.

The schools chief also argued that the protests fail to give his team credit for ensuring that all schools have art instruction and enough staffing to avoid combining students of different grades in one classroom.

And he stressed that, with the district adding about 1,600 teaching positions, it’s unlikely any educators will lose their jobs next fall.

The Chicago Teachers Union and a coalition of parent advocacy nonprofits held protests before Wednesday’s board meeting to call on the district to reverse the cuts. During the meeting, union president Jesse Sharkey acknowledged the school budgeting issue is complex and said he understands that the district will likely rehire special education and other teachers facing layoffs at other schools with stable or growing enrollments. But he said he worries that other districts might snap up some of those educators before they are assigned new positions.

“School communities will be thrown into turmoil and there will be lots of turnover,” Sharkey said.

Martinez said he will work to make the process of switching schools smoother. With the positions the district is hiring, he said, “There’s no reason anyone will lose their jobs.”

He also pushed back against the suggestion that the district was sitting on unspent federal COVID relief dollars, including $1.8 billion from the American Rescue Plan alone. Officials said last month the district has spent 7% of this money, though a plan for making use of the dollars before the fall 2024 deadline is forthcoming.

“Every single ESSER dollar is being spent or is being committed,” Martinez said, referring to the acronym for Elementary and Secondary School Emergency Relief, the catch-all name for that federal funding.

Todd-Breland said board members have heard from school leaders and Local School Council members concerned about the fallout from the cuts. She commended Martinez for his engagement with principals, but said the district did not do enough to explain the budget and seek input from other employees and families. And, she noted, the board has not yet gotten a full accounting of how the district has spent its federal pandemic relief money — an update officials promised is coming later this spring.

Martinez said he will keep getting the word out.

“We want to make sure everybody has the facts and the complete information,” Martinez said, adding, “When the dust settles, this budget will be much more equitable.”