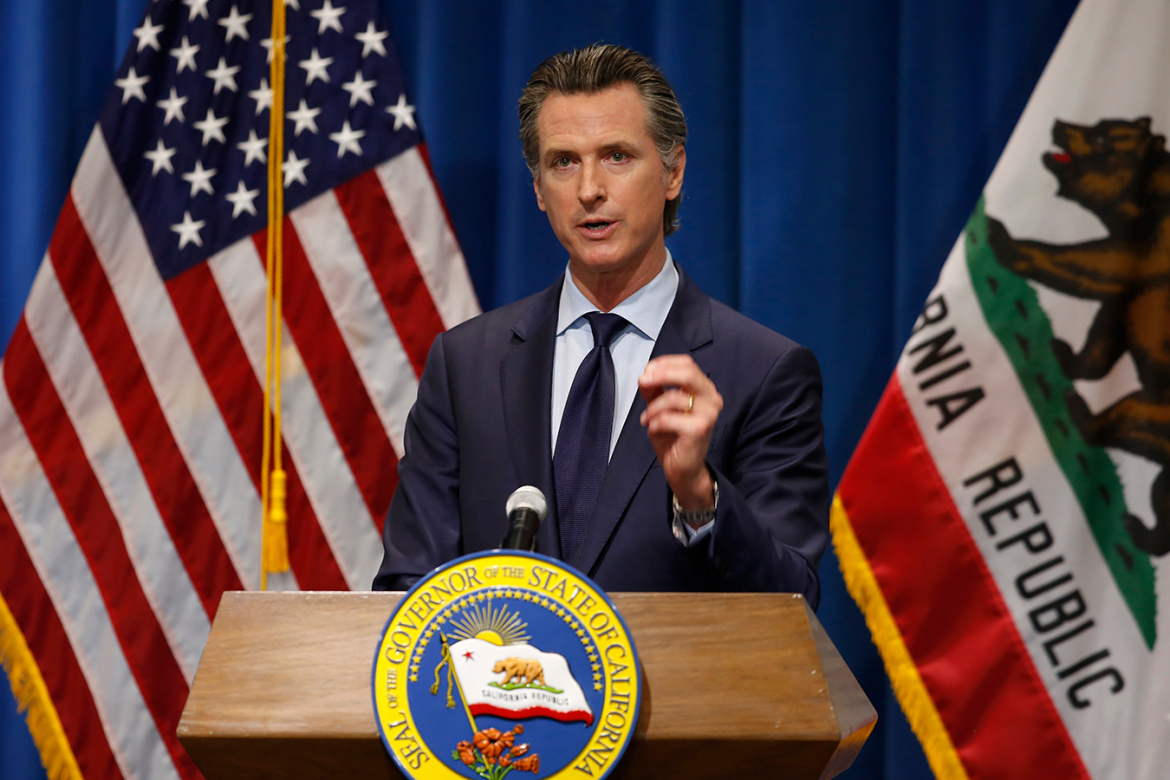 SACRAMENTO — The coronavirus has claimed another victim: California’s finances.

“The state of California, as large as we are,” Newsom said, “simply cannot do everything that is needed in this moment.”

The Democratic governor also warned that California can no longer afford the expansive health care agenda he outlined in January because the pandemic has shredded the state’s finances. Unemployment is projected to reach at least 24.5%, Newsom said, and state finance officials are projecting a $54 billion budget deficit for the coming fiscal year. The number of enrollees in California’s Medicaid program, Medi-Cal, is expected to soar, putting greater pressure on the state general fund and forcing cuts to education and safety-net programs.

Newsom’s revised proposal marks a remarkable shift from four months ago, when the legislature’s Democratic majority was debating how to increase the size and scope of government programs, and the state was flush with $16.2 billion in rainy day reserves.

At that time, Newsom sought to expand Medi-Cal to unauthorized immigrants ages 65 and up and dramatically increase mental health and addiction treatment — especially for homeless people.

“We have been making historic investments in the last many years in the state of California,” Newsom said. “And now being forced back into this position to make cuts breaks my heart.”

Other states are facing similarly extreme budget shortfalls. Revenue projections for the 2021 fiscal year are down $13.3 billion in New York and $4.6 billion in Illinois, according to the National Conference of State Legislatures.

Lawmakers likely won’t have the money, said Trish Riley, executive director of the National Academy for State Health Policy. Like California, many other states are likely to face spending cuts “even more brutal” than what they faced in the Great Recession.

“Do we invest in prevention when the house is burning down?” Riley asked. “That will be the fight legislators have all over the country, and I think the real issue here is these are tough decisions.”

Newsom is proposing a modest increase in public health funding for California. His budget includes a one-time $5.9 million investment for the state Department of Public Health, and $4.8 million in annual ongoing funds for public health infrastructure expansions.

Together, the Health Officers Association of California, the Service Employees International Union California and the County Health Executives Association of California are asking the governor and legislature to allocate $150 million every year from the state general fund for a major public health workforce expansion, including disease investigators, public health nurses and epidemiologists. That’s three times the amount they requested last year.

Chronic underfunding of public health, they say, has hamstrung the state’s ability to respond now and into the future.

“If not now, when?” said Michelle Gibbons, executive director of the County Health Executives Association of California. “We know we’re entering into a recession, but we also know that this COVID-19 pandemic has demonstrated what happens when public health is not adequately funded. So if we don’t invest in our public health infrastructure, we’re setting ourselves up for failure again.”

Newsom’s budget addresses the projected deficit by cutting programs, increasing health care-related taxes and drawing from the state’s rainy day fund. The state legislature must send the governor a balanced state budget by June 15, so Newsom and lawmakers are headed into a month of tense negotiations.

Some lawmakers said they will push for more public health funding, including state Sen. Richard Pan (D-Sacramento), chair of the Senate Health Committee.

“We need to be sure we build up our public health workforce to address these issues over time,” Pan said. “The sooner we can have the pieces in place, particularly with testing and infrastructure to test, trace and isolate, the sooner we can restore public confidence in terms of people wanting to go out and shop.”

But not all lawmakers are convinced the state can afford new investments in public health. Assembly member Phil Ting (D-San Francisco), chair of the Assembly Budget Committee, said the state should pursue federal reimbursement to fund pandemic-related public health proposals, but beyond that, the money isn’t there.

The state could raise health care funds through a Newsom administration proposal to tax e-cigarettes, which could generate up to $33 million in the first year, said state Finance Director Keely Bosler.

Meanwhile, with millions of Californians losing their jobs, and their job-based health insurance, Medi-Cal enrollment is expected to peak in July, when 14.5 million Californians — or about 2 million more than today — are expected to rely on the program, according to the governor’s budget.

But given the deficit, the state can no longer afford to expand Medi-Cal to older undocumented immigrants, Newsom said. A major Medi-Cal transformation aimed at expanding behavioral health and homelessness services is also no longer feasible, he said.

“Unfortunately, we just don’t have the resources,” Newsom said.

To help balance the budget, Newsom is proposing major cuts to Medi-Cal, including eliminating some optional benefits restored this year after they were cut during the previous recession. They include adult podiatry care, eyeglasses, speech therapy and hearing exams.

Newsom called on President Donald Trump to step in and help prevent the cuts, saying the president should back a new federal coronavirus relief bill in Congress.

“These are cuts that can be triggered and eliminated with the stroke of a pen,” Newsom said.

Health care advocates vow to fight the cuts. Lawmakers must commit to expanding and preserving health care for those who need it most, said Anthony Wright, executive director of Health Access California, a health advocacy group.

“This budget will be a body blow to the health care system we all rely on, at a time when we need health care in a pandemic,” he said.

The article was published at Another Coronavirus Casualty: California’s Budget.