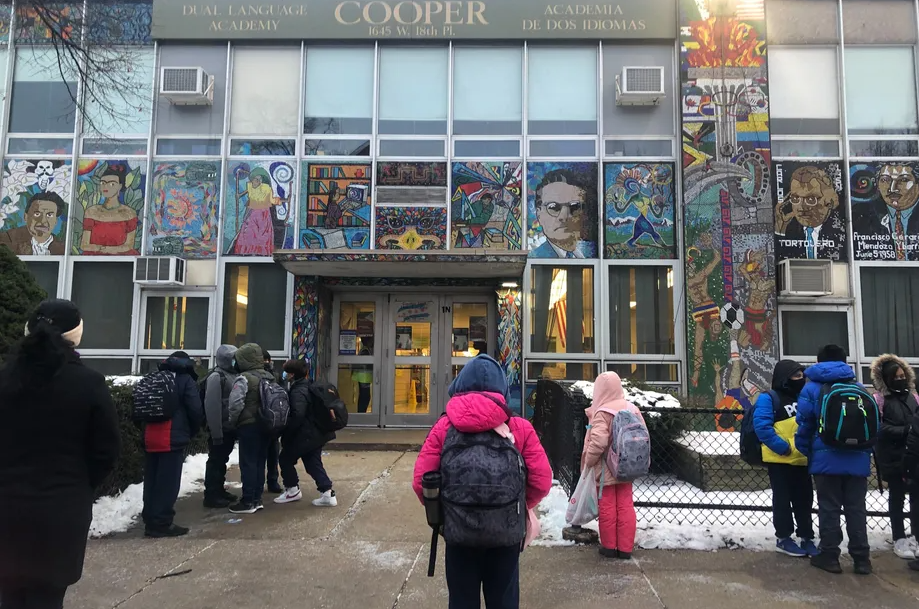 The mother had conflicting feelings about the reopening. On the one hand, she was “excited” because she felt in-person learning was better than remote learning. On the other hand, the latest surge in cases brought on from omicron was “worrisome.”

“Even if my entire family is vaccinated, I still worry because vaccinated people are still getting the virus,” de Paz said. “It’s worrisome — but we have to learn to live with it, while continuing to take precautions seriously.”

Chicago schools reopened Wednesday after an acrimonious standoff between the city and its teachers union over COVID safety concerns on campuses. The standoff drew national attention after it abruptly shuttered schools to the vast majority of the district’s 330,000 students — and because it dragged into the spotlight the sizable challenges faced by schools amid an unpredictable virus, from staffing shortages to quarantine confusion to delays in contact tracing and testing.

Caught in the middle were parents such as de Paz, who is trying to balance the safety of her sons with making sure they are getting the best education possible during a tumultuous time.

She’s talked to her sons about proper mask-wearing, handwashing, and keeping physical distance when possible.

While she loved spending time with her sons last week after they were stranded at home due to abrupt school closures, de Paz said her sons felt a bit frustrated and stuck at home.

“They felt like a bird in a cage,” she said.

In reflecting on the teachers union’s decision to walk out of school buildings and insist on remote learning and on the city’s reaction to cancel classes entirely, de Paz urged city and state officials to take the concerns of teachers seriously and give “priority to public schools.”

“This is the future for everyone, not just a few parents,” de Paz  said. “Work with the teachers. Give these teachers and students priority. Give them the things they need to stay protected.”

She said she finds it  difficult to believe the city doesn’t have money for the basics like masks.

“This is a global pandemic that is impacting everyone,” she said. “Masks shouldn’t be a luxury. This is important. This is necessary for them to be in class everyday.”

Reyna Garcia, whose fifth grade son also attends Cooper Dual Language Academy, was happy for classes to resume in-person. She didn’t want to see a return to remote learning because it “didn’t work for him last year.”

She understood concerns about coronavirus but felt it was time to “learn to live” with the new reality by getting vaccinated and taking extra precautions, she said.

The previous week of canceled classes wasn’t a challenge for her because she’s currently working remotely, but said if she were working in her office she wouldn’t have been able to manage.

“My sister, who has four kids at Cooper, was struggling a lot,” Garcia said. “She was looking for babysitters. It was difficult for her.”

Garcia said she wished the district and the teachers union had worked it out or talked directly to parents before making a decision that impacts so many children and parents.

The fate of the tentative agreement that sent students back to classes Wednesday is now in the hands of the union.

The union’s leadership body — the 700-person House of Delegates — has voted to end the standoff, but it’s not yet a done deal. The rank-and-file membership has until Wednesday afternoon to give final approval to the tentative safety agreement reached by the city and union.

A simple majority will decide the outcome. The vote is expected to pass.

The agreement establishes school-level metrics that will determine when campuses are flipped remotely, boosts contact tracing by paying teachers extra to fortify the district’s efforts, and sets a goal of securing 100% of parents to opt-in to COVID surveillance testing by Feb. 1 through phone banking and joint CPS-CTU efforts.

The district also agreed under pressure from teachers to distribute KN95 masks to all staff and students and bring back a daily safety screener, though it is up to campuses to make the final decision about whether to restart the electronic screener and have families fill it out daily.

The agreement does not deliver everything the union wanted and some teachers were undecided going into the vote.

On Wednesday, a day after Mayor Lori Lightfoot said that she had contracted COVID-19 and would be in quarantine for five days, Cooper students, bundled in winter coats and talking with one another, waited in frigid temperature along a chain-link fence until the front doors opened shortly before 7:45 a.m. Some parents hugged and kissed their children as they wished them a good first day back.

Jenny Reyes, who dropped off her daughter shortly before 7:30 a.m., felt “pretty confident” about the return to in-person learning. Like other parents, she said remote just didn’t work for her children who are distracted by YouTube or other online websites.

The mother said the canceled week of classes was fine because even though educators were locked out of digital classrooms, her child’s teacher still managed to contact parents to provide homework during the days off. “She was sending texts and calling” to send assignments.

In talking with her daughter’s teacher, Reyes sympathized with educators who she felt were fighting for greater protections at schools.

“All they got were masks, but lost four days of pay,” she said. “I feel sad for them.”

The mayor has said it is up to CEO Pedro Martinez whether teachers will receive back pay for the canceled classes. The district could add four instructional days back to the calendar and effectively close the pay gap that way, but that has yet to be determined.

Reyes hopes that parents are taking this latest variant seriously. “I hope they are responsible and don’t send their kids to school if they’re sick or have symptoms,” she added.

But not all parents were happy for the return, Maria Gonzalez was not feeling good about sending her daughter back into the classroom.

The district’s safety measures, she said, were inadequate at schools. She was frustrated with contact tracing efforts that failed to notify parents about positive cases in her child’s class, she said.

“They didn’t even inform me if there was a case,” Gonzalez said. “My daughter could have had it and I didn’t know. That’s one thing I’m very upset about. There’s no communication and I’m totally against” the reopening.”

The fight between the district and the teachers union left her frustrated. She believed both sides had valid points, but the fight was ultimately “unfair” and hurt kids.

“The ones that were punished were the kids,” Gonzalez said. “Not the teachers. Not the mayor. Nobody else, it was just the kids.”