Please ensure Javascript is enabled for purposes of website accessibility At least six people experiencing homelessness died during the winter storm. That number could rise. - THE CHICAGO HERALD Press "Enter" to skip to content

Home » At least six people experiencing homelessness died during the winter storm. That number could rise. 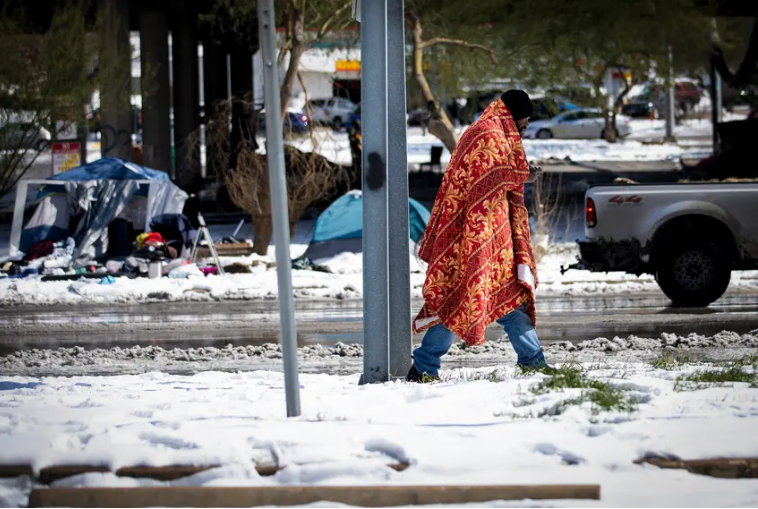 At least six people experiencing homelessness died during the winter storm. That number could rise.

As temperatures reached 20 degrees Feb. 15, Harris County sheriff deputies found a 60-year-old man dead in a van under an overpass east of Houston. According to the agency, members of their homeless outreach team had previously tried to convince him to seek shelter, but the man declined. Advocates for people experiencing homelessness suspect he froze to death.

“The overwhelming emotion I’m hearing is one of rage,” Samuels said during a Monday conference call with the National Low Income Housing Coalition. “Rage that this was allowed to happen when this state was given ample time and warning to do something about our power infrastructure.”

Also on Feb. 15, a second person was found dead near Houston’s Midtown neighborhood, Houston Police chief Art Acevedo tweeted. According to Samuels, four other deaths of people experiencing homelessness have been reported: two in Fort Worth, one in Austin and one in Abilene.

Marc Eichenbaum, Houston’s special assistant to the mayor for homeless initiatives, said that unsheltered people can sometimes be reluctant to seek shelter, in the same way that people resist mandatory evacuations.

“We had a lot of individuals experiencing unsheltered homelessness that initially believed that they could deal with this, not having experienced weather like this in three decades,” Eichenbaum said. “So we had many more people coming [to the convention center] in the second or third night.”

Before and during the storm, advocates drove through Texas’ largest cities trying to find people living on the streets and bring them to the available warming centers and emergency shelters. The official numbers of casualties are still unknown.

“I’m sure we’ll hear of others. Galveston had a lot of deaths that they’re still looking into,” Samuels said.

Dallas and San Antonio haven’t reported any deaths so far. Pastor Wayne Walker, CEO of the homeless outreach organization Our Calling, was leading Dallas’ shelter at the Kay Bailey Hutchison Convention Center, and his team of volunteers was driving around the city trying to bring people in. Initially, it wasn’t easy.

“Only one of every 20 people chose to come with them. The other 19 decided to tough it [out],” Walker said.

The number of people seeking help increased as the subfreezing temperatures continued, but many people still declined help.

“Nobody wants to go to a building that is that busy and that crowded,” Walker said. “And for many people that are homeless, they’ve been isolated for so long, that the last thing that they want is a place that is crowded.”

The storm also affected several buildings dedicated to serving people experiencing homelessness across the state. Samuels reported at least three shelters with busted pipes. Two of them, which help victims of domestic violence, suffered “catastrophic damage.” In San Antonio, the Haven for Hope facilities had a water main break and had to serve hundreds of people with limited water.

“In addition to the loss of life, there was millions of dollars lost and damage to facilities and infrastructure across the state,” Samuels said. “And we’re going to be paying for this for quite some time and repairing that for quite some time.”

Samuels also said that the results could have been more dire if it wasn’t for the work of volunteers and organizations also trying to survive the weather and power outages.

“Throughout this storm, we did have people that just stayed outside, stayed in tents,” Samuels said. “But our outreach workers went out every day, oftentimes twice a day, for [wellness] checks and to bring resources to help them stay warm and safe.”

This article was originally posted on At least six people experiencing homelessness died during the winter storm. That number could rise.