Please ensure Javascript is enabled for purposes of website accessibility Back to school in April: Newark students return to the classroom - THE CHICAGO HERALD Press "Enter" to skip to content

Home » Back to school in April: Newark students return to the classroom 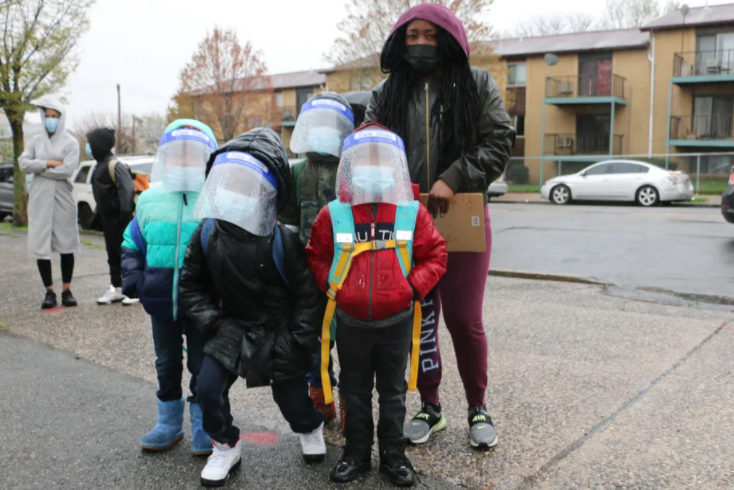 Back to school in April: Newark students return to the classroom

Under a silvery sky, the Newark school system flickered back to life Monday morning.

Crossing guards ushered children across the street. Yellow buses rumbled past. And students lined up outside their schools, equal parts eager and anxious as they waited to enter classrooms for the first time in 13 months.

“Welcome everybody!” said Charity Haygood, principal of Avon Avenue School, to the children and parents lined up in the cold rain. “It’s a little moist out here, but it’s warm inside!”

Until Monday, the Newark school district, which is New Jersey’s largest, had operated remotely since the coronavirus pandemic forced schools nationwide to close in March 2020. Since then, the district has tried multiple times to reopen its school buildings, but was stymied by the city’s high infection rate and teachers union opposition. Meanwhile, concerns have mounted about students’ academic progress and social-emotional well-being after a year of online learning.

By early April, Newark was one of just over 100 school systems in New Jersey whose buildings remained closed — the state’s nearly 700 other districts and charter schools were already bringing students back into classrooms at least part-time. Newarks’ schools will be working on a hybrid model, with students at most schools in the classroom two days a week and remote the other three. (Some high schools will offer four days a week of in-person learning.) Most of the city’s charter schools also plan to shift to a hybrid model this month.

About 40% of families in the Newark Public Schools system registered their children to return to school buildings this week.

Sajataflori Poole signed up her sons, who are in prekindergarten and kindergarten at Avon Avenue School. The evening before classrooms reopened, she readied their outfits and backpacks and wrote on construction paper, “My first first day of school.” On Monday morning, she waited outside the school with her preschooler, Semaj, who wore a PAW Patrol facemask.

“This is their first year, so all they know is their peers and their teachers on the computer screen,” Poole said about her sons. “It’s going to be a different connection when they’re face to face.”

While families lined up outside the school, staffers handed them forms to sign certifying that their children had not displayed any COVID-19 symptoms. A security guard reminded the children to stand on red hearts that had been spray-painted six feet apart along the sidewalk.

Yejide Benson said she was sending her second-grade son back to Avon because he struggled to concentrate online and longed to leave their house. Still, she felt mixed feelings on Monday.

“I actually wanted him to go, but also I’m worried about the situation with COVID,” she said. “But since the principal and the school authority have shown us that they are going to give [students] the maximum protection, I think it’s O.K.”

Newark has gone to great lengths to reassure families that it’s safe for their children to return.

The district purchased air purifiers for every classroom, ramped up cleaning protocols, set up an employee vaccination site, and adopted weekly COVID-19 testing for students and staffers. Individual schools developed intricate safety plans — some fill nearly 50 pages — and produced explanatory videos. In Abington Avenue School’s video, Principal Alejandro Echevarria demonstrates how to safely enter the school alongside someone dressed as a bespectacled owl, the school’s mascot.

Under the district’s new in-person protocols, most students stay in the same classroom the entire day — no going to the gym, cafeteria, or auditorium. Younger students eat lunch in their rooms, while older students are given grab-and-go meals as they leave school at 1:30 p.m., which is earlier than pre-pandemic dismissal.

A couple of miles away from Avon Avenue School, students scurried out of East Side High School after classes ended Monday. Wearing clear plastic backpacks the school distributed to streamline morning security checks, the teenagers debriefed about their first day back.

Sophomore Noryn Junqueira said it was nice just to get out of the house.

“I mainly didn’t like staying at home because it was stuffy,” Junqueira said. “It was just depressing because you’re not around people.”

For ninth-graders, Monday was the first time they took classes inside their high school. Freshman Christopher David said it was a little nerve-wracking, but also productive.

“In person I can concentrate way more than I can with online,” he said. “My full mindset was just on the work.”

Another ninth-grader, Ciara Espinal, remarked how strange it was to see some of her classmates’ faces for the first time.

“When you’re virtual,” she said, “you don’t really know who’s in your class because they turn their cameras off.”

Her friend and fellow ninth-grader, Sonia Bolus, said all the social distancing and desktop sneeze guards felt a little awkward. Even still, just sitting in a classroom again was enough to focus her mind.

“I don’t know why,” she said, “but today is the first time I actually did work in a long time.”

This article was originally posted on Back to school in April: Newark students return to the classroom