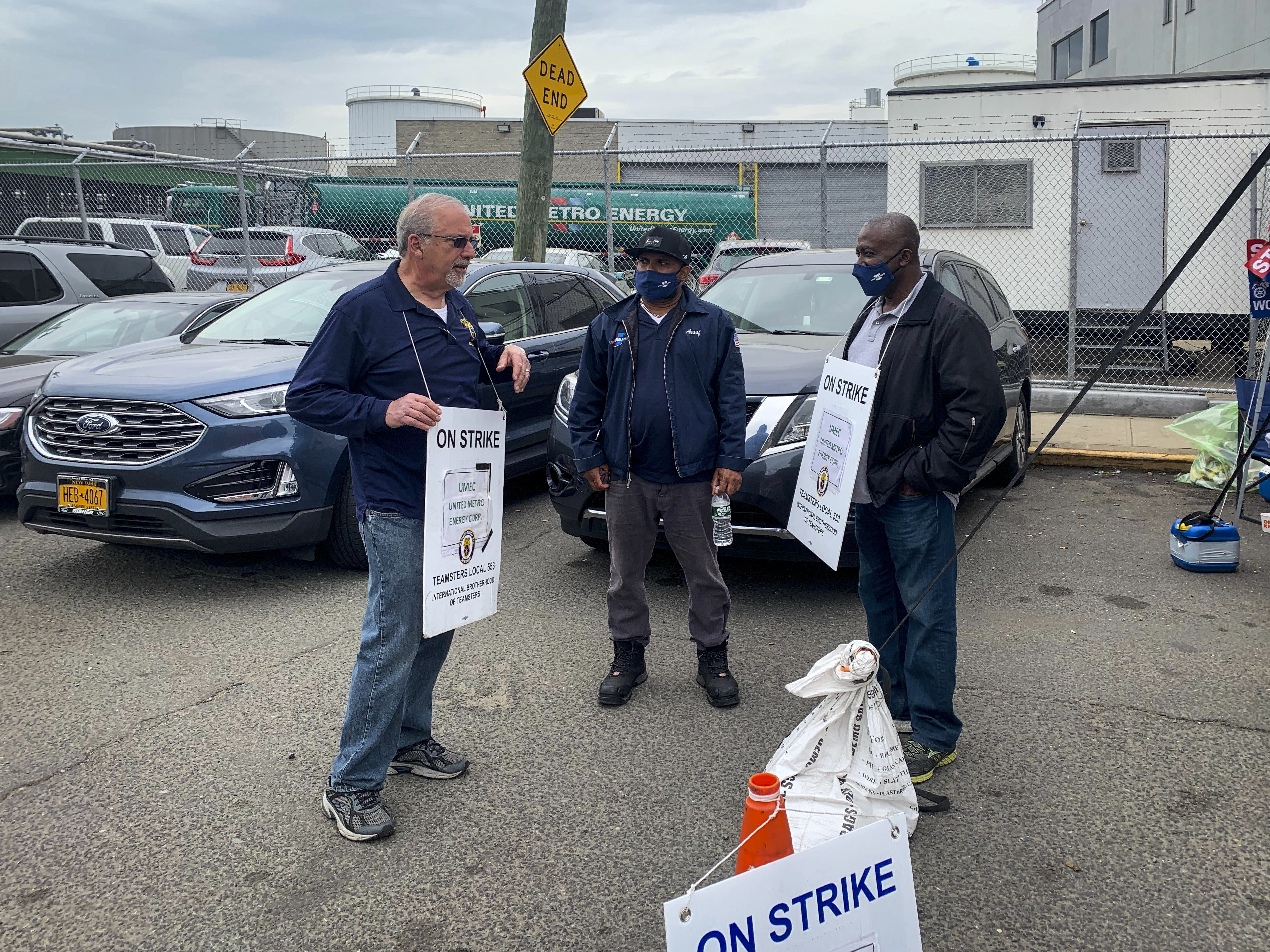 Terminal operators, fleet mechanics and service technicians formed a picket line outside the fuel facility in Greenpoint on April 19, after more than two years of negotiations between United Metro Energy and Teamsters Local 553 failed to produce a contract agreement.

The strikers, who note Catsimatidis has declared his intention to enlist some “replacement” workers, have manned the picket line around the clock ever since.

Before and throughout the pandemic, the employees helped to distribute United Metro Energy’s heating oil to New York City schools, hospitals, the MTA and gas stations, said Alex Moore, a spokesperson for the Teamsters Joint Council 16.

“We were the ones that kept this thing running while everybody stayed home — and we can’t get rewarded for that?” said John Thompson, one of the workers on strike.

Moore said the standard wage for fuel terminal operators in the area is $36.96 an hour, but United’s workers on average make about 20% less than that wage, with some pulling in less than half.

Thompson, who has fixed and installed boilers for the company for seven years, earns $16.63 per hour. He said Catsimatidis, a self-made billionaire and son of working-class Greek immigrants, should know better than to underpay employees.

“He worked his way up to this,” Thompson said. “So while people are working their way up to this, don’t shortchange them because you know what it was like.”

So far, three employees have received letters from United, “a notice of permanent replacements,” informing them that they’ll be entitled to the old jobs should their replacements leave the company a year after the strike’s last day.

In a statement, Catsimatidis noted that both workers and the company have rights.

“As much as the Union has the right to strike, we have a right, under federal labor law, to permanently replace employees to enable us to service our customers,” Catsimatidis said in a statement, adding that no employee has been fired.

The CEO of Red Apple Group, a conglomerate of energy, real estate, supermarket and media companies, he said that the strike authorization left him puzzled.

“This is the first time in 51 years I’ve ever had a strike,” Catsimatidis told THE CITY in an interview. “And I was a little bit perplexed because we were dealing in good faith.”

Union rep Vic Castellano told THE CITY that the United workers voted to unionize in 2019, and soon afterward the Teamsters met the company at a bargaining table. But after more than two years of negotiations, “there has been no progress, whatsoever,” he said.

“Basically, they’ve just been dragging out negotiations,” Castellano said. “And we wouldn’t take this action if they were negotiating the way they claim to be.”

“Nothing should take over two years,” he added.

The workers are asking for raises in line with the standard wage provided to employees of other oil companies in the city, as well as a pension and health care benefits, Castellano said.

Andre Soleyn, a terminal operator who ignited the push to unionize three years ago, said he was the first employee to receive the company’s “permanent replacements” letter.

He said the first thing that crossed his mind was his wife and three daughters, two of whom are in college.

“It was a little bit upsetting that as soon as I come out here to try to make something better for them, that’s the first reaction,” said Soleyn, who’s worked for United for five years. “But I wasn’t surprised, actually, because there really isn’t any due process here.”

Soleyn said he’s seen longtime employees fired on a whim. Management does whatever it can to prevent workers from earning overtime pay, even if it means ordering workers to go home moments after they arrived at work, he said.

The union rep said teamsters asked the company why Soleyn was picked. According to Castellano, a company representative replied: “It was just the luck of the draw.”

“They really don’t treat the workers with any respect,” Castellano said.

In his statement, Catsimatidis said he’s happy to negotiate.

“In fact, we have already offered the union certain common sense solutions during our prior negotiation sessions, including participation in the union’s welfare plan and additional retirement benefits for our employees,” he said.

He said United’s customers depend on the company, which “must continue servicing them.”

Catsimatidis said he hoped he could strike a deal with the Teamsters, as he has with other unions.

The next negotiation session is set for May 5.