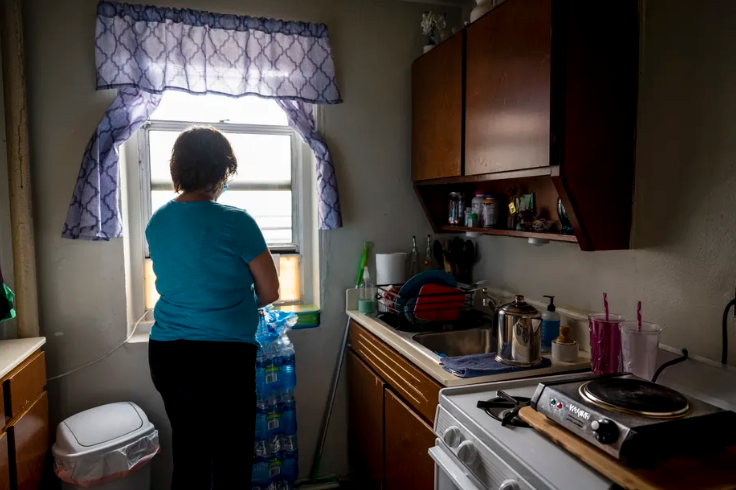 Dozens of families in Brooklyn’s largest public housing complex have been without cooking gas since January — infuriating tenants still dealing with construction to repair damages caused by Superstorm Sandy.

The gas outage at the Red Hook Houses has forced households in 96 apartments, spanning three buildings, to cook on electric hot plates provided by the New York City Housing Authority.

Some apartments have many as eight or nine people, and residents say it’s next to impossible to whip up decent meals for families on the one portable burner.

“It’s aggravating,” said Rhonda Clarke, 59, one of more than 180 tenants without gas. “I want to go back to my shopping again, having my food in my house and preparing my meals.”

The current gas outage is part of a pattern at the Red Hook Houses, with months-long disruptions occurring in four of the last five years prior to 2021.

Meanwhile an ongoing, $550 million resiliency project to fix the Superstorm Sandy damage to the Red Hook Houses isn’t projected to be completed until 2023, according to NYCHA.

The lawsuit also cites other poor living conditions in the apartments — including mold, peeling paint, broken electrical outlets and rodent and roach infestations.

“The fact that people are living in complete disrepair and lacking essential services, I think we have to come to a place where we just don’t accept this as the status quo, that we really do expect more from NYCHA,” said Kristie Ortiz-Lam of the Brooklyn Legal Services Corporation A, who is the lead attorney for the tenants.

In a statement to THE CITY, a NYCHA spokesperson said the gas was turned off on Jan. 13 as a safety precaution after a leak was discovered in the three buildings’ shared meter room.

Gomes said NYCHA is working to restore gas service by the third week of April.

“The deteriorating infrastructure at Red Hook Houses and other developments are symptomatic of decades of disinvestment, but the authority is working toward establishing funding sources to address the entire authority and transform NYCHA,” said Gomes.

‘God Forbid You Want a Snack’

“It puts me in a messed up position because I haven’t cooked anything in my crib in like three or four months,” said tenant Michael Santiago, 35. “Guess what? The front store got all my money, Uber Eats and all this extra stuff that I wasn’t even really that comfortable with using, but now I’m forced to use it because I can’t even go to the supermarket and make food.”

“It’d take like two hours to cook one meal,” Clarke said. “Three meals a day should be like six hours if you’re doing breakfast, lunch and dinner — and then God forbid if you want a little snack in between.”

The outage has even prompted some elderly residents to relocate, Clarke added.

“You got to have the gas,” she said. “You know, and if you’re homebound, you can’t go to the store. You cannot go.”

Not the First Time

In 2016, more than 100 tenants at the Red Hook Houses spent the holiday season without gas. In 2018, nearly 500 waited months before NYCHA restored gas in their homes.

Now, many tenants are facing Easter Sunday without gas to cook family dinners.

Santiago said it’s frustrating that even though he’s paying rent, NYCHA is not providing essential services.

“They’re gonna want what they want, so we deserve what we’re owed as well,” he said.

A bill introduced by State Sen. Michael Gianaris (D-Queens) this year would require NYCHA to reduce the rent of tenants experiencing utility service disruptions. The bill is currently pending in committee.

“If you can’t relate, then you don’t feel the urgency,” he said.