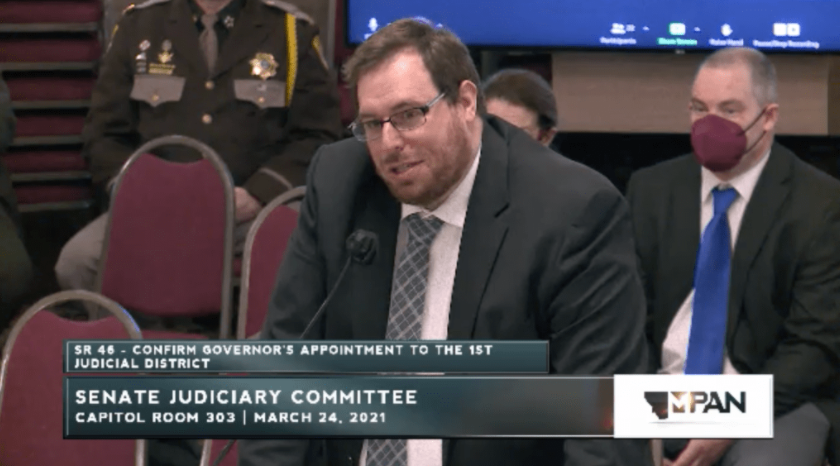 If confirmed, the judges will continue presiding over cases until the end of their terms in 2022, after which they will need to run for re-election if they want to retain the positions. If they’re not confirmed by Senate lawmakers, Gianforte will be able to directly appoint new nominees to fill the vacant positions, per the powers granted the governor under Senate Bill 140, which eliminates the Judicial Nomination Commission, the seven-person body which has previously vetted candidates for vacancies and passed along a shortlist of candidates to the sitting governor. (Senate Bill 140 has since been challenged in court.)

In their remarks before the committee, both judges and their supporters stressed that the decision whether to confirm has implications far beyond the politics of the governor and the executive office. In districts where judges are struggling to keep pace with caseloads and give adequate consideration to a range of criminal, family and civil matters, proponents said, confirming Levine and Abbott would provide certainty and stability to a strained judicial system.

“I ask that you confirm [Judge Levine] to her seat and allow her to continue to manage the overwhelming caseload our judges face,” said Katie Cunningham, a detective with the Great Falls Police Department who investigates crimes committed against children. “Removing her would undoubtedly set our district back even further, putting cases at risk for speedy trial [and] giving us one less judge to call for warrants.”

Lawmakers on the committee asked the nominees a range of pointed political questions to assess their stances on various issues, including gun rights and abortion, many of which Levine and Abbott declined to answer, citing standards of judicial conduct.

Republican lawmakers scrutinized the public record of Levine in particular. Levine served as a Democratic lawmaker representing Missoula from 2007 to 2011 before she graduated from law school at the University of Montana in 2012.

“I was previously in a partisan role,” Levine said of her time in the Legislature. “I recognize now my role is different. My role is to be nonpartisan … people must feel that we will be fair and unbiased and I understand that,” Levine said, promising to recuse herself in cases presenting a conflict of interest or an appearance of impropriety.

Sen. Theresa Manzella, R-Stevensville, and Sen. Keith Regier, R-Kalispell, referencing several groups Levine has previously worked for or been affiliated with as a board member, including Carol’s List and Northern Plains Resource Council, questioned whether she could be trusted as a nonpartisan judge.

“I do appreciate your explanation that now that you’re in a capacity as a judge you have to be more nonpartisan,” Manzella said. “But I would like to ask, if I may, your views on immigration.”

Proponents for both Levine and Abbott, including fellow judges in their respective districts, testified to the nominees’ ability to rule based on law and the parameters outlined by the state and federal constitutions.

Sarah Clerget, a former colleague of Abbott’s at the attorney general’s office, said that while they often had personal disagreements and debates, “I’m standing here as a proponent of him because I firmly believe, and I have watched him over the years that I worked with him, put those beliefs aside and do what was important and what was within the law, what was required by the law,” Clerget said. “And that, again, is something that is very hard, as a human, to do. And I’ve watched him do it.”

Each judge, and those who testified in support of their confirmations, highlighted legal areas in which they are particularly interested, such as land use planning and child protection cases, as well as their strengths based on previous professional experiences.

Prior to applying for the vacancy created by Judge James Reynolds’ retirement, Abbott worked as an attorney within the state Department of Justice under former Attorney General Tim Fox, where he represented state agencies on various matters. Abbott, like Levine, also has experience in private practice, and said he is now committed to working with Lewis and Clark and Broadwater County residents to resolve a range of civil and criminal disputes, as well as working with drug treatment court participants in the First Judicial District.

“That program I think is enormously valuable,” Abbott said, noting that many drug treatment court participants lack trust in law enforcement and authority figures. Since his appointment in November, Abbott said, “the participants now have had time with me and they know that I am for them, and I’m rooting for them, but they’ve also learned that I will hold them accountable.”

Abbott’s proponents echoed the necessity of drug treatment courts, which are often time- and resource-intensive to run.

“It turns out it’s incredibly hard to find judges who are willing to do treatment courts, and we have one here that is,” said Matt Kuntz, executive director of the Montana chapter of the National Alliance on Mental Illness. “Their caseload is slammed … so for [a judge] to go above and beyond and be willing to serve a treatment court, it’s incredibly important. And I just don’t want to lose one that’s willing to do that.”

The committee did not vote whether to confirm either nominee on Wednesday.