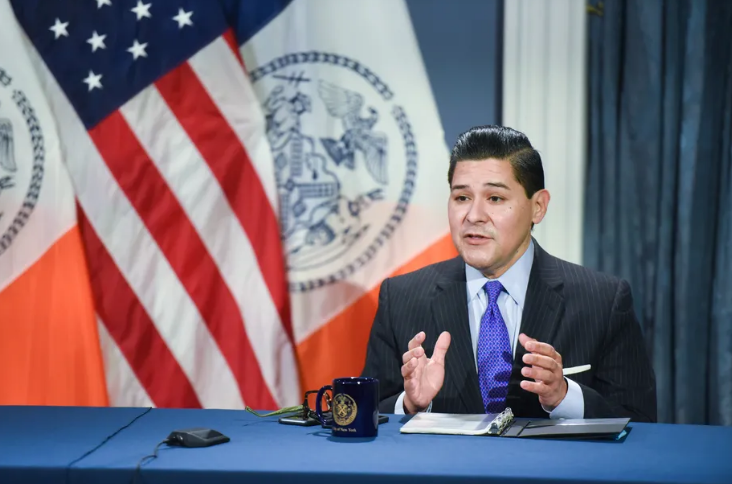 Weeks after his departure as NYC schools chancellor, he takes a private-sector job at IXL

About two weeks after abruptly stepping down as New York City schools chancellor, Richard Carranza has landed a new job as an executive at an education technology company.

Carranza will serve as chief of strategy and global development at IXL, a California-based personalized learning platform that the company says is used by 12 million students nationwide, according to a press release posted Thursday.

“Richard will supply IXL with an abundance of wisdom gained from working at the highest levels of K-12 education and a boundless commitment to ensuring all students have access to world-class learning experiences,” Paul Mishkin, CEO of IXL Learning, said a statement

David Bloomfield, an education law and policy professor at the CUNY Graduate Center, said that if Carranza is starting in the position right away, the timing is “a little surprising,” given that the reason given for the former chancellor’s sudden departure was that he needed time to heal after losing 11 family members and friends to the ongoing coronavirus pandemic.

But the New York Times has reported that Carranza and mayor had butted heads on school integration issues, with a disagreement over admission to gifted programs during the health crisis helping to push Carranza out the door.

“Carranza cited the impact of the pandemic and his loss of family and friends as a reason to step down. This opened a window of opportunity for him to depart the de Blasio administration — no love lost there — and spread his wings in the private sector,” noted Priscilla Wohlstetter, a distinguished professor and research director at Columbia University’s Teachers College. “The grass is always greener on the other side!”

With learning dramatically disrupted for more than a year since the pandemic first bore down on New York City, Carranza hinted before his departure that personalized learning may play a leading role in helping gauge where students have fallen behind, and also to help them catch up.

“The new normal that we’re talking about post-pandemic has really created some opportunities for us to individualize instruction and really tailor instruction for students in a way that we just didn’t have the ability to do,” before the pandemic, Carranza said in one of his last press conferences as chancellor.

Many other school districts have already begun to lay out firm plans for making up lost learning time, leaning on expanded summer school options or tutoring programs. But New York City, the nation’s largest school system, has yet to present many details about the strategies officials will pursue to help its roughly 960,000 students fill in gaps.

Other former chancellors have to stayed in the public or not-for-profit sectors. Rudy Crew, who led the school system in the 1990s, was head of Medgar Evers College until he recently stepped down in the midst of controversy. And Dennis Walcott leads the Queens library system after serving as head of schools under former mayor Michael Bloomberg. One notable exception is Bloomberg’s former chancellor Joel Klein, who was recently appointed to the board of the e-cigarette company Juul.

Bloomfield said that Carranza’s departure to the education technology sector probably speaks to exploding growth in that area.

“His signature vision was diversity and there are plenty of traditional places eager to advance that agenda in academia, foundations, not-for-profits, and government. Hopping to ed tech with nary a word about equity seems off-brand,” he said. “But big, new opportunities beckoned.”

IXL did not respond to a request for comment about when Carranza will officially join the company, which has been around since 1998 and recently purchased the language learning platform Rosetta Stone.