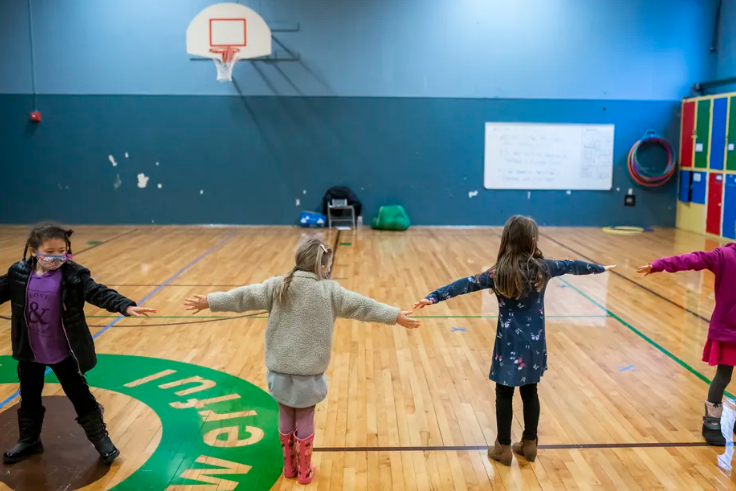 Students can safely stay just three feet apart in classrooms in most cases, the Centers for Disease Control and Prevention said Friday, revamping its physical distancing guidance in a shift that could encourage more schools to open five days a week.

Students should remain six feet apart while eating, the CDC says, and adults should continue to stay six feet from one another and from students.

The agency’s guidance in February recommended six feet of distance in most cases. But many schools do not have the space to keep students that far apart. In the weeks since, the CDC has faced pressure to revamp the guidance from advocates and some experts who argue that any benefit of the six-foot requirement was far outweighed by the downsides of remote instruction for students. Pressure has come from the other side, too, with a prominent teachers union leader warning against revamping the guidance earlier this week.

The CDC says its decision is backed by new research making the case that three feet is sufficient.

“CDC is committed to leading with science and updating our guidance as new evidence emerges,” said Director Rochelle Walensky in a statement. “Safe in-person instruction gives our kids access to critical social and mental health services that prepare them for the future, in addition to the education they need to succeed.”

Where community spread is high, the CDC advises that middle and high schools either enforce six feet of distance or implement a “cohorting” model, in which a group of students remain together throughout the school day.

“This recommendation is because COVID-19 transmission dynamics are different in older students – that is, they are more likely to be exposed to SARS-CoV-2 and spread it than younger children,” the CDC said in a statement.

Schools are not required to follow the CDC’s guidance, and in states including Colorado, three-foot distancing has already been the norm for young students. It’s unclear exactly what share of U.S. schools had been strictly following the six-foot rule, but the latest estimates suggest that about half of American schools are offering in-person instruction five days a week.

Still, the guidance is likely to influence plans in some districts. On Thursday, New York City’s mayor said a relaxation of the distancing rules would prompt the city to allow more students to opt into in-person learning.

It may also prompt some pushback from teachers unions. American Federation of Teachers President Randi Weingarten reacted cautiously to the news Friday, saying the union hopes the CDC is correct, but “will reserve judgement” until it reviews the newest research.

Alongside the new guidance, the CDC released three studies on COVID in schools.

One paper focused on individuals who had come into contact with someone who had tested positive for the virus in a St. Louis County school. When 102 of those close contacts were tested, only two of them had contracted COVID.

Another study in Salt Lake County, Utah found low rates of in-school transmission, despite high rates of community spread. Students there often did not maintain six feet of distance in classrooms.

And a comprehensive study in Florida paints a mixed picture of spread in schools.

Among 6,800 schools in the state, 695 experienced an identifiable school-based outbreak of COVID by December 2020. But less than 1% of students in the state had an identified COVID case that could possibly have been linked to schools. None of those cases resulted in deaths, and many may have been contracted outside the classroom — in social settings or at sporting events.

“School sports and other extracurricular activities in which masking and physical distancing are difficult or impossible to achieve should be postponed, particularly during periods of high community transmission,” the study says.

Meanwhile, nearly 10,000 cases of COVID among school staff members in Florida were identified as potentially linked to schools. Those cases resulted in 219 identified hospitalizations and 13 deaths, though it’s possible some of those people contracted COVID outside of schools.

The study concludes that transmission in schools does happen, but that school is not a uniquely risky environment.

“These findings add to a growing body of evidence suggesting that COVID-19 transmission does not appear to be demonstrably more frequent in schools than in noneducational settings,” the researchers write.