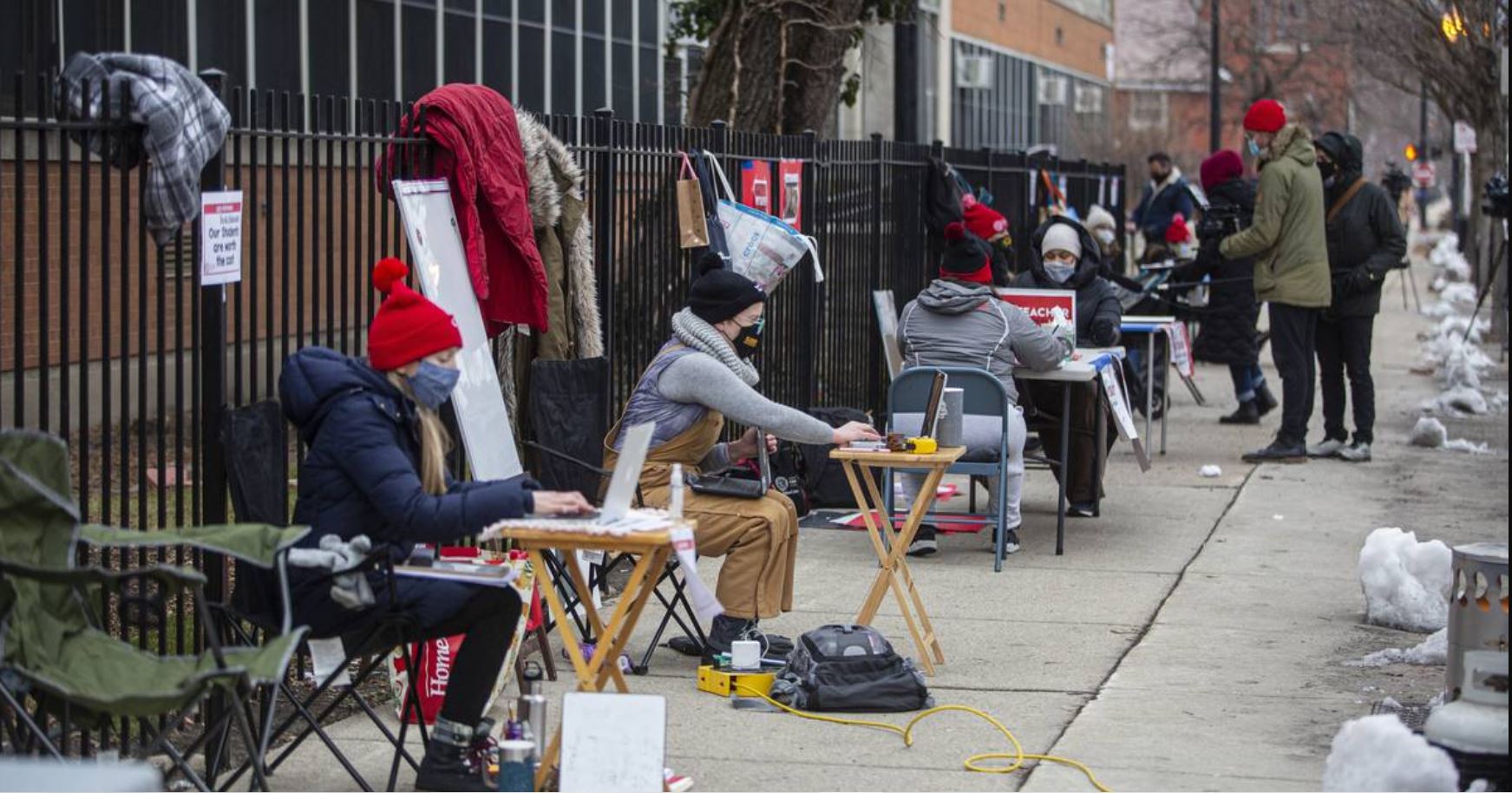 With hopes dashed for a late-night deal, Chicago teachers will defy district orders to report to campuses Wednesday, forcing the school district to suspend in-person learning for 3,200 prekindergarten and special education students.

The move throws Chicago’s efforts to reopen schools to more students into disarray. If the district responds with disciplinary action against teachers, it would trigger a strike in the nation’s third largest school district, canceling school for 340,000 students.

Chicago Public Schools said the district “had no choice” but to ask all students to return to remote learning beginning Wednesday. Officials said that earlier in the day, they proposed a new round of health and safety measures, including doubling testing frequency for school-based staff to twice a month, offering surveillance testing for in-school students, prioritizing vaccinations for in-person teaching staff in neighborhoods with the highest COVID-19 rates, and suspending in-person learning should the positivity rate of school-based tests reach 3%.

But it wasn’t enough to reach a deal. Major gaps remain on vaccination timelines, the amount of surveillance testing of school staff, and which educators should get accommodations for health and family reasons.

For now, officials said they still planned to reopen schools to a broader group of kindergarten through eighth graders next Monday. But with multiple issues unresolved, hope appeared to dim for the 70,000 students who expect to resume in-person learning.

In a statement, the union called for a mediator to help resolve months of gridlocked negotiations.

Mayor Lori Lightfoot said she was disappointed that an agreement with the city’s teachers union remained elusive and warned of profound disruption to the district brewing for the second time in two years. The Chicago Teachers Union staged an 11-day strike in 2019 just months after Lightfoot took office.

She cited “three weeks of daily evidence that our schools are safe.” City leaders acknowledged that there have been about 60 cases of students and employees testing positive for the coronavirus since the district started its phased reopening earlier this month. But they said in the overwhelming majority of cases, the district’s safety protocols had prevented in-school transmission of the virus.

The district’s CEO, Janice Jackson, said she believes her district’s safety plan goes beyond any across the country that she has seen.

“We believe our latest proposal to the union can serve as a foundation to a deal,” she said.

Parents appear divided. Some support the union’s push to delay reopening until teachers are vaccinated or more work accommodations are granted. Others are part of an increasingly vocal contingent who are concerned about the impact on students’ mental health and academics and are pushing for the reopening to proceed as planned. Some are caught in the middle, privately lamenting the instability but publicly staying mum at the risk of getting shamed on social media or causing friction with their children’s teachers or principals.

Still, fewer than a fifth of prekindergarten and special education students who need moderate to intensive support returned to in-person learning this month — a development the union has held up as evidence that families remain unconvinced by the district’s safety measures.

Failure at the bargaining table

There are many unknowns, chief among them how Chicago Public Schools will respond to the union’s labor action. The district has said it considers the move an “illegal strike” because it would cancel in-person learning, but taking the issue to labor court to weigh the legality of a strike can be a long process.

Earlier this month, the district “locked out” some teachers who didn’t report to in-person work, but it waited several days to do so, and the number of teachers denied access to their online classrooms fluctuated over the first weeks of reopening. Of the 3,800 teachers who returned to campuses, the district locked out just under 3%, or about 100 teachers.

Both sides laid out the ongoing sticking points in negotiations Tuesday. Whether educators should receive both vaccine doses before returning remained one of the biggest issues in dispute.

Asked why the city does not simply move teachers to the front of the vaccination line, however, Lightfoot said that would be unfair to frontline workers, including those who work in public transit and the city’s libraries, who have been reporting to work.

The district said it had stepped up its offer earlier in the day. Officials said they expanded accommodations for teachers who requested them for health reasons and were offering schools additional options to address gaps in the number of teachers reporting to in-person work. But they did not provide numbers. Of the 7,000 teachers expected to return in the first reopening wave, about 46% received accommodations.

For the first time, the district also included a plan for rapid tests for students and spelled out specific metrics that would determine when individual schools would revert back to remote learning.

Lightfoot also said she is “all for” mediation. She cautioned that the strife would hurt the district’s reputation in the long run — and would undermine efforts to improve the city.

“We won’t get there, ever, with this happening. I hear you, parents. I see your comments on social media. I understand the frustration. We are doing everything we can to make sure we get this deal done,” she said.

The union, meanwhile, said it would continue pushing for safety metrics that it felt best protected teachers returning to in-person work, including a request for all staff to be vaccinated before returning to classrooms, weekly testing, and more telework accommodations for teachers with high-risk family members.

“We are willing to keep teaching, but CPS has said they will lock us out,” said union president Jesse Sharkey in a statement, noting that a broader group of educators would become eligible for vaccinations at the end of February. “We are willing to keep negotiating, but CPS has refused to back down from insisting that 80% of educators and support staff  … in every elementary school be back in class on Feb. 1 to serve less than 20% of the students.”

Negotiations with the district, union leaders said, were akin to a dysfunctional marriage, with “a spouse agreeing to marriage counseling only if the other party first concedes the spouse has the right to do whatever they want in the relationship.”