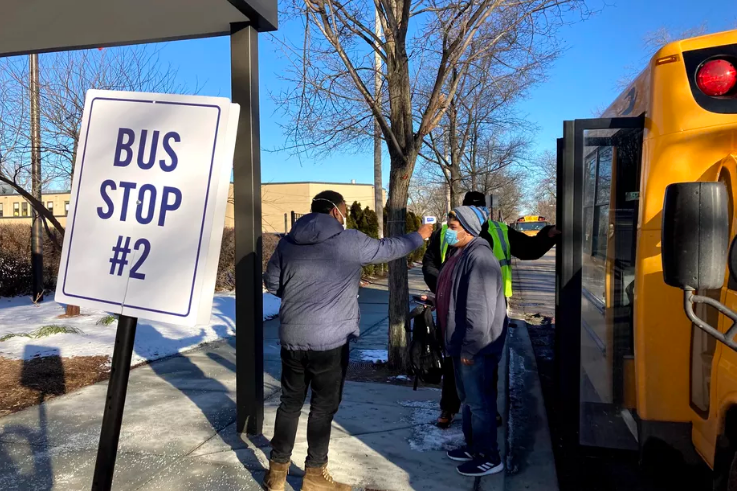 Chicago Teachers Union leaders are weighing a tentative agreement with Chicago Public Schools that could end the reopening impasse in the nation’s third largest school district. The union said it will go to its members Sunday afternoon.

There is still no return date for high school students. Schools chief Janice Jackson said Sunday that talks with the union were ongoing on that point and she hoped to have more information for families “shortly.”

Under a normal contract process, a tentative agreement would go to a full membership vote for approval. The union has called three meetings in the next two days to weigh the tentative contract language: a virtual membership meeting for 2 p.m. Sunday afternoon, a House of Delegates meeting later Sunday, and a second delegates meeting Monday afternoon. On Monday, the union’s representative body will vote on whether to send the agreement language to the full members for a vote, or back for more bargaining.

In the end, a few key concessions appeared to break the stalemate: an aggressive teacher vaccination timeline including doses for teachers returning as soon as this week, a March start date for most elementary students instead of February, a citywide metric that would trigger a districtwide closure, and significant work-from-home concessions for teachers whose students did not choose to return.

The tentative agreement sets a vaccination schedule that would prioritize teachers, despite some health officials’ concerns about ensuring enough supply for other essential workers who have already reported to work. Priority would go to union members who must report to school buildings first, along with members who are already in-person. It would also move union members who are older or in higher-risk categories to the front of the line, as well as employees who live in the 10 zip codes with the highest COVID-19 positivity rates.

It also promises that 2,000 expedited vaccines will be offered the week of Feb. 8 to teachers and in-person staff who work with prekindergarten and special education students returning this week, and union members who live with high-risk family members.

Families will have another opportunity to select in-person learning at the start of the fourth quarter in April. Vaccination timelines and buy-in from teachers could influence how many students choose to return by the end of the year. In December surveys, about 1 in 3 Chicago elementary students said they planned to return to classrooms around the start of the year before reopening was delayed.

The potential deal comes at the end of several weeks of stalemate between the union and district leadership over the push to reopen elementary schools. After the city set a series of deadlines and said the union missed them, the two sides remained at odds over several issues, including vaccinations, return dates, accommodations for staff to work remotely, and improvements to remote learning.

For families, meanwhile, the days of terse back-and-forth brought lingering uncertainty, with the possibility of the city’s second teacher strike in 15 months still looming and the prospect of a return to classrooms unclear.

By Friday afternoon, neither side appeared to even agree whose turn it was to respond to proposals. Some union delegates began taking informal strike polls, and the city threatened to lock teachers out of email and remote platforms should they defy orders to report to work Monday.

She said the potential agreement was critical to helping Chicago recover from the prolonged COVID-19 pandemic.

“These past 11 months have been a whirlwind for our city — but with our school reopening, we have taken a momentous step forward in our journey of renewal and recovery. Schools are a spine for the city.”

Here’s a breakdown of the agreement that union members will weigh in the next 48 hours. Click here to read it in full.

After Chicago entered phase 1B in late January, there was debate over how to prioritize teachers.

Who gets work-from-home accommodations and why was a sticking point throughout negotiations, with district leaders saying they worried they could not sufficiently staff schools if they granted every request.

Chicago resisted setting a districtwide metric that would trigger districtwide closures in case of a COVID-19 surge.