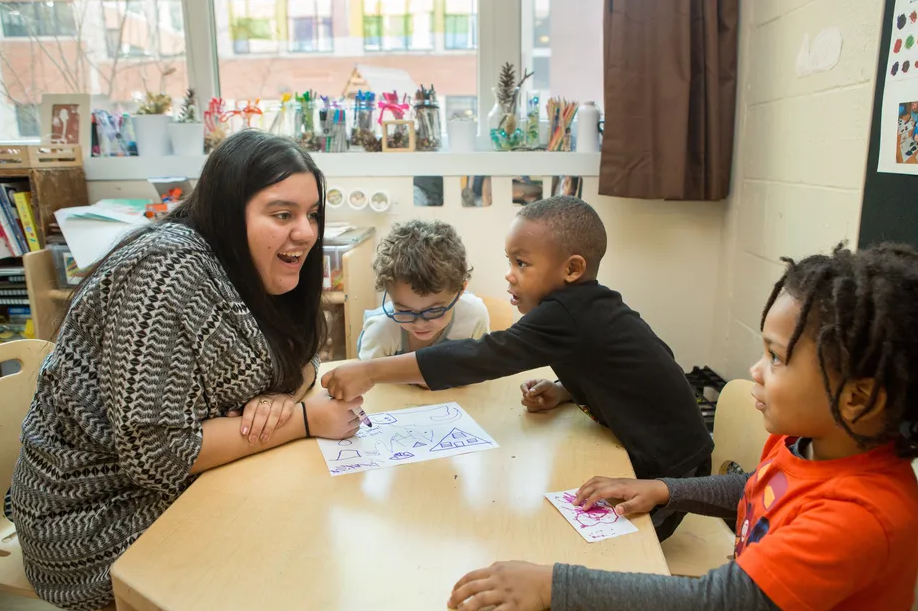 But by late morning, the district’s portal, which displays a wider range of early learning opportunities for families, ran into technical difficulties, bringing applications to a standstill until late afternoon. Parents took to social media to voice frustration as the district said unexpectedly high demand sparked the malfunction and officials worked to resolve the issue with their vendor.

District officials Tuesday morning touted the program’s “continued expansion” — with the addition of 29 classrooms at six schools, but numbers provided later at Chalkbeat’s request show a contraction: The district is also cutting 48 classrooms at 47 schools, for a net loss of 19 classrooms. The district stressed that all of the affected campuses will retain their preschool programs and could reopen shuttered classrooms in the fall if they fill each available seat and have at least 10 students on their waiting lists.

Some early learning advocates said they are seeing a shift in talking to families — with COVID anxiety easing and interest in learning opportunities up — that makes them hopeful the district’s pre-K expansion might regain momentum.

“We are in the third year of the pandemic,” said Gabriela Tenorio, the coordinator of an early learning ambassador program at the parent advocacy group Community Organizing and Family Issues, or COFI. “Parents want their kids back out there, learning.”

In 2020, the district saw a 34% dip in its preschool enrollment for 3- and 4-year-olds, which was even more pronounced among Black families, where the decline was 44%. Enrollment rebounded somewhat last fall, back to 15,430 students, compared with 17,490 on the eve of the COVID outbreak. The numbers are up from pre-pandemic times among white and Asian families, but the district has not recouped those steeper losses of Black and Latino children.

Former Mayor Rahm Emanuel launched the push for free, universal pre-K, and his successor, Lori Lightfoot, has continued to champion the expansion. But even before the pandemic, the city grappled with hurdles, from mismatched supply and demand in some neighborhoods to an application process that confused some families.

“Chicago Public Schools, like other school districts, has been working to mitigate the negative effects of COVID-19 that impacted enrollment at CPS and school districts across the nation,” the district said in a response to questions from Chalkbeat.

The district partnered with the city to place ads on trains and buses, billboards, radio, web, and streaming TV ads. Schools also got outreach dollars, and the district teamed up with community organizations to do outreach door-to-door and help with the application process.

The district said it will continue to monitor supply and demand closely, still tentatively forging ahead with its expansion plans to build up to universal pre-K. This past fall, 2,299 children were waitlisted for early learning programs, including 452 4-years-old.

CPS plans to add another 50 classrooms by the following school year. Preschool programming is available in 64 out of 77 Chicago neighborhoods, according to the district, with the goal of reaching every area of the city by 2023.

All children who are 4 by Sept. 1 are eligible for full- or half-day preschool programs. Three-year-olds are generally eligible for half-day programming. Low-income students, children with disabilities. and those in temporary living situations are given priority.

The district’s new portal, developed in partnership with the Chicago Department of Family Support and Services, will allow families to access more programs, including for pregnant mothers and for younger children through community-based organizations and private providers.

“I hope that our Chicago families take advantage of this expanded opportunity to support their children’s growth and well-being,” said district CEO Pedro Martinez in a statement. “Research has told us again and again that early childhood education provides students with the critical foundation for future success in kindergarten and beyond.”

Martinez and other top district officials touted the new portal in a press event at Wendell Smith Elementary on the South Side just a couple of hours before the site went down.

Talibah Moore, a community organizer with COFI, said she and other advocates are excited about a site that gives parents, including pregnant women, more options and allows them to select more programs. COFI spearheads the long-standing early learning ambassador program to get the word out about such learning opportunities, particularly on the South and West sides.

About 20 parent ambassadors fanned out during the past two weeks to give families a heads-up about the start of the application season, stressing the importance of early learning for children’s brain development. Moore said though the program continued on throughout the pandemic, ambassadors encountered a lot of reluctance to enroll children in district preschools amid rampant COVID fears. But this spring, the mood seems to have shifted.

“Parents are thrilled to apply again,” she said. “This brings hope.”

Parents can apply online at www.chicagoearlylearning.org, via the district’s early learning hotline at (312) 229-1690 or in person at a school or early learning center.