Please ensure Javascript is enabled for purposes of website accessibility Chicago principals are again trying to unionize. Will new momentum help? - THE CHICAGO HERALD Press "Enter" to skip to content 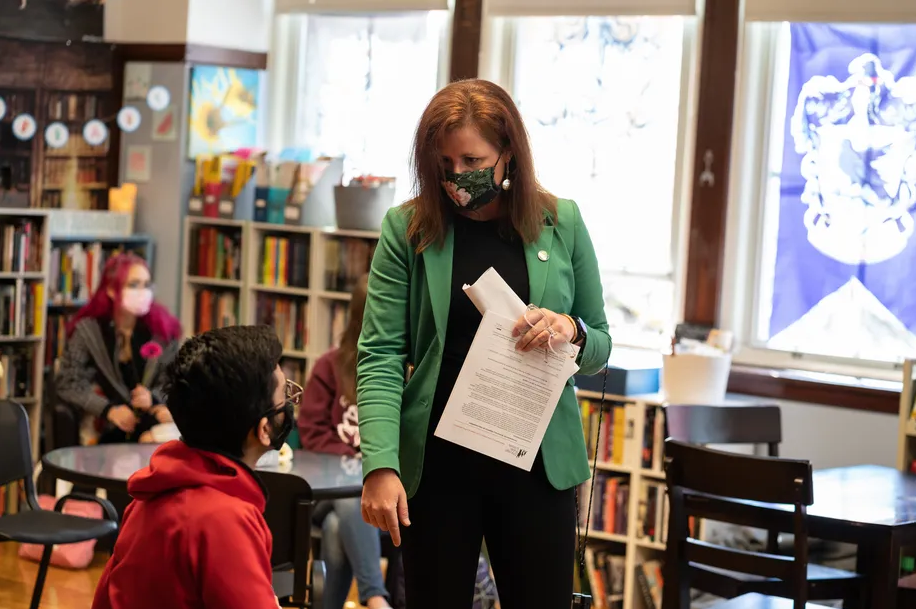 The latest effort to unionize Chicago principals has fresh momentum this legislative session amid a spike in retirements and resignations and complaints about crushing workloads as school leaders steer their campuses through the COVID-19 crisis.

A bill that would give collective bargaining rights to principals passed the House Tuesday night by a 63-35 vote. The bill – HB 5107  – now heads to the Senate where it will be assigned to a committee. If passed in committee, it will go for a floor vote.

In Illinois, principals have been excluded from unionizing because state labor law classified them as managerial employees. HB 5107 would change the definition of the managerial employees to district employees who have a significant role in the negotiation of collective bargaining agreements.

Chicago Public Schools has historically opposed the effort, arguing that principals are classified as managers and not subject to unionization under state law. But the Chicago Principals and Administrators Association has long advocated for the bill, which passed the Senate’s executive committee hearing last year but was not called for a floor vote.

“No one knows as much about running schools as principals,” Troy LaRaviere, president of the Chicago Principals and Administrators Association and a former Chicago school administrator, said Wednesday morning during a virtual press conference, “and yet our experience and opinions are routinely disregarded by CPS district management when it comes to making policy and offering solutions that impact the schools and students under our care.”

The association hopes HB 5107 will give principals time to focus on helping teachers and students, advocate for resources and staff, have a voice on policies and practices in schools, and ensure that the district has a compensation model that will help more teachers become school administrators, LaRaviere said. The bill includes a no-strike clause to make it clear that Chicago principals want collaboration, not conflict, he added.

One source of tension for Chicago’s principals has been the contract between Chicago Public Schools and Aramark.

The district contracted the privatized custodial company to clean school buildings across the district, but parents have complained about dirty classrooms — garbage not being taken out, floors that weren’t mopped, and filthy bathrooms. The Chicago Principals and Administrators Association protested the Aramark contract, but the district has continued to renew the agreement.

Some principals also expressed discontent during a January standoff with the Chicago Teachers Union that reached a crisis point after winter break. They described feeling caught in the middle of the standoff and fielding calls from anxious parents while trying to staff school buildings on short notice in an attempt to reopen buildings without unionized teachers.

“It’s really hard when we have no voice in the discussions,” between the union and district leaders, one principal told Chalkbeat in January, speaking on the condition of anonymity.

If HB 5107 passes and is signed by Gov. J.B. Pritzker, Chicago will join districts such as New York City, San Diego, and Denver where principals have unionized.

In addition to HB 5107, companion bills would create a competitive salary for principals (HB 5405) and enact changes to Chicago’s principal eligibility policy (HB 4933).

In a recent statement to Chalkbeat, Chicago Public Schools said it values the work of principals and assistant principals, but does not agree that they should be classified as non-managerial employees in state law.

Chalkbeat Chicago recently reported that 72 principals and assistant principals have left the district since July, more than the number that retired or resigned during the 2018-2019 school year.

At the Wednesday press conference, Macquline King, principal at Courtenay Elementary Language Arts Center on the city’s North side, described how her responsibilities have increased during the pandemic. Not only is King responsible for cleaning her school, finding substitute teachers, and hiring and recruiting new teachers, she has also had to implement COVID-19 mitigation measures such as organizing vaccine clinics, identifying close contacts, and alerting families of positive cases.

Principals’ responsibilities vary across the city based on the school’s needs and resources, and their days can shift abruptly depending on who’s available to do certain tasks, King said.

King hopes unionizing will create a collaborative environment between the district and principals so she has more time to focus on educators and students.

“Time is of the essence, time is my currency,” she said. “I need my time protected to ensure that future generations are able to be successful in the 21st century.”

This article was originally posted on Chicago principals are again trying to unionize. Will new momentum help?