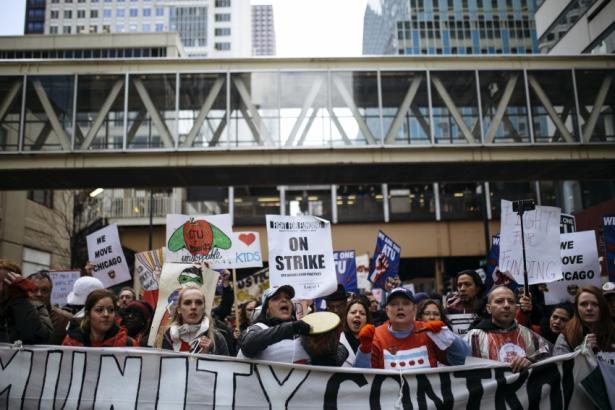 Chicago teachers will vote on a Monday walkout, setting stage for possible strike

The Chicago Teachers Union is giving members three days to decide whether to refuse to report to campuses on Monday, a move that would put the nation’s third largest school district one step closer to a strike.

The vote, if it passes, could set in motion a potential strike if teachers don’t report to buildings and the district responds with disciplinary action. The union has said its goal is a written agreement with the district over working conditions.

Monday is when thousands more educators are expected to report to schools under the next phase of the city’s school reopening plan, with kindergarten through eighth grade students set to follow Feb. 1.

On Wednesday, the union’s 700-member House of Delegates passed a resolution that puts the matter to a broader vote: If enough teachers vote yes, remote teaching would continue, but school-based staff would wage what is essentially a strike by refusing to teach in person until an agreement is reached. The resolution passed with 84% of delegates in favor and 16% against.

Members have until midnight Saturday to vote.

The resolution escalates tensions over Chicago’s school reopening and potentially complicates a district plan to bring 70,000 more students back for in-person learning starting Feb. 1. Among the growing concerns is whether Chicago will have enough in-person staff to reopen classrooms.

It’s unclear what margin the union would need to legally move ahead with an action. A formal strike requires a 75% vote in favor — but the pandemic and the option of remote teaching in lieu of a full work stoppage calls into question whether that threshold applies in this case.

The language of the resolution passed Wednesday says: “Do you authorize the CTU to conduct remote work only, starting on January 25, 2021, or on whatever date the Board requires K-8 members to appear in person? In addition, in the event that CPS retaliates against or locks out members as a result, do you authorize a strike?”

In a statement shared Wednesday night, Chicago Public Schools said they had bargained in good faith with the union over more than 60 sessions, and accused the union of pushing to shut down in-person instruction altogether.

“Stripping tens of thousands of students of the opportunity for safe, in-person learning is not an option or a viable solution for families who have been planning to return since December,” the statement said.

The union’s action, if it moves forward, would deepen the district’s staffing crunch. In the first weeks of reopening, 54% of teachers reported to work at campuses, with the rest working remotely. Nearly a third of the returning teachers requested accommodations for medical or child care reasons; not all received them.

But the numbers of in-person staff fluctuate daily: Some accommodation requests are still in flux, some educators have failed health screeners, and others have simply decided to not report to campuses and continue to work remotely.

The district has said it wants to hire 2,000 retired teachers and support staff to help fill in gaps, but has not yet filled all those positions.

The union’s vote comes as Chicago reopens campuses after 10 months of closures. Two previous reopening attempts, in September and again in November, were scrapped amid rising COVID-19 rates, union organizing, and questions about what the school district needed to do to mitigate risk.

Parent surveys from December showed about 1 in 3 students planned to return when campuses reopened for pre-kindergarten and special education students this month and for K-8 students in February. The district has not yet released student attendance from the first week, but reports from some schools showed that fewer students appeared in person than were anticipated.

So far, how teachers and families experience reopening depends on their individual situations, resources at their schools, and their overall experience of the pandemic.

Some families who sent their children back have been relieved, reporting a renewed energy and excitement in their children after months of remote learning. Teachers have said they can finally get to know students in person whom they had only met through a screen.

But more broadly, labor tension in the district has intensified as educators, supported by some city aldermen and state representatives, have raised concerns about the safety of in-person schooling.

Some staff members, who were called back in the first wave, have refused to return to in-person work, staging protests and working outside in freezing temperatures in front of school buildings. Last week, the school district began to discipline teachers who did not come back by locking them out of their online teaching platforms and blocking pay.

But district leaders remain resolute, with Jackson — backed by Mayor Lori Lightfoot — arguing that some 77,000 families have chosen in-person learning and the district must start reopening school buildings to address inequities deepened by the pandemic.

In response to a question a day earlier about the possibility of a strike, schools chief Janice Jackson struck a cautious note of confidence that an agreement could be reached.

“I have every reason to believe we’ll be ready for Feb. 1 provided everything falls into place with our teachers,” said Jackson, who said the district was “incredibly interested” in coming to a written labor agreement with the union.

How rank-and-file staff members respond to the strike vote will be closely watched, as each new day brings a new round of messaging from the district and union leaders, alongside shifting reports about vaccination timelines and new COVID-19 strains.

This week and last, union delegates held impromptu meetings at some schools encouraging teachers to take action. In a Monday evening virtual town hall, union leaders urged members to vote in favor of a unified action. “The vote has to be yes, otherwise we’re voting to walk back into unsafe buildings,” union president Jesse Sharkey said.

Historically, the Chicago Teachers Union, led for the past decade by an active leadership team that has called for broader social supports alongside its bread-and-butter demands, has been able to get widespread support for its actions.

A state law says that 75% of members must vote in favor of a strike before the union can walk out, a percentage the union exceeded most recently in the 2019 vote that launched an 11-day strike.

The strike vote also isn’t the only factor that could play into a shift in labor relations.

The union and school district have been meeting multiple times a week to negotiate since the summer, so far to no avail. A state bill awaiting Gov. J.B. Pritzker’s signature potentially could give the union more leverage in the reopening debate.

The city’s vaccination timeline could also change the conversation. Chicago health officials have said that teachers should expect to start receiving vaccinations sometime in February, but they haven’t offered more details.

This article was originally published on Chicago teachers will vote on a Monday walkout, setting stage for possible strike