Please ensure Javascript is enabled for purposes of website accessibility Citing the pandemic and enrollment uncertainty, Aurora board blocked staff cuts - THE CHICAGO HERALD Press "Enter" to skip to content 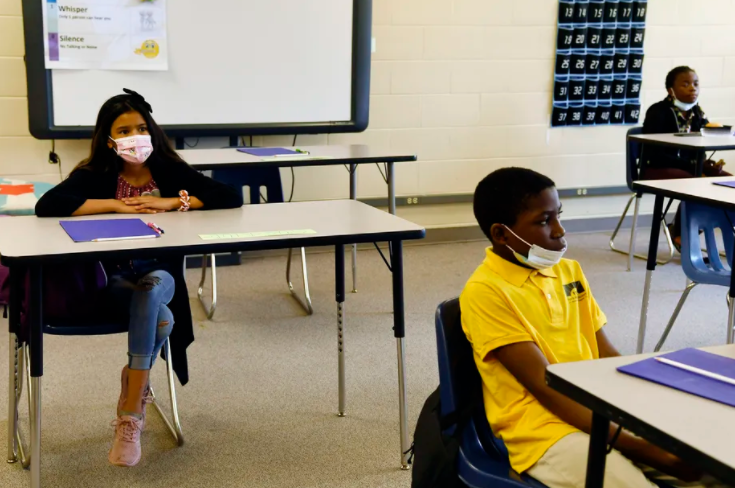 Between planned school closures and enrollment drops, the Aurora school district might not have jobs for some employees next year, but regardless, the school board has said it doesn’t want to cut staff. That sets up the district for difficult last-minute personnel and budget decisions.

Of more than 100 staff with non-probationary status who have jobs that will disappear, about 20 had not yet found new jobs in Aurora schools as of last week. District staff told the school board that they weren’t sure they would even need to make cuts, but that it was a possibility.

“The numbers are trending in a positive way, but at the same time, I cannot guarantee that I’m going to have another 20-plus positions that I would be able to move these folks into,” Damon Smith, the district’s chief personnel officer, said last week.

Superintendent Rico Munn told the board the district may have to continue paying protected employees who have lost their jobs but haven’t found other work in the district.

Enrollment in Aurora schools is expected to continue a yearslong decline, meaning each school gets less money since dollars are allocated per student. In January, building leaders receive their projected budget and have to decide how to cut to match the money they’ll have.

Aurora is closing two schools, and phasing out grade levels elsewhere. Those changes also displace staff who still have rights to jobs.

It’s not a unique situation. Enrollment has declined more steeply everywhere with the pandemic. It’s not clear if students who didn’t show up for school this year will return in the fall. Other districts are also closing schools.

To lay off protected employees, the district must follow state and district processes that give them priority in hiring.

Those who don’t land an open position are eligible to be cut. But the six-week deadline to launch that process, known as a reduction in force, already has passed for this school year.

Starting that process doesn’t always end up in layoffs, Smith said. In about 10 years in his position, he said, he has started the process three times, but reduced staff only once.

Even so Aurora school board members, citing the challenges and uncertainties of the pandemic, including in accurately predicting how many students may come back to schools next school year and therefore how many staff members will be needed, felt uncomfortable giving the district a green light. They voted 4 to 3 last week against permitting layoffs.

“What has happened this year is not normal,” school board member Stephanie Mason said. “It seems premature to move on a reduction in force when we don’t even know what that’s going to look like.”

After the vote board members sought to find out what their decision would mean.

Bruce Wilcox, the outgoing president of the union that represents teachers and other licensed staff, said many members are stressed and anxious.

“They still don’t know what’s going to happen to them,” Wilcox said. “We don’t know either. I just tell them you’re going to have to plan for the worst and hope for the best.”

Board President Kayla Armstrong-Romero voted to allow cuts and wondered if other board members would reconsider their vote. Member Kevin Cox wanted a more creative proposal.

“We’ve been hearing year round about teachers at their wit’s end,” Cox said. “And we lend them a sympathetic ear during the board meetings and we reply nicely in the emails, then we approve a reduction in force of their support?”

Armstrong-Romero said that the jobs targeted for elimination might not help alleviate teacher stress.

She said that ordering schools to keep employees without jobs for them could override principals’ authority.

But other board members disagreed, saying employees might be able to assist in some capacity.

“I’m willing to take the hit on the APS budget for maybe 10, 15, 20 extra staff members across the district, especially considering that it’s just going to be so hard right now from COVID,” Cox said.

Cox said he couldn’t imagine that principals wouldn’t welcome another person to help.

The board has not yet scheduled another meeting.

Superintendent Rico Munn said the district will continue to try to place the 20 staff members. This week a spokesperson for the district said affected staff have been advised it may take longer than usual to find them a placement.

If it ultimately doesn’t find matches, the district may have to keep paying them regardless.

Chief Financial Officer Brett Johnson said that to keep staff, the district may also have to reconsider its budget formula for all schools.

“We’re required by federal law to allocate dollars on an equal basis within schools,” Johnson said. “We can’t play favorites and decide one school gets more than another.”

To equalize the budget among its more than 40 schools, Johnson said the district would have to increase the budget for all schools by the same amount or ask some schools to cut a different job that wouldn’t lead to a reduction in force — for instance, cutting the job of a teacher who could easily be placed elsewhere.

Some board members suggested the district consider using COVID relief funds to cover the positions.

Marguerite Roza, the director of the Edunomics Lab at Georgetown University, said that the board is “avoiding making a tough or unpleasant decision.”

“If what you want is to have more staff this year than we would normally do, then lead with that and talk about at what cost and what are we getting out of it,” Roza said. “If they need a staff member to keep working with parents over the next school year, and they believe these staff members are the ones to do it, well then do that.

If districts genuinely worry that enrollment could change significantly, they “could buy time” by creating temporary positions, such as tutors, until enrollment figures became clear.

“The question is, are they making a decision that best meets the needs of their students?” Roza said. “If they can’t say that, then probably it’s misguided.”

This article was originally posted on Citing the pandemic and enrollment uncertainty, Aurora board blocked staff cuts