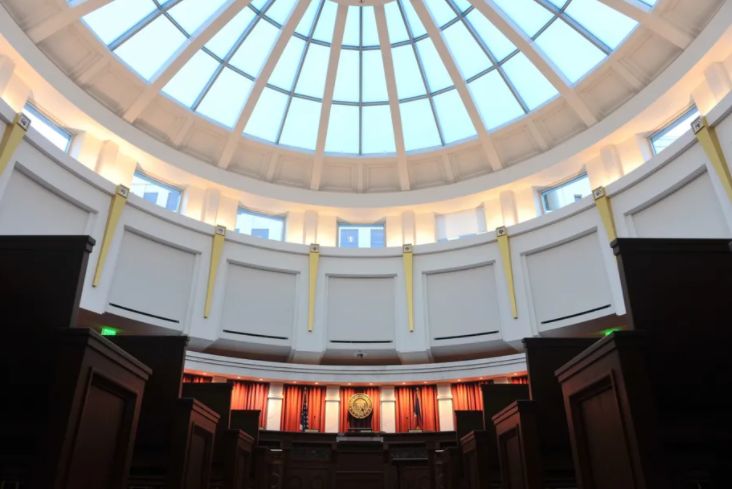 The plain language of Colorado’s Taxpayer’s Bill of Rights says that to raise taxes from one year to the next requires a vote of the people.

But what if voters agreed to keep school property taxes steady more than 20 years ago and state officials lowered them instead? Does it take another vote of the people to return tax rates to the previous level — or does increasing them simply correct an error?

That’s the question the Colorado Supreme Court took up Tuesday as lawmakers seek a solution to a vexing problem in school funding.

Colorado lawmakers sent the court a formal question — known as an interrogatory — last month seeking a constitutional ruling before they give final approval to a bill that would gradually increase local property taxes over 19 years.

If approved, the change would generate more than $90 million in new revenue for schools next year and more than $288 million a year when fully implemented. That would take a big bite out of the funding gap that Colorado schools experience when lawmakers hold back education dollars to pay for other priorities — but the money would come from local taxpayers, not state coffers.

The premise of the bill is that local tax rates are much lower than they should be due to incorrect application of the law by past state officials.

Back in the 1990s, most school districts got voter permission to keep revenue generated by existing property taxes. That should have led to tax rates remaining flat, but the Colorado Department of Education instead interpreted the 1994 School Finance Act to require property tax rates to go down, regardless of what local voters decided, so that revenue from those taxes didn’t increase too much.

In 2007, the legislature froze mill levy rates to stop further decreases, a decision the Colorado Supreme Court upheld in the 2009 Mesa decision.

The bill proposes to return mill levies, or property tax rates, to the same level they were at when voters chose to maintain them decades ago.

In briefs filed with the high court, supporters of the mill levy change said the reduction of rates in the past was illegal and should be considered void. During oral arguments, the justices asked questions about how long voter intent remains valid.

“I am a little concerned that we want to give effect in 2021 to voter decisions from 1996,” Justice Richard Gabriel said. “That doesn’t feel right.”

“There is no shot clock on voter intent,” responded attorney Mark Grueskin, who represented the legislature.

The basketball analogy refers to a rule that one team can only hold the ball for so long without shooting. In contrast, election results remain valid indefinitely, he argued.

Grueskin pointed to numerous other court rulings that government bodies can correct errors without triggering requirements under the Taxpayer’s Bill of Rights, or TABOR, to get voter approval. Rejecting this change would endanger the basic functioning of government, he said.

The offices of Attorney General Phil Weiser and Governor Jared Polis filed briefs in support of the mill levy change.

Republican lawmakers who object to the change filed their own brief, as did conservative groups Colorado Rising State Action and the TABOR Foundation.

They argued the mill levy change is a tax increase by another name. Taxes will be lower one year and higher the next, and “no amount of tax-policy presto chango is going to alter that simple truth,” attorney Dan Burrows wrote in a brief on behalf of legislators who oppose the bill.

And in Colorado, he said, that requires a vote. Allowing anything else would “swallow” TABOR, he said.

Opponents also argued that the Supreme Court shouldn’t take up the question at all, an argument that also prompted skeptical questions from the justices. Opponents described the issue as a political disagreement, with mostly Democrats on one side and mostly Republicans on the other, not a true constitutional issue.

“The legislature is not trying to get the right answer there,” Burrows said. “They’re trying to get political cover for a tax increase.”

If Democratic lawmakers believe they’re in the right, they should pass the bill, implement the changes, and then deal with any lawsuits that might arise in district courts, opponents argued.

Having trials around the state would allow more evidence to come out about whether the state education department was actually wrong to lower tax rates and whether the wording of different ballot measures in 127 school districts fits with the legislature’s theories.

It’s not known when the justices will rule. Lawmakers hope to get a response before the end of the legislative session so they know whether they can account for new revenue in the school finance act.

If the Supreme Court doesn’t give its blessing to this fix, the path to school funding reform becomes even narrower.

Unable to pass statewide tax increases for K-12 education, advocates of school funding reform have increasingly focused on trying to repair the patchwork of local property taxes and to restore some balance to school finance.

A previous proposal would have asked local school districts to hold elections to raise taxes and withheld state money from those that didn’t. But it was so politically unappealing it was never introduced as legislation.