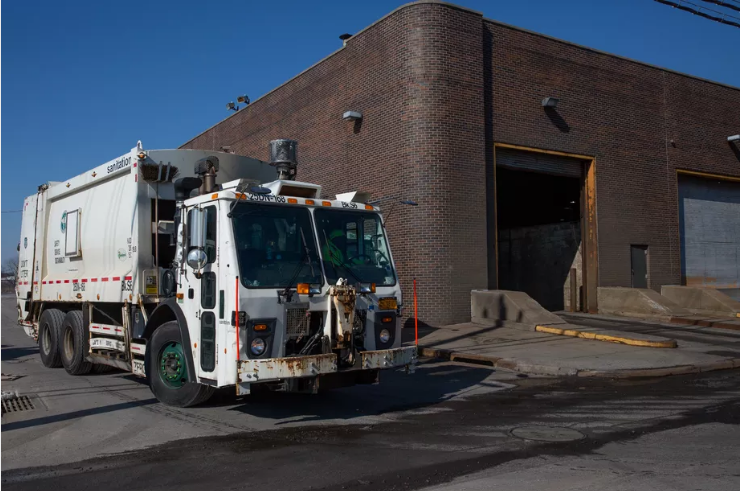 Mayor Bill de Blasio wants all city workers back in the office by May — but he might first take a close look at an alarming wave of COVID-19 infections that recently swept through a Sanitation garage in Brooklyn.

Late last month, 48 workers at the garage on Shore Parkway in Gravesend tested positive for the virus, forcing the city to temporarily shut the facility, according to union officials.

And that’s not the only case of COVID-19 clusters hitting frontline city employees who have yet to qualify for vaccination but must still show up for work.

Since November, according to union officials, 18 workers at a Parks Department locker room on the edge of Queens’ Flushing Meadows Corona Park caught the virus. And February saw five tradespeople in Brooklyn contract COVID-19 over a two-week period, union officials said.

The cases raise questions about de Blasio’s ability to fulfill the promise he made during his January State of the City address to “begin to bring back the rest of our city workforce in May.”

“The return of city workers across the five boroughs will be a signal to the world that the comeback is happening right here, right now, as New York City vaccinates millions of New Yorkers,” he declared.

That promise was based on his estimation that the city would soon be vaccinating 3,000 workers daily — a goal that has yet to be realized.

And while first responders, teachers and health care workers employed by the city have been receiving doses for more than two months, tens of thousands of other municipal workers have yet to be declared eligible by Gov. Andrew Cuomo.

That includes sanitation workers, parks enforcement officers and trades workers, as well as hundreds of office workers who process in-person requests for everything from food stamps to building permits. While many tasks have shifted online, work continues at city offices in all five boroughs.

None of these workers are eligible to be vaccinated, barring meeting health or age qualifications. The staffers have no idea when they’ll be greenlit for the jabs.

‘They Have to Work’

On Tuesday, de Blasio demanded that the state expand the pool of those eligible for vaccines to include a host of other city workers. As of Thursday, the state Health Department said the roster will expand only when more doses are available.

“Approximately 10 million New Yorkers are currently eligible to receive the COVID-19 vaccine, but due to limited supply, we encourage people to remain patient. As more vaccines become available, we will continue to expand the eligibility criteria, until every New Yorker who wants a vaccine can get one,” Jonah Bruno, an agency spokesperson, wrote in an emailed response to THE CITY.

Henry Garrido, executive director of District Council 37, the biggest city worker union with 150,000 members, worries that de Blasio’s back-to-normalcy drive is unrealistic given that the state’s refusal so far to expand the vaccine eligibility list to include most city workers.

“I understand this reluctance that you don’t want to approve more people until you have enough vaccines. But we have to get these people vaccinated,” he added. “They have to work. They cannot work remotely, yet they’re not part of the vaccination program.

Garrido noted that city workers have already paid a high price: As of last week, the families of 421 city workers — including some retired — whose deaths were either confirmed or likely COVID-related had applied for disability benefits. The list includes 73 teachers and five Department of Education support staff.

Sanitation workers are among those struck particularly hard: At the Shore Parkway facility in Brooklyn, close to 50 became sick with the virus late last month, union officials said.

“For a year we have been coming to work and getting sick. We can’t work from home,” said Harry Nespoli, president of the Uniformed Sanitationmen’s Association and chair of the Municipal Labor Coalition.

“It seems like he just forgot about us,” he said, referring to Cuomo’s decision to exclude the DSNY workforce from the vaccine. “Our people never stopped working.”

Meanwhile, city workers already required to show up at the office say that managers have often bungled the response when employees test positive.

Patrick Gallahue, spokesperson for the Department of Health & Mental Hygiene, which oversees the city’s pandemic response, described what’s supposed to happen like this: “Once notified of a positive test result, agencies work with the city to determine if the individual was at work while infectious and any additional steps that may be needed including enhanced cleaning in areas where the COVID-positive employee was working, and working with employers to identify who may have been exposed.”

But Garrido of DC 37 said it’s not working that way at all agencies.

“They’re supposed to contact the contact tracer program and they are supposed to notify the close contacts,” Garrido said. “That’s not happening in so many agencies. It is not. Instead the management takes it upon themselves to let people know they may have come into contact with someone. So if someone is exposed, the rate of exposure is not as clear.

And then the agency is responsible for performing a thorough deep-clean of the facility before workers are allowed back in. Garrido says that’s also not always happening.

Take the Parks Department office in Flushing Meadows Corona Park, known as the Passerelle Headquarters for its location on the ramp leading from Citi Field to the park. Originally opened as a public bathroom for the 1964 World’s Fair, the building now houses a large number of parks workers who have reported daily to work during the pandemic.

Inside are locker rooms and shift-change facilities for parks enforcement officers, parks cleaners and seasonal workers who perform multiple tasks throughout the sprawling park. In the last few months, the Passerelle got hit hard by the pandemic, according to Joe Puleo, president of 3,500-member Local 983, which is part of DC 37.

Puleo said between November and February, 18 Parks employees working out of the Passerelle — including urban park rangers, associate park rangers and seasonal aides — got COVID.

“Instead of shutting down the whole operation and testing everyone, they continued to run the operation,” Puleo said. “And that turned out to be a problem.”

Early in the frigid morning of Jan. 15, for instance, morning shift park enforcement workers showed up for work and were met by a captain who told them a colleague had tested positive for the virus the day before, according to DC 37. The captain initially barred anyone from entering the facility, telling them it was off limits until it was cleaned.

The captain then reversed course and let everyone in, instructing them to go in and get dressed in their uniforms to begin their patrol, the union said.

‘People are Getting Diagnosed’

She said the night before the workers showed up, the facility had been given what she described as a “deep cleaning” and that they were allowed in that morning two at a time “in order to ensure additional distance” to get their equipment for patrol.

“This was not mandatory and none indicated they did not want to enter the facility,” she added.

Howard insisted that “every space is given a deep cleaning after a confirmed positive case,” but that the places where an infected employee was working aren’t necessarily closed down “in their entirety if services to the public will be impacted.”

More confusion erupted last month at a Parks Department Nature Center in The Bronx’s Van Cortlandt Park. Conflicting protocols emerge in letters obtained by THE CITY sent to workers by the Parks Department’s director of labor relations informing individual staff members that one of their colleagues had just tested positive for COVID-19.

“I wish I was contacting you to share good news. Instead I am writing in an effort to be transparent and to fight against rumors fueling fear,” the Feb. 22 letter begins.

One worker was informed that the department has determined that “you do not fall in the group of potential close contacts” of the infected colleague, and therefore “are not under quarantine and should continue coming to work.”

That same day another parks worker got a similar letter stating “you have been identified as a possible close contact” of the worker who’d tested positive.

The letter specifically states “this letter is not a quarantine order,” and shifts the burden on to the employee — stating that if they “need to remain out of work and quarantine you must obtain a written order of quarantine from your doctor.”

“The letters are inconsistent,” said a Parks worker who spoke to THE CITY on the condition of anonymity for fear of angering management. “People are getting diagnosed. The agency is lagging in getting out letters notifying workers that a co-worker is positive. Here we are a year into this and they haven’t got their act together.”

Howard said: “When we are made aware of an infection, like at Van Cortlandt Park, we work to identify ‘possible’ close contacts of the employee, and encourage those to consult with their doctors on quarantining.”

Another agency that union officials say dropped the ball is the Department of Citywide Administrative Services (DCAS), where five workers at a trades shop on Kent Avenue in Williamsburg have become infected over the last two months.

DC 37 said DCAS did not let workers know that a colleague had tested positive, performed no cleanup and essentially went about business as if nothing had happened. Soon four more workers were infected, union officials said.

After the union confronted DCAS officials, they agreed to improve the communication with workers when a colleague gets infected, Garrido said.

Nick Benson, a spokesperson for DCAS, said when a manager learns an employee has tested positive, DCAS’ human resources unit contacts Test & Trace, informs co-workers of the situation and conducts “enhanced cleaning in areas where the COVID-positive employee was working.”

He declined to discuss the situation at the Kent Avenue shop except to insist that when the agency learned of any worker testing positive there “all appropriate protocols were followed.”