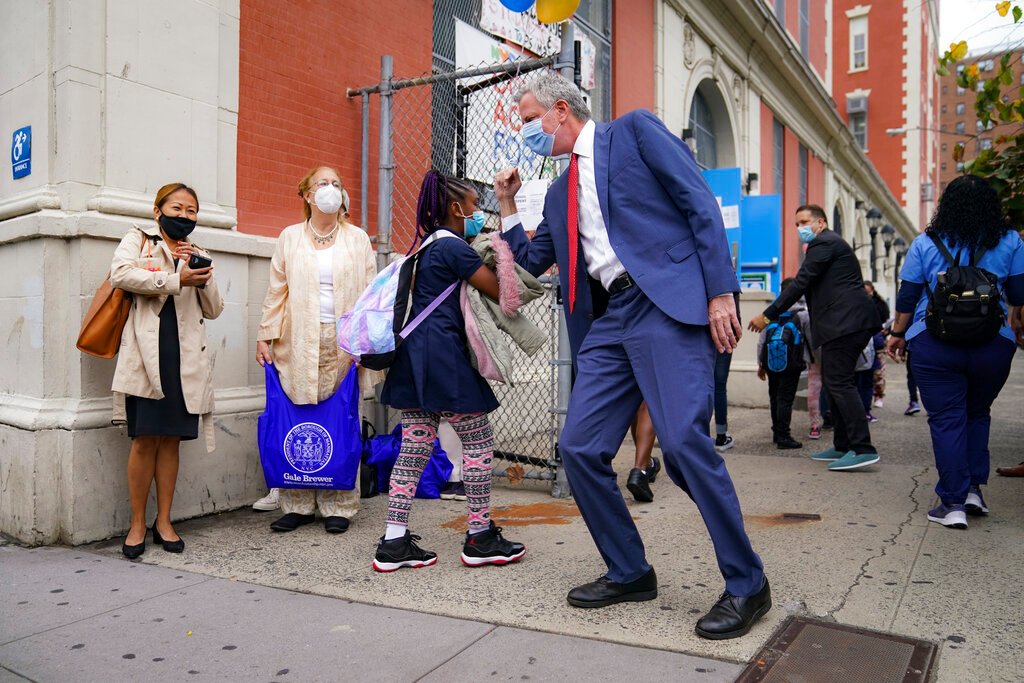 The goal for New York City schools next year is to have two options: five days a week in person or fully remote, Mayor Bill de Blasio said Friday.

Though the mayor has yet to reveal specific plans on what school will look like next year, the hints he dropped on WNYC’s Brian Lehrer show were the clearest yet about aiming to do away with the hybrid, or blended, model where students split time learning in classrooms and online.

The city is pursuing a full reopening of buildings for any student who wants to attend, de Blasio said, while also acknowledging that some parents may not be ready to send their children back to school. For those families, the city will likely offer a fully remote option.

“It’s our expectation that we can accommodate everyone, in person, five days a week,” the mayor said. “The fact is a lot is going to happen because it’s a long way from now, from March to September, and a lot could happen — good, bad or mixed — with the coronavirus. But my hope is that we have advanced so far by September that there’s literally no one who wants to be remote anymore.”

He added: “I do not foresee blended being a part of the equation any more.”

The hybrid model has proven particularly difficult for schools to pull off because it requires extra staffing for multiple versions of school: online and in person. Polling has found that parents across the country have also found it frustrating, and are more likely to be dissatisfied with the academic and social support their children are getting, while creating complicated childcare puzzles for families.

The mayor did not provide any details about how the city will solve the logical challenges of continuing to provide a remote option, such as whether virtual school would be run centrally by the education department or by individual schools.

The mayor also promised to provide more details “next week” about the city’s plan to reopen high school buildings, which have been closed since November.

De Blasio’s plan for next year makes many assumptions, perhaps the biggest being that socially distanced classrooms will no longer be necessary — and that families and educators will feel comfortable returning. Those could prove to be tall hurdles, with new strains of the coronavirus circulating in the city, and no vaccines approved yet for children. De Blasio has underestimated the importance of building public trust before: After pushing to reopen schools this summer, about 70% of families decided to keep their children home.

But the mayor said that parents shouldn’t expect this fall to look anything like the current landscape, touting the ramp-up of vaccine supply and vaccination sites. The city has already administered at least one dose to more than 2 million people.

“There’s a lot moving and changing, and of course, the schools have just been absolutely, consistently safe,” de Blasio said. “Folks who are trying to judge September according to today’s reality are making a mistake.”

The city’s plans to deal with pandemic-related school disruptions and reopening in the fall have lagged compared to many other school systems across the nation, which have already laid out plans for extended summer school classes and tutoring efforts, for example.

Officials in New York City have said schools will focus on supporting mental and emotional help, and rely on virtual solutions to help students catch up on missed learning, but even those plans have been vague.

“We’re already late planning for next year,” said Mark Cannizzaro, president of the union representing principals and other school administrators.

The federal government is expected to earmark 20% of its education stimulus money to addressing “learning loss,” and Cannizzarro believes that schools should be empowered to make their decisions, in consultation with their school leadership teams and superintendents, on how to tackle these problems.

Cannizzaro was hopeful that individual schools could potentially handle full remote learning if they didn’t also have to offer hybrid learning and had enough lead time to figure out how many students would opt into the different modes.

“This year we’ve had to hire so many substitute teachers. Too many kids had to change teachers during the course of the year. That caused another level of anxiety,” he said. “This is completely avoidable for next year if we start planning now.”