Please ensure Javascript is enabled for purposes of website accessibility Denver is standardizing school start times to improve bus service, but some families complain of unanticipated changes - THE CHICAGO HERALD Press "Enter" to skip to content 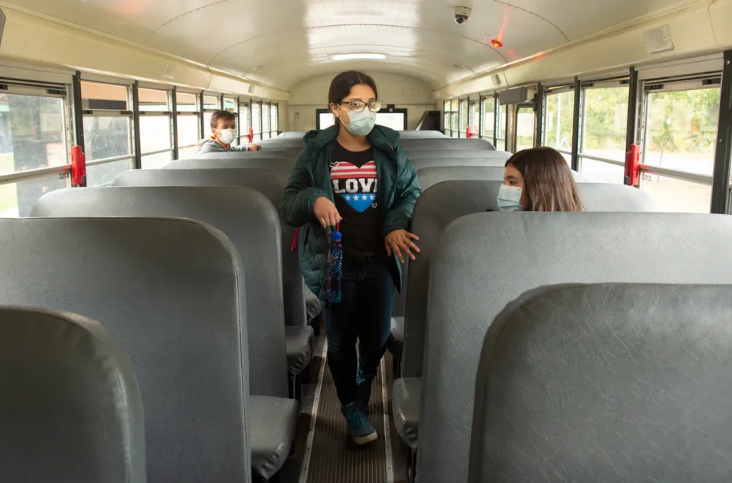 In a bid to restore school bus service to pre-pandemic levels and recruit more bus drivers, the Denver school district is standardizing school start times. District officials say the changes are necessary to avoid busing cuts, but the new bell times will mean big shifts for some families.

Before the COVID-19 pandemic, Denver schools had from 20 to 30 different bell times each year, which Denver Public Schools Chief Financial Officer Jim Carpenter said was inefficient and too often resulted in buses being late. This fall, most district schools will start in one of three time windows: 7:30 to 7:40 a.m., 8:05 to 8:25 a.m., and 8:50 to 9:10 a.m.

The hope is that the new system will improve the reliability of the district’s buses, as well as avoid service cuts and boost employee satisfaction. The district is short about 55 bus drivers, which Carpenter attributed to a nationwide shortage of commercial drivers. The new bell times will offer drivers longer shifts because they’ll be able to serve two or three schools back-to-back. Longer shifts will mean higher wages, making the jobs more attractive, Carpenter said.

The tradeoff is that it may require schools and families to adjust their routines.

“We recognize this is a real change for schools,” Carpenter told the Denver school board last week. “This has significant impacts on families.”

In some cases, school start times may change by 40 minutes or more. And it might not be the last time the district changes bell times, with a resolution under consideration to have middle and high schools start later to allow teenagers to get more sleep.

The adjustments succeed a previous plan to shift bell times by no more than 15 minutes per school to increase efficiency and save the district about $4 million. The new shifts are bigger for many schools and would not save the district any money, but would allow it to transport as many students as it did before COVID — arguably better and more safely.

Parents got a first look at proposed bell times earlier this month when the district shared a spreadsheet in its weekly email to families. The district has since finalized the schedule and plans to communicate it to families later this week, a district spokesperson said.

Judging by the spreadsheet, Farrah Lamoreaux may have a kid in each bell time tier next year.

Lamoreaux’s children can walk or bike to school when the weather is nice. But when it’s snowy, rainy, or cold, the new bell schedule could have her doing six dropoffs and pickups.

“I work from home so I can have some flexibility to help with this kind of stuff,” Lamoreaux said. “But I’m essentially losing two hours of work.”

Some parents told the school board they’d specifically chosen their child’s school because the bell times worked for their family. They lamented that the district didn’t tell parents about the bell time changes until April, two months after the first round of school choice — during which families can request to attend a different school — had closed.

“Families were not consulted about these new proposals, but it’s families who will be impacted most,” said Ryan Crane, who has two children in Denver schools.

District officials said they consulted school principals about bell times. Each principal was granted their first- or second-choice time, Carpenter said. In line with the district’s focus on equity, Carpenter said his department also gave more weight to the preferences of schools that serve high percentages of students receiving subsidized meals, an indicator of poverty.

Furthermore, Carpenter said he and his staff worked with individual principals to address concerns and troubleshoot issues caused by the shifting bell times. One possible solution for elementary schools involves using federal COVID stimulus dollars to expand the district’s before- and after-school care, known as Discovery Link, he said.

But even though principals were consulted, some still have concerns. Kurt Dennis, principal at McAuliffe International middle school, said he’s worried about the proposed 4:40 p.m. end time for his school. In December and January, when the sun sets early, he could be releasing 11- and 12-year-olds into the dark, and his bus riders would likely get home after 5 p.m.

“We all recognize that transportation is super challenging, and improving the quality and reliability of the service is important to students and families,” Dennis said. “My frustration is that, are we going about this the right way? Do we need to jeopardize student safety or their ability to participate in after-school activities? Is this really necessary?”

The district has said it will add lighting and cameras to enhance safety at schools that are dismissing students later.

But more bell time changes may be coming. The school board is considering a resolution that would require all middle and high schools to start at 8:30 a.m. or later. The resolution is a response to studies that show adolescents are healthier when they get more sleep. It cites research that teenagers’ sleep timing is delayed by one to two hours, making it difficult for them to fall asleep early enough to get a full night’s rest before an early bell time.

If the school board approves the late start times, they would go into effect in the fall of 2022.

This article was originally posted on Denver is standardizing school start times to improve bus service, but some families complain of unanticipated changes