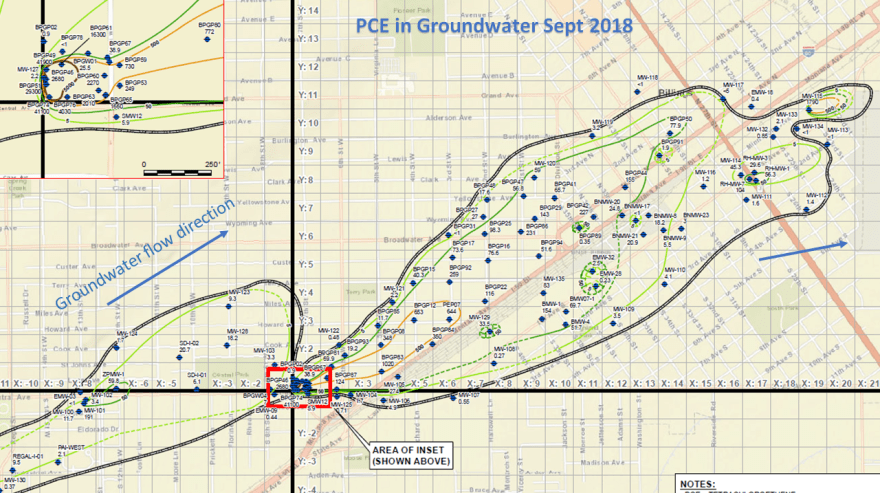 A three-mile-wide swath of central and downtown Billings where groundwater has been contaminated with chlorinated solvents from laundromat operations is set to receive federal Superfund status per a notice issued by the Environmental Protection Agency Wednesday. Superfund status enables access to federal funding and expertise for cleanup projects aimed at protecting human health and the environment.

The chemical of primary concern at the Billings site is tetrachloroethylene, or PCE, which has been detected in an 855-acre plume of contaminated groundwater. EPA said there are no known drinking water wells along the site. Residents and businesses above the plume are on city water. The bulk of the contamination concern centers on vapors that drift up from the pollution source into overlying structures, where they can accumulate.

“Exposure to chlorinated solvents from inhalation has been associated with short-term effects such as nausea as well as long-term conditions, including neurological, liver or kidney effects, and certain cancers,” according to an EPA press release about the Billings site’s inclusion on the agency’s National Priorities List, a compilation of the country’s “most serious uncontrolled or abandoned releases of contamination.”

EPA Community Involvement Coordinator Ryan Kloberdanz said in an email that the contamination is believed to have started in the 1960s. Three current or former dry cleaning sites — Central Avenue Laundry, Big Sky Linen Supply and Rex Linen — are located within the site’s footprint near the head of the plume. The site has also been contaminated with petroleum hydrocarbons leaking from underground storage tanks.

The state of Montana recognized it as a state Superfund site in 1992. The Montana Department of Environmental Quality identified the site as a high priority for cleanup and issued a remedial investigation report in 2019.

“Due to the size and complexity of the facility, DEQ and EPA have been in agreement that National Priorities List (NPS) designation under federal Superfund is the most feasible path forward to secure the resources needed for a comprehensive and long-term cleanup solution,” DEQ spokesperson Kevin Stone said in an email.

DEQ will be a coordinating partner on the project, with EPA as the lead agency working on the cleanup.

Stone said DEQ received reports of potential health impacts while working with EPA on indoor air sampling investigations. He said the Department of Public Health and Humans Services can work with individuals who have contamination-related health concerns associated with the site.

Kloberdanz said it’s too early to estimate how long the cleanup will take. The agency first has to expand on the DEQ’s remedial investigation and conduct a feasibility study to identify and evaluate cleanup options, he said. He added the work is not expected to involve relocation of residents or businesses.

Remediation of PCE vapors is a relatively new undertaking for the EPA, according to Stone, who said he expects that most of the remediation work will be fairly nonintrusive to businesses and residents located above the plume.

The agency said the cleanup stands to benefit nearby Billings residents in terms of both public health and economic impacts. Residential property values increase up to 24% within three miles of Superfund sites after cleanup, according to the agency.

Kloberdanz said the agency “has not as yet identified any financially viable potentially responsible parties capable of contributing to the cost of cleanup” and that investigation is ongoing.

Chlorinated solvents also played a part in the May 2000 designation of a 580-acre Superfund site east of Billings in Lockwood. Local wells there were contaminated with benzene and chlorinated solvents used to clean truck trailers. Cleanup of that site is ongoing.

The Superfund program was established in 1980 when Congress passed the Comprehensive Environmental Response, Compensation, and Liability Act. There are 19 Superfund sites in Montana. Twelve sites in other states were also identified for inclusion on the National Priorities List in the agency’s Sept. 9 announcement.