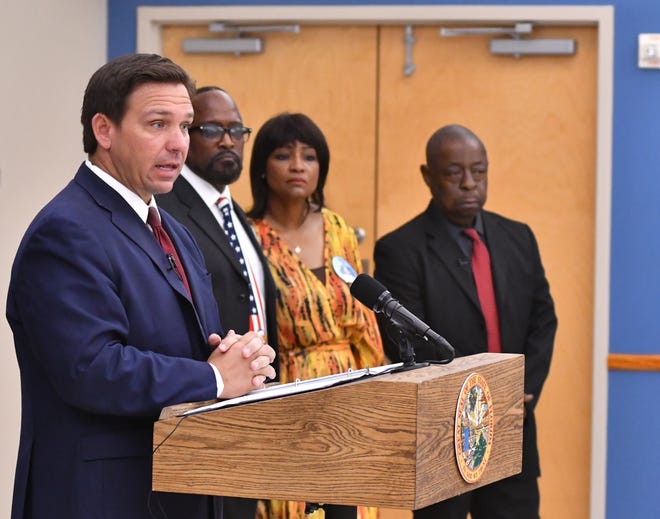 It’s taken three years of dog-chasing-tail debate among Republicans about whether it’s a tax increase or merely a mechanism to collect an already-levied tax, but Floridians could be paying sales taxes on every online purchase beginning July 1.

That is, if Gov. Ron DeSantis signs Senate Bill 50, which was delivered to his desk Monday after it was passed on April 8 by both the House and the Senate.

The governor has not expressed any views regarding the attempts led by state Republican Party chair Sen. Joe Gruters, R-Sarasota, to install an “e-fairness” provision in state tax laws requiring online retailers to collect and remit sales taxes since 2019.

DeSantis has until April 19 to act on SB 50 or it automatically goes into effect beginning July 1. His January $96.6 billion Florida Leads budget request did not include e-fairness legislation.

When asked by reporters in January about mandating retailers remit online sales taxes, DeSantis obliquely replied, “There’s no tax increases in our budget. We’re not going to do that.”

Florida and Missouri are the only two of the 45 states that levy sales taxes that have not tweaked tax collection regulations in the wake of 2018’s South Dakota v. Wayfair Supreme Court ruling that confirmed online retailers must collect and remit state sales taxes.

SB 50 mandates online retailers that sell at least 200 items or $100,000 worth of items remit the state’s 6-percent sales tax, and whatever sales taxes are levied by local governments, to generate an estimated $1.3 billion in annual revenues for state and local governments.

After failing to gain traction during the 2019 and 2020 sessions, Gruters introduced a “revenue-neutral” provision, similar to a Missouri proposal, to his 2021 bill directing money generated by online sales taxes into the state’s Compensation Trust Fund to avoid raising unemployment taxes state businesses pay.

Before the pandemic emerged last March, Florida businesses paid $7 per employee in annual unemployment taxes. The rate went to $49 this year and could jump to $87, proponents said.

The “revenue neutral” provision overcame reticence by some Republicans that constituents would view the measure as a tax hike, although there was a growing consensus among lawmakers of both parties that the “e-fairness” measure was necessary to help state businesses.

The bill was supported by the Florida Chamber of Commerce, the Florida Retail Federation and other business groups that argued for years it is unfair brick-and-mortar businesses must remit sales taxes while out-of-state sellers do not.

The House amended SB 50 to direct revenues from online transactions into slicing back the state’s commercial rent tax, or business rental tax (BRT), from 5.5 to 2 percent, once the state’s Unemployment Compensation Trust Fund is replenished.

The Senate quickly, in fact on the same day, endorsed the amendment and sent SB 50 to DeSantis’ desk in a 27-12 vote, with all opposition coming from Democrats.

Democrats were not objecting to SB 50 as a tax increase, but to dedicating all revenues generated by collecting what essentially was money left on the table exclusively to lowering the state unemployment and BRT.

SB 50 is the second bill adopted during the 60-day legislative session that ends April 30 to arrive thus far on DeSantis’ desk.

On March 29, he signed SB 72 into law three days after it was adopted, instantly installing extensive COVID-19 liability protections for Florida businesses and health care providers.