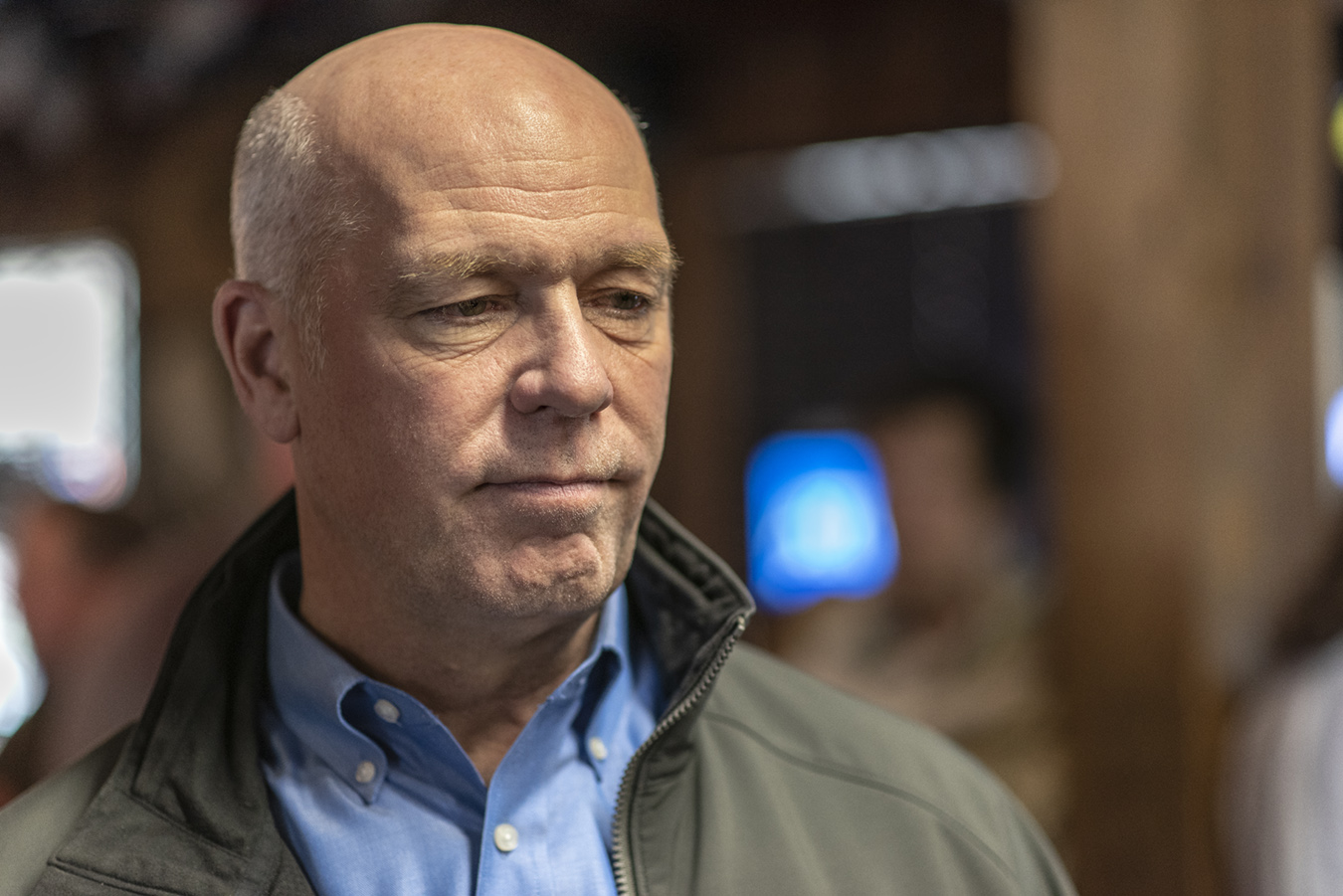 Gianforte stresses ‘resilience’ in first State of the State address

In his first State of the State address, Gov. Greg Gianforte emphasized Montanans’ resilience, work ethic and willingness to help each other as key qualities that will help the state emerge from the COVID-19 pandemic.

Notably affirming the presidency of Joe Biden and avoiding a politicized response to pandemic-induced public health measures, Gianforte presented a largely measured, pragmatic tone in his opening remarks at the Capitol Thursday evening. He said he looks forward to the day he can safely throw his mask in the trash and leave it behind, but until that day he said he will wear one, and he urged others to do the same.

In an address that covered everything from tax policy and starting teacher salaries to bills restricting abortion and his plan to respond to the state’s struggle with substance use disorders, Gianforte also spoke about his personal history with Montana and celebrated Montanans’ resourcefulness in the face of the pandemic.

On the economic front, Gianforte highlighted many of the programmatic areas he campaigned on with his Montana Comeback Plan: cutting regulatory red tape, revising tax policy, and supporting educational programs and economic opportunities that will bring young adults back home to the state, or discourage them from leaving in the first place.

He outlined several programs embedded in his budget proposal that he said will advance those efforts, including the Business Investment Grows Jobs Act, a measure he says would eliminate the business tax burden for 4,000 small businesses in Montana.

COVID-19’s economic impact played heavily into specific business-related policies highlighted during the address. Gianforte urged the Legislature to pass Senate Bill 65, which would shield public-health-compliant businesses, nonprofits and health care providers from certain COVID-19-related lawsuits, and called “lifting arbitrary restriction on limited hours of operation and capacity for restaurants and other small businesses” an important step in Montana’s economic recovery.

He also said he would direct his staff to seek the dismissal of lawsuits filed against five businesses in Flathead County by former Gov. Steve Bullock’s administration over compliance with public health mandates.

“A pandemic with severe economic fallout is bad enough,” he said. “We don’t need government piling on as well.”

Reforming addiction treatment was another prominent theme of the address. Gianforte specifically named meth as a source of concern, saying 44% of the children in the state’s foster care system are there due to parental meth use. To combat addiction, Gianforte said he will expand addiction treatment and recovery programs and add five new treatment courts around the state.

“Three years after completing treatment court, 70% of graduates are clean and holding a job,” he said.

He also called for tax revenue collected from I-190, the citizen ballot initiative legalizing adult-use marijuana, to be allocated to programming that will “provide for a full continuum of substance abuse prevention and treatment programs for communities.” That drew standing applause from GOP lawmakers in attendance, and little enthusiasm from Democrats.

The governor highlighted starting teacher pay in championing the Tomorrow’s Educators Are Coming Home (TEACH) Act, which aims to help Montana claw its way out of the bottom teacher-pay ranking nationally by providing $2.5 million in incentives for schools to boost pay for junior teachers. Those remarks drew broad applause from lawmakers.

In contrast, the reception to Gianforte’s comments on abortion was largely partisan.

“We must protect the lives of our most vulnerable — unborn children,” he said, before urging lawmakers to pass House Bill 136 and House Bill 167. The former would broadly restrict access to abortions after 20 weeks of gestation, and the latter would create a ballot referendum  establishing penalties for providers found not to have given life-preserving care to newborns.

Gianforte briefly referenced another partisan piece of legislation popular with the GOP base — Miles City Rep. Kenneth Holmlund’s bill to ban sanctuary cities — before circling back to plans for investment in judicial infrastructure. He noted that his budget proposal includes funding for two new district judges and 14 parole and probation officers.

“Native American women face a murder rate 10 times higher than the national average, and 84% experience some form of violence in their lifetime,” he said. “Time is of the essence and we must act quickly to curb this tragic trend. I ask the Legislature to send to my desk a bill to extend the Missing and Murdered Indigenous Person Task Force.” That effort has enjoyed broad support from both parties.

Energy policy was largely absent from Gianforte’s address, despite the fact that it has garnered significant attention from both the governor and Montana’s congressional delegation since President Joe Biden’s inauguration on Jan. 20. Gianforte has been vocal about his frustration with the Biden administration’s decisions to rescind TC Energy’s Keystone XL permit and ban new federal oil and gas leases, but he didn’t mention either issue, or his approach to climate change, in his address.

Gianforte briefly touched on natural resource extraction when introducing Amanda Kaster, the new head of the Department of Natural Resources and Conservation. He said he’s directed Kaster to “bring more federal lands into active forest management to prevent catastrophic wildfire, have healthier forests, improve wildlife habitat, and bring back some of our good-paying Montana timber jobs.”

In his closing remarks, Gianforte strove for a note of unity, emphasizing shared desires and priorities.

“Like you, I want our kids to enjoy a better life. Like you, I want to leave our state better than I found it. And while we have our differences on policy, that ideal is what motivates everyone who serves here,” he said.

Immediately following Gianforte’s State of the State address, Rep. Laurie Bishop, D-Livingston, delivered an 11-minute rebuttal that thematically overlapped with the governor’s address in many ways. Like Gianforte, Bishop highlighted the economic hardships created by the pandemic and celebrated determination and endurance as key to overcoming them.

“It’s our job to create an economic recovery that will help our communities rebuild stronger than ever and bring jobs and opportunities to all Montanans in every corner of our state,” Bishop said.

Bishop only briefly mentioned “unprecedented attacks on Montana’s women and children” — an apparent reference to Republican-sponsored anti-abortion measures and trangender-restriction bills —that have dominated the early weeks of the legislative session. Economic issues and the need for policies that support “all Montanans” dominated Bishop’s remarks.

Bishop spoke about the need for broadband infrastructure in rural and tribal communities, calling it “as necessary to growing our economy as bridges and roads,” and drew a comparison between tax policy that Democratic lawmakers are promoting and Gianforte’s tax proposals.

“After the governor proposed a $30 million giveaway to Montana’s wealthiest that only puts $14 in the pockets of middle-class Montanans, we didn’t just send a press release. We advanced a tax package focused on giving Montana’s working and middle class a real break.”

Bishop also emphasized issues where the Legislature’s Democratic caucus has diverged from prominent Republican legislative priorities, like funding for the Department of Public Health and Human Services.

“After Republicans moved to cut $1 billion from our health care system, we didn’t just oppose it, we responded with a comprehensive health care package that lowers costs and creates jobs,” she said.

Shifting her attention to unions, Bishop referenced workers’ rights to organize, saying it “remains essential to maintaining a thriving middle class.” That was an apparent reference to House Bill 168, which had a hearing last Friday and is strongly opposed by union representatives.

In her closing remarks, Bishop again brought economic opportunity to the fore. She said Democrats remain committed to “defending opportunity for all who reach for it,” and that Democratic lawmakers “welcome the chance to work with anybody who works for these values.”