Please ensure Javascript is enabled for purposes of website accessibility Gov. Greg Abbott and other Republicans blamed green energy for Texas’ power woes. But the state runs on fossil fuels. - THE CHICAGO HERALD Press "Enter" to skip to content 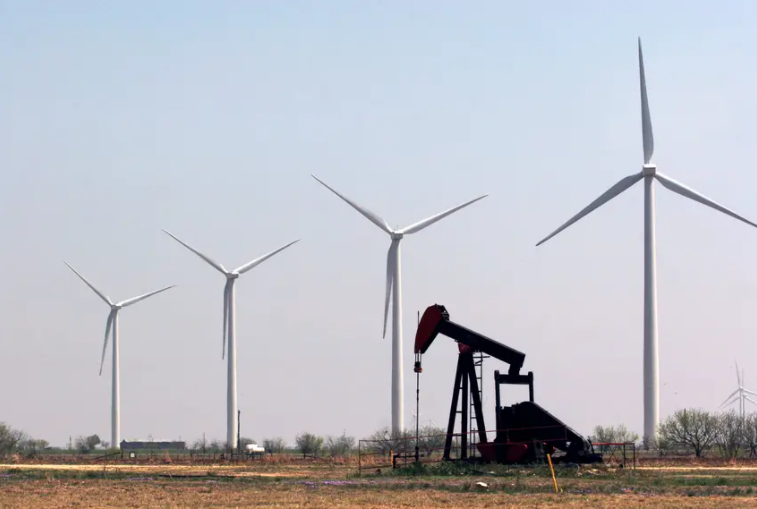 Gov. Greg Abbott and other Republicans blamed green energy for Texas’ power woes. But the state runs on fossil fuels.

Millions of Texans didn’t have power Tuesday night, and the arctic blast was still pummeling the state. Many were looking for answers on why they were stuck in the cold and when their heat would return. And Gov. Greg Abbott was being interviewed on Fox News, decrying the Green New Deal — a massive framework of climate change policies that don’t exist in Texas.

Abbott said in an interview with Sean Hannity in the middle of a crisis that “the Green New Deal would be a deadly deal for the United States of America.” Ignoring that experts and officials agreed that a disruption in energy powered by fossil fuels was the biggest culprit behind Texas’ outages, Abbott added that losses in wind and solar energy “thrust Texas into a situation where it was lacking power in a statewide basis.”

Dan Woodfin, senior director at the Electric Reliability Council of Texas, had said hours earlier that 16 gigawatts of renewable energy, mostly wind power, had gone offline as of Tuesday. But that made up only about a third of the lost power on the state’s grid. Nearly double that capacity had been lost from thermal energy sources like gas and coal. And ERCOT forecast in November that wind energy would make up less than 10% of the overall winter capacity.

The outages have raised questions about the state’s handling of and preparation for the winter storm. Officials knew wintry weather was coming; why hadn’t they been warned about possible disruptions? Why weren’t the power-generating sources that went offline — wind, natural gas and others — better equipped to withstand winter weather? And why didn’t the state have more power in reserve?

Abbott has taken some steps to look into what went wrong for the state, declaring the management of the state’s electrical grid an emergency item for this year’s legislative session and applauding plans for investigations by the state Legislature. But he wasn’t a particularly visible presence for Texans during the storm. He delivered a handful of local television interviews in addition to his appearance on Fox News. His first press conference after the weather hit came more than 60 hours after the widespread power outages began.

In his public comments before that press conference, he wasn’t shy about casting blame. Not only did he denounce the Green New Deal, but also ERCOT, which operates the grid.

“The Electric Reliability Council of Texas has been anything but reliable over the past 48 hours,” Abbott said Tuesday.

During his news conference Wednesday, which began more than 45 minutes late, Abbott described the weather forecast, discussed energy production capabilities, urged Texans to call plumbers if their pipes are frozen, and listed off the assistance from the federal government. He invited other state officials to detail the help state agencies were providing. But he did little to acknowledge the state’s failure in preparedness, even though there were several warning signs. He also didn’t concede any possible underlying policy failures in his opening speech.

“The last time the state dealt with something like this was actually in 2011,” Abbott said. “That led to changes with regard to ERCOT, but also the power system in the state of Texas.”

He said a similar review will happen now and, without mentioning specifics, said the state might reconsider some of the changes it made then.

Pressed on the comments he made to Hannity, Abbott said he was only trying to convey that it would be a challenge for the state to rely solely on green energy, which did lose significant power-generating capacity during the storm. He said he has repeatedly mentioned that there have been problems with other sources of energy, too.

“I was asked a question on one TV show about renewable, and I responded to that question,” he said of the Green New Deal comment.

Victoria M. DeFrancesco Soto, assistant dean for civic engagement at the University of Texas at Austin Lyndon B. Johnson School of Public Affairs, is an expert in political psychology. She said politicians typically try to blame other things during crises “to keep their brand clean.”

“You don’t want to be associated with negative incidents because we think about things in terms of association,” DeFrancesco Soto said. “When folks go into the ballot box, they see a symbol, an R or a D, and then based on how campaigns have worked, both offense and defense, they’ll try to link certain things, good and bad, to that brand.”

In terms of voting behavior and political psychology, she also said the imminence of an election — or lack thereof — also plays a role in how politicians react to natural disasters, but there are no elections slated for this year. Abbott is up for reelection in 2022.

“If we had an election coming up next month, then that would be disastrous for the party in power, in this case the Republicans, but we don’t. The impact of something of this magnitude is very real, but it dissipates over time. A year and a half from now, it’s not going to be as vivid and it may not have as much of a political impact,” DeFrancesco Soto said.

Texas Republicans are probably not going to accept any responsibility for failing to regulate the state’s power grid because politicians from either party usually don’t accept responsibility for natural disasters in terms of preparedness, said John Higley, professor emeritus in government and sociology at UT-Austin.

“If you go back to Hurricane Harvey and all the damage done in Houston along the coast, nobody took responsibility for that. And no one’s going to take responsibility for this disaster either,” Higley said. “There will probably be an investigation of some sort, but it won’t really change the situation. I mean, you’re looking at a well-entrenched profit-making system with powerful interests invested in that system. They’re not about to cave to an investigation.”

Democrats have blasted Abbott for his response, saying in a press release, “There is blood on Abbott’s hands.”

“Crisis after crisis, Greg Abbott has failed and passed off blame to somebody else. Texas is in dire straits,” said state Democratic Party Chair Gilberto Hinojosa. “Texans are dying. Homes are being destroyed, people are cold and hungry, and we have no idea when things will begin to return to normal because our state Government continues to fail.”

Meanwhile, the focus from conservatives on wind power is nothing new. Renewable energy has regularly been a conservative punching bag during energy disruptions — whether they’re because of snow storms in Texas or scorching heat waves in California.

When California experienced power outages and rolling blackouts last year, U.S. Rep. Ronny Jackson, a Republican who was, at the time, the presumptive next representative in his Panhandle district, tweeted, “This is what the Biden/Harris plan for our energy sector looks like. Corrupt ‘green’ policies that leave us in the dark, and Texas energy workers out of a job.” U.S. Rep. Dan Crenshaw, R-Houston, mocked the state’s energy disruption by tweeting, “Alexa, show me what happens when you let Democrats control energy policy.”

Democrats like Beto O’Rourke and U.S. Rep. Alexandria Ocasio-Cortez of New York, one of the forces behind the Green New Deal, fired back at Abbott for his criticism of the climate change proposal and his overall handling of the crisis.

“As with Covid, a natural disaster has become far deadlier due to the inaction & ineptitude of Abbott and Texas’ Republican leadership,” O’Rourke tweeted Tuesday. “Energy experts and State House Dems, among others, were warning of this for years. Abbott chose to ignore the facts, the science and the tough decisions and now Texans will once again pay the price.”

“I go offline a few days and return to a GOP Gov blaming policies he hasn’t even implemented for his own failures. Gov. Abbott doesn’t seem to have a grasp on his state, so here’s a reminder: Texas runs 80-90% on fossil fuels,” she wrote. “The real ‘deadly deal’ is his failed leadership.”

This article was originally posted on Gov. Greg Abbott and other Republicans blamed green energy for Texas’ power woes. But the state runs on fossil fuels.