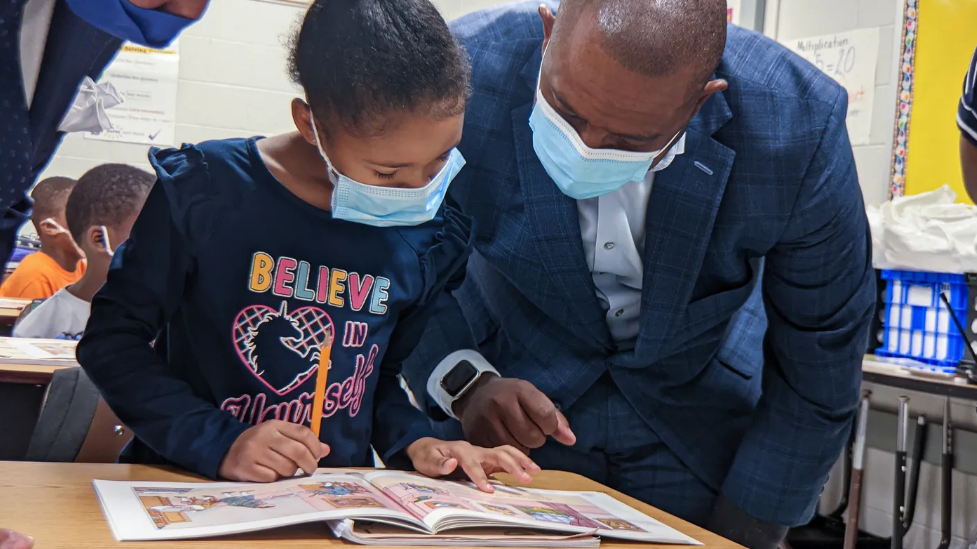 Here’s what year-round school could look like in Memphis

Superintendent Joris Ray grabbed Memphis parents and students’ attention last month when he floated the idea of year-round schools. It was one of several new initiatives Ray announced in his annual state of the district that focused on boosting academic achievement and recovering from pandemic learning loss.

Ray emphasized that the district is only exploring a year-round school calendar at this point, and that there’s no set timeline for a shift. But for district administrators, teachers, school staff, and families alike, changing the structure of the school year is a daunting prospect.

Memphis-Shelby County Schools is among a growing number of districts — including Lee County Schools in Florida, Cincinnati Public Schools in Ohio, and Iowa City Schools in Iowa — exploring a year-round calendar in recent years to help alleviate overcrowded classrooms and aid academic recovery in the wake of the pandemic.

Anntriniece Napper, president of the Memphis-Shelby County Education Association, worries about high school students who work full-time jobs during the summer to supplement their families’ incomes. And teachers, she said, so far have mixed feelings about the proposal: While some would appreciate more frequent breaks during the year, others would mourn summer break, when many pick up second jobs.

“I haven’t really heard a consensus yet. At this point, (teachers) are just trying to survive these last nine weeks of school after spring break,” Napper said with a laugh.

Making the switch to a year-round calendar would require teacher and family buy-in, which could prove difficult: Nearly 70% of 1,500 parents across the nation said they did not support a longer school year, according to a University of Southern California survey in November. Just over 65% of those parents also opposed a shorter summer vacation.

Some schools that adopted year-round calendars later switched back. Missouri’s Francis Howell School District, which is believed to be among the first year-round school districts in the country when it shifted to the model in 1969, elected to return to a traditional calendar in 2010. Facing a projected $6 million budget shortfall, board members argued they couldn’t afford nor justify with academic research $1 million in extra transportation and educational costs. In Memphis, Caldwell and Rozelle elementary schools shifted to a balanced calendar over two decades ago only to later abandon it.

Others worry that a year-round school calendar could disrupt students’ sports, extracurriculars, and part-time jobs, and wonder how parents will find child care during frequent breaks throughout the year. Others dread the idea of losing the traditional summer break that many students and educators cherish.

However, proponents say that the end of summer break is a misconception: While school would operate almost all 12 months a year, it doesn’t mean the end of summer vacation or that students will spend more time in school. Instead, most schools that adopt the so-called balanced calendar operate the usual 180 days, and the school year is broken into “intercessions’’ in which students attend school for about nine weeks at a time, then get two- to four-week breaks in between — including a typically-longer break during the summer.

Although research is mixed on whether year-round school leads to academic gains, supporters say it can improve school climate: By having more consistent breaks throughout the year, proponents say, burnout among teachers and students is better prevented. Educators and administrators also say that many students benefit from more consistent learning and access to school resources beyond the classroom, and schools can utilize breaks for remedial programming for struggling students.

A 2014 Congressional Research Service report found that the number of schools on a balanced school calendar had increased ninefold over the last three decades. As of this school year, experts estimate about 4% of the nation’s about 50 million public schoolchildren attend balanced calendar schools.

Ray is the second Memphis superintendent in recent years to consider it: Former Memphis Superintendent Dorsey Hopson suggested making the shift in 2017, saying the district’s summer learning academy would serve as a testing ground to track students’ progress. In its first several years, the academy fell short of its academic goals for the program.

Ray suggested last month that if school were to continue through summer months, the summer academic slide could be prevented. Additionally, if students have more consistent time to focus on reading and math, Ray believes the district could see overall academic gains.

In reality, though, the jury is still out on whether year-round school actually boosts learning.

A 2016 report by Paul Von Hippel, an associate professor at the University of Texas in Austin who is known for his research on summer learning, revealed that, on average, year-round calendars have not improved student achievement — though they may have benefits for low-achieving students if the calendar is combined with substantial remedial instruction during intersessions.

The study also questioned whether balanced calendars truly benefited economically disadvantaged students the most. Although poor students in year-round schools appeared to perform slightly better in reading than those on traditional calendars, there were no increases in math.

Proponents of balanced school calendars also question whether existing research, which often relies on standardized test scores that vary from state to state, actually paints the full picture. The 2014 Congressional Research Service report noted that research on the topic is “inconclusive and lacking in methodological rigor.”

David Hornak, now the executive director of the National Association for Year-Round Education, has tried to fix this problem.

When he started teaching kindergarten nearly 30 years ago, Hornak immediately noticed the exhaustion that many educators feel about midway through October every year — “like clockwork,” he recalled with a laugh. Twelve years into his teaching career, when Hornak became principal of a year-round school, that all changed.

Hornak focused his dissertation on year-round school: At the beginning and end of the school year, he tested a sample of 275 students from select Midwestern schools that serve predominantly economically disadvantaged students. He found that, regardless of economic status or gender, children who attend year-round school with a summer recess of six weeks retained more mathematical knowledge than their counterparts who have a 12-week summer break.

Now the superintendent of Holt Public Schools in Michigan, where two schools operate on a balanced calendar, Hornak continues to see the positive impacts of year round school daily — and they stretch beyond academics.

While schools on a traditional calendar effectively lose their students for 13 weeks every summer, balanced calendar schools more consistently remain in contact with children and families, and can provide them with resources like mental health support, free books, and meals.

Those schools may also use the additional time for optional remedial instruction for students who have fallen behind, and extra academic enrichment for those who are ahead.

“Our academically talented students love intercession because it’s a different type of learning and we get to stretch their brain,” Hornak said. “Our kids who are struggling appreciate it because they actually get to come back and we can remediate their gaps in learning in real time.”

In her first year teaching health at a year-round middle school in the Raleigh, North Carolina area, Meghan McCoy is enjoying the benefits of the school calendar. Every nine weeks, just as teachers start to burn out and students get tired and restless, the school breaks for three to four weeks.

Although McCoy, a basketball coach, initially worried about the impact the calendar would have on practice and games, so far, she hasn’t had any problems. During breaks, McCoy is able to schedule practices in the mornings or mid-day instead of the evenings, something that she, her players, and their parents like, as long as they’re scheduled in advance so families can plan transportation. And without grading and lesson planning during those weeks, McCoy can also focus on being a better coach.

“It helps students and teachers kind of hit the reset button,” McCoy said. “You relax, take a break away from the everyday routine, and come back refreshed.”