Please ensure Javascript is enabled for purposes of website accessibility Holcomb sues speaker over HB 1123; warns of 'severe' disruption if not struck down - THE CHICAGO HERALD Press "Enter" to skip to content

Home » Holcomb sues speaker over HB 1123; warns of ‘severe’ disruption if not struck down 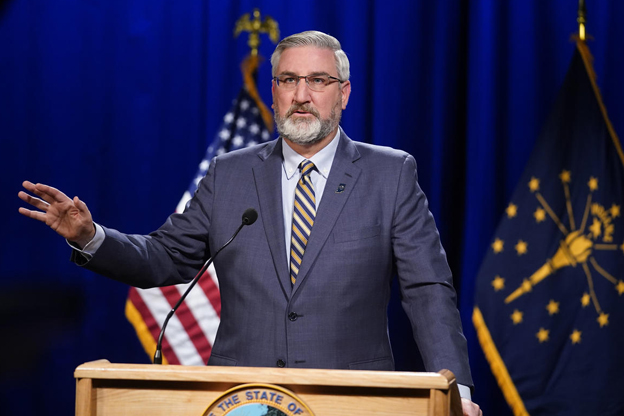 Holcomb sues speaker over HB 1123; warns of ‘severe’ disruption if not struck down

Indiana Gov. Eric Holcomb filed a lawsuit Tuesday against the speaker of the house and the senate leader, challenging the constitutionality of the bill passed that would allow the legislature to call itself into a special session after a declared state emergency.

The suit claims by passing the bill House Bill 1123 the Indiana General Assembly is “usurping a power given exclusively to the governor under Article 4, Title 9 of the Indiana Constitution.”

Both houses of the Indiana General Assembly voted to pass HB 1123 earlier this month, and after Holcomb vetoed it, voted to override that veto by a vote of 59-26 in the Indiana House of Representatives and 36-8 in the State Senate.

It was the first time the Republican-dominated legislature had stood up to Holcomb on the issue of the state’s response to the COVID-19 pandemic, as most legislators have been confined to the sidelines for the last year as the governor issued executive order after executive order related to masks, occupancy restrictions, elective surgeries, and business operations, holding daily and then weekly press conferences.

But HB 1123 was seen only as a mild attempt on the part of legislators to assert their authority as lawmakers and policymakers, and to clip the governor’s wings.

The bill, now a law as the governor’s veto was overridden, allows a “legislative council” made up of 16 members of the Indiana General Assembly to meet and decide whether to call the legislature into a special session after the governor has declared a statewide emergency.

The special session could last no longer than 40 days, and the only bills that it could pass would be those related to the state of emergency.

The bill also mandates that any federal stimulus funds not spent or committed before April 29, 2021 must be deposited into special accounts and placed under control of the Indiana General Assembly.

The governor’s lawsuit was filed in Marion County Circuit Court in Indianapolis, and Marion County is also listed as a plaintiff.

The suit warns that HB 1123 “will be disruptive to the State of Indiana” and says its very existence “has created uncertainty and confusion.”

“This controversy must be resolved as soon as possible or the consequences could be severe, including disruption to Indiana and the proper functioning of state government – something that concerns every Hoosier,” it says.

The thrust of the suit is that under the Indiana Constitution, only the governor appears to have the authority to call a special session of the legislature.

The suit quotes from both the original 1816 Indiana Constitution and the 1851 Constitution, which replaced it. Both say that governor “may” call a special session.

“The right and authority to call a special session is clearly, unequivocally, and exclusively a function of the governor,” the lawsuit reads. “As such, neither the General Assembly nor the Legislative Council can exercise this function since the Indiana Constitution does not expressly allow for it.”

What the law does allow is for the Indiana General Assembly to vote to end the state of emergency – which would immediately prevent the governor from issuing any more executive orders under the state’s Emergency Disaster Law.

But two resolutions introduced this year that would have done this – one authored by Rep. Curt Nisly, R-Milford, and another by Rep. J.D. Prescott, R-Union City – were denied a vote, despite together having more than half the Republican members of the House listed as co-authors.

In adjourning last week, however, the Indiana General Assembly appears to have left itself some options. Instead of closing out the legislative session, House and Senate leaders extended it by law until November — meaning that members can be called back to resume their legislative work without anyone having to call a special session.

This article was originally posted on Holcomb sues speaker over HB 1123; warns of ‘severe’ disruption if not struck down