Home » How educators from across the U.S. would spend new funds 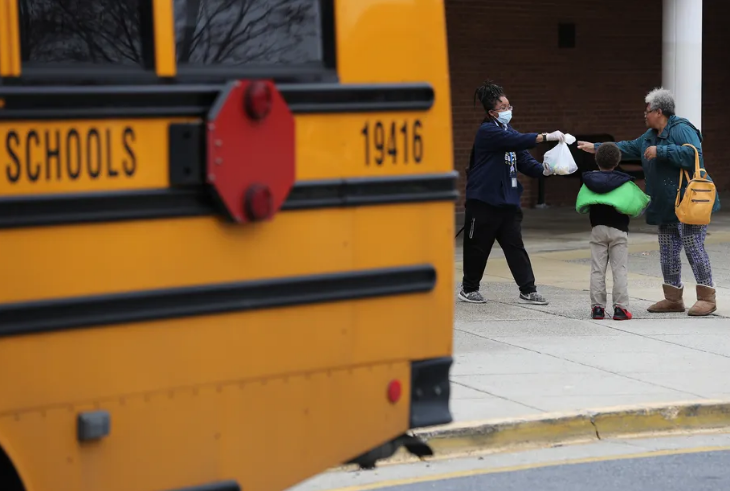 How educators from across the U.S. would spend new funds

Kathryn Butler has stitched together a patchwork of resources to support the nearly 500 homeless students who attend her school district in Greenwood County, South Carolina.

She asks local companies to give students new winter coats and shoes. She partners with the local cosmetology school to offer students haircuts. And she runs drives to collect clothing, toiletries, and bedding, which she stocks in a school storage room dubbed “Kathryn’s Closet.”

She does all that to help stretch the $60,000 she usually gets from the federal government to help homeless students. But the latest federal stimulus package has Butler hoping she’ll be able to do a lot more. It includes $800 million specifically to help homeless students — eight times as much as the federal government has spent annually on those students in recent years.

Imagining what she could do for her students with that is like “living in the land of the Wizard of Oz,” Butler said.

For now, it’s unclear how exactly that money will get to students, as the federal education department has yet to spell out how it will be distributed. It’s also unclear what school officials will be able to spend it on. Usually, federal funds for homeless students come with a lot of restrictions. But the new law is broad and says the money can be used to identify homeless students, help them attend school, and offer them wraparound services.

We asked five educators who work with students experiencing housing instability how they’d like to see this new money spent, and how it could help students in their communities. Here’s what they said.

As the coordinator of the Adelante Program for Santa Fe Public Schools, Attiana Virella-Fuentes counts herself lucky to have a team of 12. Together, they work to support some 800 homeless students and their families.

The pandemic has made their task tougher. Many families are unable to pay rent or are experiencing food insecurity for the first time, and don’t know how to get help or what their rights are. Others are too embarrassed to reach out.

“The pandemic has created more shadows for people who don’t want to be found,” she said.

With additional money, Virella-Fuentes would like to be allowed to give students stipends if they’re missing class to work. That could get students back into classrooms without worrying that “their family may not be able to eat,” she said.

Another top priority: keeping students housed. Many parents fell months behind on rent when they lost their jobs in the service industry or cleaning homes, and they’re just now starting to get work again. Helping families pay back rent would help them hold onto the housing they have long-term.

Even better, she said, would be helping families afford a deposit and a few months of rent in advance — enough to help them make the difficult financial transition out of a motel, for example. That would help a lot with school engagement, Virella-Fuentes said, since those living spaces typically offer little room or privacy for kids doing schoolwork.

“I’d love to be able to provide families with some grace period to start working, start saving,” she said. “If you’re digging yourself out of a hole at every moment of the day, it can be hard to move ahead.”

Helping students get to school

Kathryn Butler has worked with homeless students in Greenwood County, South Carolina for over two decades, so she’s no stranger to the particular challenges facing her largely rural community. There are few shelters or transitional housing options, so many of the families she works with are living “doubled up” with friends or family. Transportation is a big challenge: There’s no public transit and some families don’t have cars.

The new federal funding averages out to around $580 for every homeless student in the country — nearly 1.4 million students were considered homeless during the 2018-19 school year. If some of that makes it to Butler, she’d want to use it to buy a van or SUV that could be used to take homeless students to school or to bring them supplies, like a new hotspot. Right now, she said, a student’s sudden move can mean they miss several days of class.

She also wants to fulfill her longtime goal of installing more washers and dryers in school buildings where students and their families could use them whenever they need them.

“It would be a huge boost for their self-esteem,” she said.

Keya Flakes has seen up close how Denver’s affordable housing crunch is affecting the students she works with. Many families who have children in the city’s public schools are on waiting lists for subsidized or transitional housing, she said. While they wait, many families must split up to stay with family and friends.

Flakes experienced something similar when she lost her home in a fire several years ago, and she draws on that knowledge to help families.

“Having that person who is able to stay calm, and making sure that they have the things that they need to have their students enroll in school,” she said, can “alleviate some of that weight and that stress.”

Her team served around 2,150 homeless students last school year, but those numbers are down a bit this year. Anna Theisen, who oversees the district’s program for homeless students, said they got fewer referrals this fall when classes were virtual — something that happened at a lot of school districts. The federal eviction moratorium has also helped to keep more students housed, but Theisen says her team is “very worried” about what will happen once it lifts in June.

With additional federal money, Theisen says her team would like to help families pay their first month’s rent and deposit, and hire a “navigator” who can assist families in finding housing. They’ve also discussed creating an emergency fund to pay for food, clothing, car repairs, or storage fees. Flakes wants to be able to offer hotel vouchers to families with shorter-term needs, too.

“When people hear of families that are experiencing homelessness, they automatically think that this is a chronic experience for this family, and it’s not always that situation,” she said.

Asking students what they need

Jordann Lankford spends a lot of time building trust with her students in Great Falls, Montana.

She’s a teacher and academic advisor who runs a dropout prevention program for American Indian students that weaves in lessons she crafted about the culture and history of eight Great Plains tribes.

She estimates 40% of the students she works with are homeless, often staying in motels or couch surfing. Sometimes students are living in a home with several families and caring for other children, which can make it hard to concentrate on schoolwork.

“It’s a great demonstration culturally of what family means to American Indian people and their willingness to open their homes and take care of each other,” Lankford said. “But they also know the consequences, too.”

When school was virtual, Lankford rotated visiting five students per day to pick up their schoolwork and drop off food baskets. But it can be hard for families to ask for help because they feel shame, or worry the government will take their children away — a fear rooted in a long, traumatic history.

She remembers she once arrived at a student’s home while police were doing a welfare check. Her student handed her her math homework as it was happening. “It’s things like that that I don’t think a lot of educators realize,” she said. “Unfortunately, your work that you have for this student isn’t the most important thing that they have to do.”

Things have improved since her district started offering in-person instruction this fall, she said. Looking ahead, she’d like to see federal funding used to set up a centralized hub where students could do their laundry, take a hot shower, and connect to the internet. Right now, those services are spread out across her community, and the youth center has limited hours.

She also wants to host a listening session where students and their families have an opportunity to tell the district what would be most helpful to them.

“They and their families need to be able to tell us what they need,” she said, “instead of us just deciding what’s best for them.”

This article was originally posted on How educators from across the U.S. would spend new funds