Please ensure Javascript is enabled for purposes of website accessibility In Chicago, free college for 4,000 students and their parents; ‘This means so much’ - THE CHICAGO HERALD Press "Enter" to skip to content

Home » In Chicago, free college for 4,000 students and their parents; ‘This means so much’ 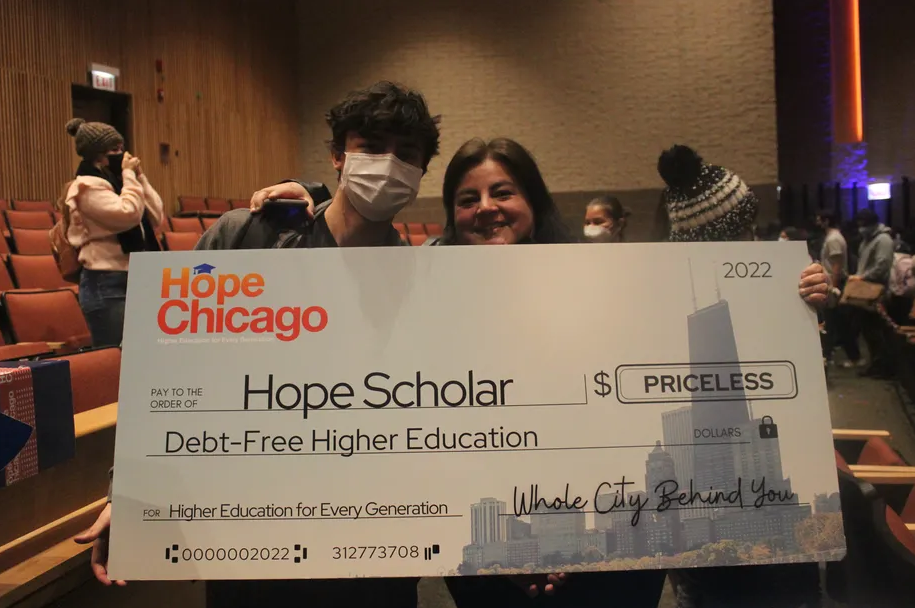 In Chicago, free college for 4,000 students and their parents; ‘This means so much’

Inside a packed auditorium at Benito Juarez Community Academy, Senior Maria Vazquez sat in shock. She had just found out that she, her classmates, —  and their parents — would get their college education paid. In full.

Tears streamed down her face as she searched for her parents in the auditorium.

Before the life-changing news, the price of college had limited her educational prospects, said the 18-year-old daughter of Mexican immigrants.

“Now, the possibilities are more open,” Vazquez said. “This is an opportunity I never thought I would get.”

On Tuesday, Vazquez was among 1,700 students at the Lower West Side school to be awarded the first round of college scholarships for seniors, the school’s underclassmen, and their parents through Hope Chicago, an education nonprofit led by former Chicago Public Schools CEO Dr. Janice Jackson.

The unprecedented scholarship program in Chicago will award 4,000 students across five high schools — and their parents — college scholarships at about 20 Illinois institutions. Unlike free scholarship programs in other cities that have caught on across the past decade, there’s no minimum GPA requirement to qualify.

The scholarship will go toward tuition, room and board, books, and fees — making it easier to pursue a higher education without the financial burden often associated with a college degree.

The Chicago scholarship announcements come as national data emerges showing plummeting numbers of students enrolling in college amid the pandemic.

Hope Chicago plans on raising and investing $1 billion in scholarships to Chicago students and their parents over the next decade. The scholarship would be available to students regardless of immigration status, said Benito Juarez principal Jose Ocon.

For years, a national debate has brewed over the affordability of higher education, a discussion that has only intensified since the start of the pandemic.

During the morning assembly at Juarez, Jackson applauded the senior class, who had their high school experience disrupted by the pandemic. The former district CEO told students they had “the whole city behind you.”

“As a life-long educator, I understand the barriers that college students face as they enter the higher education system,” Jackson said. “Many of those — financial, social, psychological and emotional — have been further exaggerated by the COVID-19 pandemic hindering student success.”

By working with community, civic, and business leaders, this is an “opportunity to redefine the education landscape in our city,” Jackson said.

Despite the pandemic’s disruption, Chicago Public Schools saw an uptick in students graduating — with 83.8% of students finishing school within five years in 2021, compared with 82.5% in the previous year. And while more of the district’s students are enrolling in college, there have been dips in college persistence — that is, the number of local students who stay enrolled in post-secondary institutions — across the past decade.

In a recent survey, Chicago Hope found 90% of ninth grade students wanted to go to college, but only 63% enroll and about 27% graduate from college, according to the nonprofit.

Following the announcement, the auditorium erupted in cheers with some parents and students jumping to their feet to hug one another.

Parent Esmeralda Bue wiped away tears, saying she was “beyond excited” for her senior and junior sons. The mother, a current graduate student studying social work, said she understood the financial strain that comes with getting into college, but was working to figure out a path for her sons to get a degree.

The unexpected announcement made it that much easier. “This means so much,” she said through tears.

Gov. J.B. Pritzker lauded the nonprofit, calling the scholarship announcement “transformative” for the city and state. Getting a debt-free education, Pritzker said, was a “groundbreaking initiative” unlike any other that would support two generations — students and the parents — in “one bold action.”

The governor acknowledged that finances are a major factor for students not going to college, with students finishing college with an average of about $28,000 of student loan debt. Pritzker said he was pursuing ways to make college more affordable across the state.

Chicago Public Schools CEO Pedro Martinez, an alum of Benito Juarez, echoed the excitement around the scholarship opportunity for students and their families.

Martinez, who was the first in his family of 12 to graduate high school and college, said he recognized the struggles that he faced are still the same struggles students face today. But with the scholarship, money wouldn’t be an issue, he said.

After the assembly, senior Ruben Flores, 17, said he was “excited” and “thankful” for Hope Chicago. Like his classmates, he always planned on going to college but worried how he’d be able to pay it.

“My mom was very happy” to hear the news, Flores said.

Parent Carolyn Vela was overcome with emotion and began to cry after hearing the announcement. “I just couldn’t believe it,” Vela said.

Since her husband died, Vela, who is still paying off student loans, wondered how she’d be able to help put her son through college.

“I’m still in debt to this day, and I’m just so happy he won’t have to go through it,” Vela said, choking back sobs. “It’s everything I ever wanted for him.”

Her son Andres Ibariaz called it a “big surprise” and “big shock” to everyone.

For Vazquez, the Juarez senior, the scholarship will not only change her life, but also the life of her family.

“This is going to open the door to this generation, a generation of immigrants, and future generations,” Vazquez said.

This article was originally posted on In Chicago, free college for 4,000 students and their parents; ‘This means so much’