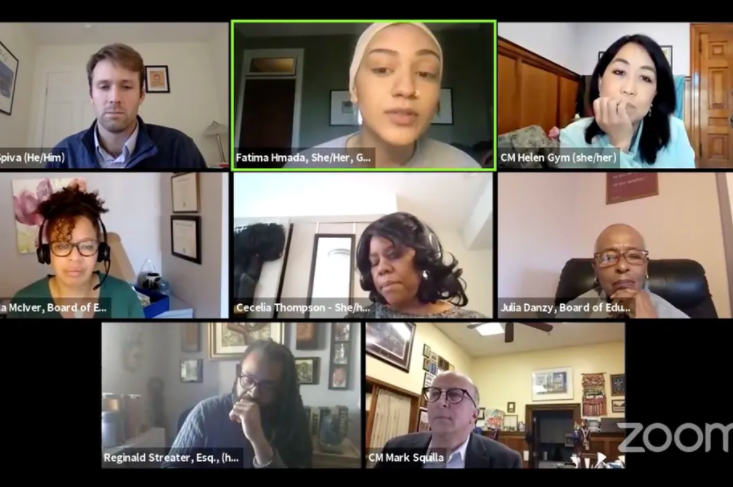 Fatima Hmada, a senior at Science Leadership Academy at Beeber, refuses to accept the notion that there are limited resources to help students experiencing homelessness in Philadelphia.

She said the school district has “vowed to remove educational barriers” for students with insecure housing. But she asked members of the City Council and school board what they are doing to help such students during the pandemic.

“But what about when we aren’t in school? What about in the middle of a deadly pandemic? What is the city doing for houseless youth right now,” said Hmada, a member of Girls Rock Philly, a student organization.

Hmada was just one of many students who spoke Tuesday during a virtual town hall about budget priorities for the nearly $1.3 billion in federal relief going to the Philadelphia school district.

The event was broadcast on Facebook Live and hosted by Councilmember Helen Gym. Councilmember Mark Squilla and members of the city’s Board of Education, including Julia Danzy, Angela McIver, Reginald Streater and Cecilia Thompson, were also on hand to hear from students. During the town hall, students also had the opportunity to chat in “safe spaces” with two licensed clinical social workers.

Last month, district officials announced that they plan to spend the federal coronavirus relief money on building repairs and upgrades, academic recovery programs, and programs and personnel to help students deal with trauma resulting from the pandemic. While the plans include some “additional administrators” for schools, especially those with more than one building, the plan doesn’t directly respond to school principals, who have been advocating for the addition of at least four permanent positions at all schools, including an assistant principal, full-time reading and math coaches, and a special education monitor.

But students Tuesday expressed the need for other services such as more nurses, staffing support, LGBTQ-friendly campuses and language services for immigrant students.

“Being a queer, non-binary Black student at a school that people would expect to be the most accepting and open minded within Philadelphia is not the case,” said Margot Coleman, a junior at Creative and Performing Arts High School. “I have to deal with depression and social anxiety on a daily basis that affects me in my schoolwork.”

Colleen Pan, a sophomore at Northeast High School, expressed the need for translators for the district’s sizable immigrant student population. She also spoke about lacking school materials and unclean buildings. “This not only affects the progress of student learning, but also our attitude towards learning,” she said.

Jaydyn Henderson, a junior at the Academy at Polumbo, said the district should make mental health services a priority. “We’ve been using the mobile support — we’re only just starting to talk about it more because of the impact of COVID,” she said. “But the mental health of students should have been a priority.”

Aleena Tan, a junior at Central High School, said the district should prioritize repairing the unsafe conditions of school buildings.“There are many stories of students and teachers getting sick from breathing in these chemicals at school,” she said. “The district had more than a year to fix this issue since schools were unoccupied.”

Gym said Tuesday’s town hall is what a student-centered agenda must look like.

“We’re committed to getting you the supports, our door is always open,” Gym said.  “We have our marching orders. To my colleagues on the City Council and the Board of Education, we look forward to working together to enact all of this.”

McIver, a school board member, thanked students for speaking out.

“I know that a lot of us have not done right by you,” she said. “It’s clear. I just want to thank you for your advocacy and for being able to speak today. It won’t make up for all the past. But the pressure you’re bringing to our city to ensure that we do something now is so important.”

This article was originally posted on In emotional testimonies, students discuss needs for federal relief money going to Philadelphia schools