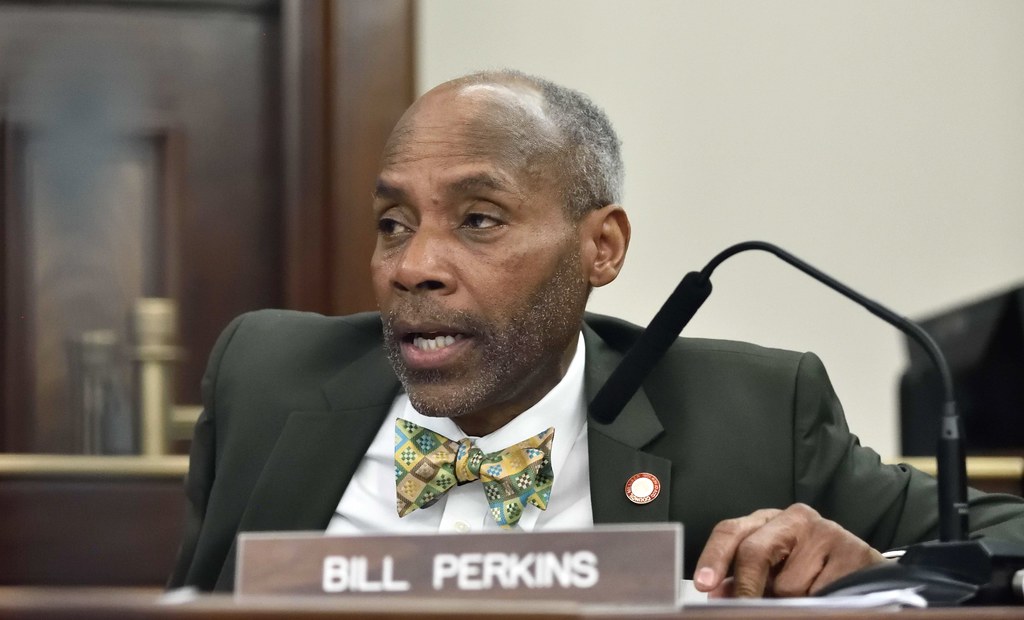 An influential last-minute entrant has joined the crowded field for Central Harlem’s City Council district: the incumbent. But colleagues and constituents raise serious concerns he may not be fit to meet the demands of the job he currently holds.

Councilmember Bill Perkins is running for re-election in District 9, his longtime aide Keith Lilly confirmed to THE CITY in a call Wednesday, the day after city candidates began to petition to collect voter signatures needed to appear on the June 22 primary ballot.

“He’s going to be on the petitions,” Lilly said.

Perkins’ 2021 campaign is not yet registered with the city Campaign Finance Board, which monitors candidate fundraising efforts. That does not, however, preclude him from getting the necessary signatures by the March 25 deadline and snagging a spot on the ballot.

The move brings new questions about Perkins’ ability to perform his duties.

Some of Perkins’ Council colleagues, Harlemites familiar with his work and a former member of his staff told THE CITY they’ve seen signs of apparent memory loss and disorientation from the 70-year-old veteran politician in recent years.

Syderia Asberry-Chresfield, the co-founder of the Greater Harlem Coalition, said she’s known Perkins for at least 20 years. She first became concerned about two years ago when, in a meeting at his office, Perkins “didn’t remember some of the past accomplishments that he’d made,” she said.

“Even when he was reminded of what he had done, he couldn’t grasp the information,” she said. “And that’s when I realized something was wrong.”

She said she sees Perkins from time to time on the streets of Harlem, but has not spoken with him since before the start of the pandemic.

“Sometimes he recognizes me. Sometimes he does not,” she said. “I’ve known him for decades now.”

Among his colleagues, Perkins’ health challenges are “the worst kept secret in the New York City Council,” said one Council member who serves with him on a committee.

Three Council members who spoke with THE CITY on condition of anonymity said Perkins would often wander into closed-door meetings, or show up to the wrong committee hearing, or at the wrong time.

“There’s no question he isn’t all there,” said another Council member.

Now, while Council business is conducted remotely, Perkins’ public appearances largely have been limited to a Zoom window. Aides appear to assist him with the mute button and guide him when it comes time for a vote, his colleagues said.

Perkins was briefly hospitalized two years ago after his neighbors called police on the Council member for alleged erratic behavior inside his apartment, the New York Post reported at the time. Perkins said then that treatments from his battle with cancer were to blame. He was diagnosed with colon cancer in the early 2000s.

Neither the Council member nor his staff replied to multiple requests from THE CITY for comment. Calls to his Harlem home went unanswered.

When asked whether he believes Perkins is fit to run, Lilly said, “Yeah!” without hesitation.

“I’ve got him. I’m carrying him. He’s on the petition, so I don’t have no problem with him at all. Most people don’t,” he said before quickly ending the call.

In a text message a short time later, Lilly added: “There isn’t anything to say. I don’t have the authority or the power of attorney to question anyone’s health but mine and my parent. More importantly, I’m not a doctor.”

If elected, Perkins would serve for a shortened two-year term due to redistricting rules, a spokesperson for the Council said. He would also be eligible to run again for another two-year term in 2023, for a total of four more years in his seat.

Adams served as the community cultural associate in Perkins’ office between 2009 and 2015. Even then, he remembers Perkins talking during long staff meetings — about an upcoming event or an issue in the neighborhood — then launching back into a speech on the same topic, seemingly oblivious about repeating himself.

“From time to time, he would casually remark about his ‘memory issues,’ as he termed it,” Adams recalled. “He would say, ‘Well, you know, my memory is not good, but I remember this.’”

The writer, historian and Harlem tour guide was let go from his job in Perkins’ office with “no explanation,” he said. This year, Adams is supporting challenger Cordell Cleare, who from 1998 to 2016 served as Perkins’ chief of staff in the Council and State Senate.

Adams insisted he is speaking out not as payback for losing his job or because of his support for Cleare, but because he believes Harlem is “beleaguered by the pandemic and under continual threat from gentrification.” Perkins, he said, has been “missing in action.”

“As he has gotten progressively worse with this malady, he’s been less and less able to care for that community,” he said. “He is in the process of destroying a commendable record that he created through his insistence on continuing to be the representative of people — but not having the ability to represent them well.”

Perkins has served Harlem for years, first in the City Council between 1998 and 2005, then as the area’s state senator for the next decade. He resigned and re-joined the Council after winning a special election in 2017.

All those who spoke of Perkins to THE CITY underscored his powerful activism and accomplishments in both the Council and state Senate — where he fought for protections against childhood lead poisoning, equity in education funding and many other issues — as well as his intelligence and fierce convictions.

“He never had any interest in being a ‘get along, go along’ person,” said a Council colleague. “And it costs him in terms of relationships in politics. But it also, I think, won him a lot of love from people in his community.”

Asberry-Chresfield said it’s a “sad turn of events” for someone who “contributed so much to the neighborhood.”

But at this point, “we can’t have him for another year,” let alone two or four, she said.

“We need someone that’s able to keep up with the changes that are happening in our community. And he has not proven to me to be able to do that anymore,” she said.

At the time, Perkins disputed his last-place ranking in an email to the news site: “It’s not about the number of tweets or press stories or even being at every meeting. I will go where I can do the most good, have the maximum impact for my constituents, and often that is in the community and on the streets, and not at City Hall,” he wrote.

A crowd of candidates are running to take Perkins’ place. With his entry, a total of 16 people would be vying for the District 9 seat.

Cleare, his former chief of staff, declined to speak about her former boss’ health, saying only that she is “always happy when people are in the race.”

“For whatever reasons — and I don’t know what they are — there has been a silence and there’s a gap. And the gap needs to be filled,” she said. “I’m running from the perspective that the community needs to be represented. And I have ideas and I certainly have plans and solutions.”

Keith Taylor, another candidate, said a well-known incumbent entering the race would change things in the packed field. But he believes the neighborhood should have options — especially with ranked choice voting in play for the first time this year.

“I think Harlem deserves choices,” he said. “The danger becomes when we don’t have enough.”

But beating the Perkins name will be tough for any of them, Asberry-Chresfield said, especially when so many older Harlemites remember Perkins the way he was for years: a hard-working, vibrant and omnipresent representative.

“My aunt, who’s 91 — I’ve spoken with her and I said, ‘Look, if his name does appear on the ballot, you do understand that he may not be able to represent you like he has in the past?’ And she says, ‘Well, he used to come to my birthday party … And that’s how I remember him,’” Asberry-Chresfield said. “And she would vote for him again. So, he could win.”