Please ensure Javascript is enabled for purposes of website accessibility Many Illinois students experienced ‘normal’ school without masks this week, others did not - THE CHICAGO HERALD Press "Enter" to skip to content

Home » Many Illinois students experienced ‘normal’ school without masks this week, others did not 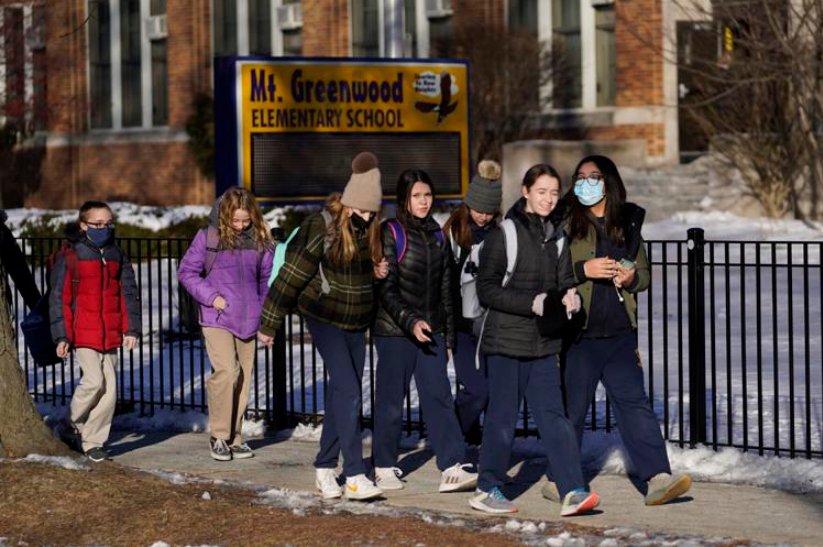 Many Illinois students experienced ‘normal’ school without masks this week, others did not

Many students across the state are choosing to go to school maskless despite the governor saying his mandate is still in place after a judge halted it. Other students are being punished for going maskless. It’s unclear if mask-optional districts will be punished.

Video posted on Twitter Friday shows students being kept out of one Illinois school while protesting outside the door with a sign that says “follow the law.”

Earlier in the week, another video posted on Twitter shows an unnamed student with others in a gymnasium expressing themselves to school officials that they deserve due process if they’re being kept from class for not wearing a mask.

“Instead of just assuming we’re guilty and masking every child in the school, you need to give us our day in court and explain to us why we need to quarantine around individuals,” the unnamed student said to applause from fellow students.

While some districts continue to isolate students from class for not wearing masks, other schools across the state went mask optional this last week. All this is prompted by Gov. J.B. Pritzker’s mask mandate being found null and void by Sangamon County Circuit Court Judge Raylene Grischow Feb. 4.

John Burkey, executive director of the Large Unit School District Association, said the judge’s temporary restraining order impacted most of their member districts. He said it’s about 50-50 on how schools reacted.

Pritzker is appealing Grischow’s ruling in the Fourth District Court of Appeals. A decision on the fate of the temporary restraining order could come early next week. The governor insists his mandate is still in effect. Wednesday, he said the statewide mask mandate for everywhere except schools, congregate settings and health facilities will be lifted Feb. 28

Despite that, In Tuscola, the school board made masks optional this past week. High School Principal Steve Fiscus said many of their nearly 300 students are happy to have a choice. Before this past week, some students have not experienced high school without a mask.

“And I think that’s what they’re most happy about is they now feel they have a chance to experience normal high school that previous groups before them experienced,” Fiscus told The Center Square.

Fiscus said a minimal percentage of students are still wearing a mask by choice.

Across the state in Fayette County, Vandalia Christian Academy has been mask optional all year. Principal Larry Urban said there’s been minimal disruptions for their 65 students. One constant has been the continued back-and-forth from the Illinois State Board of Education he called a “three-ring circus.”

“We’ve changed, what, four times as far as our status was concerned and every time it was because somebody filed a lawsuit against somebody else and then the state comes, fires back at you,” Urban told the Center Square.

Vandalia Christian Academy is one of seven nonpublic schools ISBE has listed as “Recommended for Nonrecognition.”

When reached for comment, ISBE didn’t say if it plans to continue to pursue non-recognition status against school districts that have mask optional policies.

“I think individual schools are back to kind of that local control and working through this issue with their own boards and their own superintendents and their districts’ parents,” Ardrey told The Center Square.

This article was originally posted on Many Illinois students experienced ‘normal’ school without masks this week, others did not