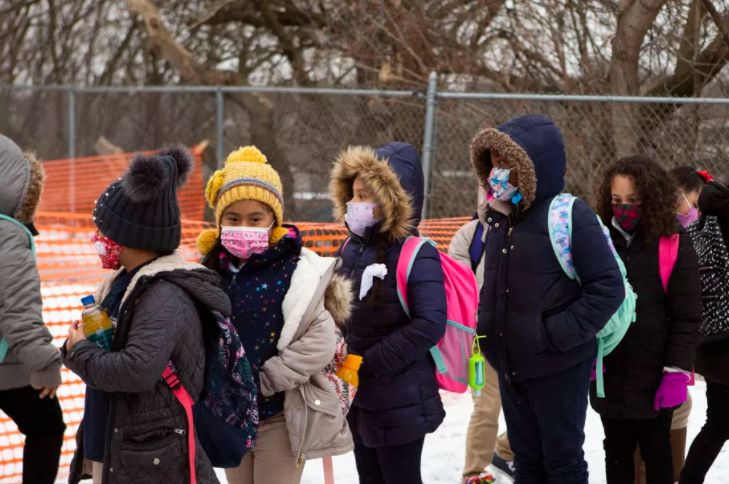 For weeks, Southfield held out as most other traditional public school districts made plans to open their doors to students who want to learn face-to-face.

But now the district has made plans to reopen its classrooms, forcing List — along with thousands of local teachers slated to return to in-person teaching for the first time in a year — to face one of the worst education quandaries of the pandemic.

On the one hand, educators’ morale has plummeted as it becomes clear that despite teachers’ efforts to adapt to virtual instruction, remote learning isn’t working for many students. At the same time, many teachers fear catching the coronavirus — which has now killed more than half a million Americans — in the classroom.

“It’s scary,” said List, one of thousands of local teachers slated to return to in-person teaching for the first time in a year. “It’s been very tough. It’s hard because it’s hard on the kids, because they’re not doing particularly well. And when we see our kids not doing well, it’s hard on us too.”

By and large, teachers are prepared to work face-to-face with their students — a key reason most of the state’s largest districts will soon reopen their doors, if they haven’t already. But the difficult decision to return to work adds to an already excruciating year that some say will take a long-term toll on the state’s already beleaguered education workforce.

Since January, COVID-19 cases have fallen sharply in Michigan, and concern is growing over the well-being of students who are still learning online. New guidelines from the Centers for Disease Control and Prevention say that if cases are low enough and schools take the right precautions, schools can reopen even before teachers are vaccinated.

Many Michigan teachers have gone along with recent reopening measures — a marked departure from the fall, when many educators were fiercely opposed to returning to the classroom and teachers in Detroit blocked school buses that were set to take students to the first day of summer school.

The vaccine is making a difference. Teachers were placed near the front of the line for coronavirus vaccines statewide. Gov. Gretchen Whitmer said Wednesday that two-thirds of the state’s teachers have received the vaccine or have plans to do so, well above the national average.

Mary Bouwense, president of the Grand Rapids teachers union, said the availability of the vaccine has “helped a lot” to shift teachers’ attitudes in favor of in-person instruction. The Grand Rapids district reopened its classrooms to students in a hybrid model in late January with support from the union.

Also helping to ease teachers’ minds about returning to in-person instruction: Research on schools that opened in the fall showed that the virus wouldn’t spread out of control if everyone in the building remained masked and socially distanced.

Teachers unions in some larger districts also forged agreements with district leaders that have made teachers more comfortable with a return to in-person instruction.

In Detroit, for instance, the district and its teachers union agreed to give teachers the ability to choose between in-person and virtual instruction this year. District officials hope that by not forcing the issue they will see alignment between the number of teachers and the number of students who volunteer to return to classrooms.

Terrence Martin, president of the Detroit Federation of Teachers, said it is up to the district to give teachers the confidence to teach face-to-face.

“The comfort level of in-person instruction is going to hinge on how transparent the district is going to be, how well the mitigation strategies are implemented, making sure there’s proper ventilation,” he said.

While many teachers in Michigan are willingly returning to the classroom, many others remain opposed.

Teacher retirements are up across the state, and education leaders worry that the state’s already leaky teacher pipeline is going to fracture further.

Teacher shortages have “only gotten worse as midcareer and closer-to-retirement teachers say, ‘You know what, I’m going to retire early or change careers because I don’t want to jeopardize my health and the health of my family,’” said David Crim, spokesman for the Michigan Education Association.

Available vaccines provide excellent protection against COVID-19, but they don’t guarantee that a vaccinated person won’t fall ill. In a nonscientific survey earlier this month by the Michigan Education Association, the state’s largest teachers union, 42% of educators said they remained “very concerned” about the safety of in-person learning.

Kalamazoo, one of the state’s largest districts with roughly 12,000 students and 800 teachers, will remain virtual through the end of the school year, in part because of opposition from teachers.

While case numbers and research on COVID-19 in schools suggested that a hybrid model would have worked for Kalamazoo, parents and teachers opposed that plan, Superintendent Rita Raichoudhuri said earlier this month. Parents preferred virtual instruction by a narrow margin, while teachers preferred it overwhelmingly.

Amanda Miller, president of the Kalamazoo Education Association, said a lack of vaccine availability for local teachers was to blame. She said the Kalamazoo Health Department prioritized only teachers who were already teaching in person.

A spokesman for the Kalamazoo Health Department confirmed that it was giving priority to teachers who were working in person, but did not respond to a request for further comment.

“Doing school this way is not very good,” Miller said. “There’s a lot of pressure [to reopen], and it’s understandable. It’s hard for everybody to be home.

“Teachers want to get back if we can do it safely and vaccinated.”