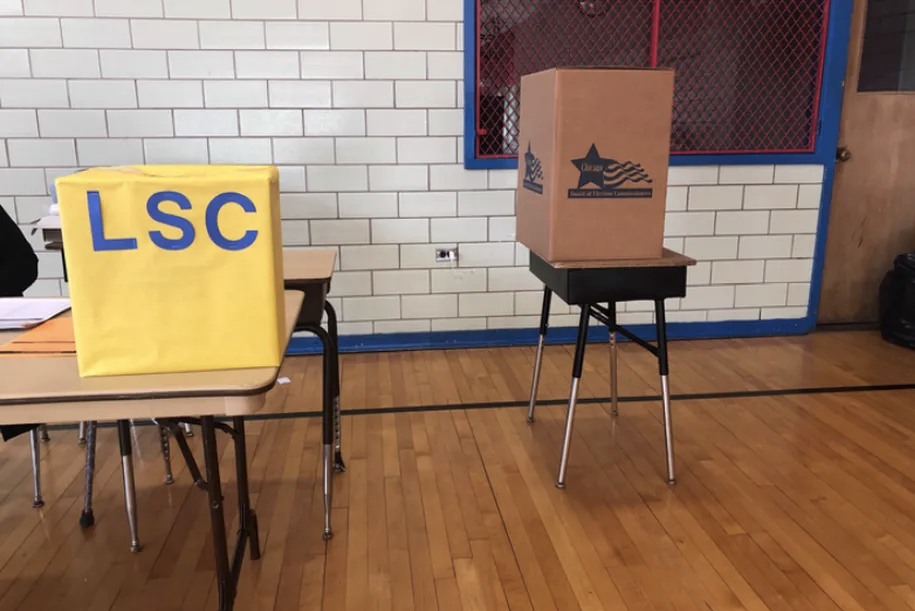 Across the district, 485 out of 509 schools have enough candidates to meet quorum requirements for the governing bodies of public schools known as Local School Councils, or LSCs. About 24 schools did not garner enough applicants to meet quorum, according to the district.

The district received 6,123 candidate applications out of the 6,239 total positions across 509 schools. The LSC elections will be held on April 20 for elementary schools and April 21 for high schools. A list of candidates running for a seat can be found here.

It’s an opportunity to “cure equity gaps” in Chicago Public Schools that have been “exasperated by the pandemic,” Erskine said. “If we don’t become part of the solution, what are our alternatives to make sure our children’s academic and safety needs are being met in these buildings?”

Local School Councils, an example of hyperlocal school governance, are elected every two years. A facet of Chicago school governance since the mid-1990s, the councils vote on the annual school budget, approve the school academic plan, and select and evaluate principals.

The councils are traditionally made up of the school’s principal, six parents, two community members, two teachers, one non-teaching staff, and one to three students. For the first time in the district’s history, elementary students in the sixth grade and higher can run and serve one-year terms on their school’s LSC.

“Chicago Public Schools is wholly committed to providing equal representation when it comes to the election of Local School Council members,” the district said in a statement. “CPS values these dedicated volunteer school leaders, comprised of parents, community members, students and staff, who work to support the academic progress, financial stability and integrity of our schools.”

In 2020, as a wave of student activism helped put school policing strategies in the spotlight nationally, Mayor Lori Lightfoot tasked Chicago’s high school councils with voting on whether to keep or remove police officers, a controversial transfer of authority that put some members — who do not receive pay — in a position of public scrutiny.

The district has struggled with tepid participation in the last decade. During the last election cycle in 2020, as the city was in the grips of the pandemic, more than 35,000 votes were cast for council candidates, a decrease of 43% from the 2018 election. After the last election, about 900 seats remained unfilled — a situation that prompted a wave of appointments.

A few days shy of the district’s deadline in March, only 722 candidate applications had been submitted for 6,239 total positions on councils across 509 schools. About 307 schools had zero candidates for open positions.

For these schools, the district’s Local School Council Relations Department will work with campuses to fill vacancies after July 1.

Chicago Academy High School, Rickover Naval Academy, Velma Thomas Early Childhood Center, and Emmett Till Math and Science Academy did not receive any applications and will be considered inactive for the two-year term. These schools will have a chance to seat members during the 2024 elections.

The district said it has participated in more than 100 events and publicized elections on the radio, television interviews, and social media to promote participation ahead of the deadline.

Erskine acknowledged participation has dwindled. The “devastating impact of the pandemic” on families and a lack of  transparency around meeting times and locations makes it difficult for parents and community members to get involved, she said.

“How do you have a virtual meeting but still rely on a pre-pandemic way of announcing a public meeting?” Erskine wondered.

Still, she remains hopeful that parents and community members will step up to the plate to best serve students in their communities.

“We shouldn’t be discouraged,” Erskine said. “We need parents and community members. We are facing sharp budget cuts in a lot of our schools and now is the time for folks to step up to fill these seats so we can have the type of education our students need.”