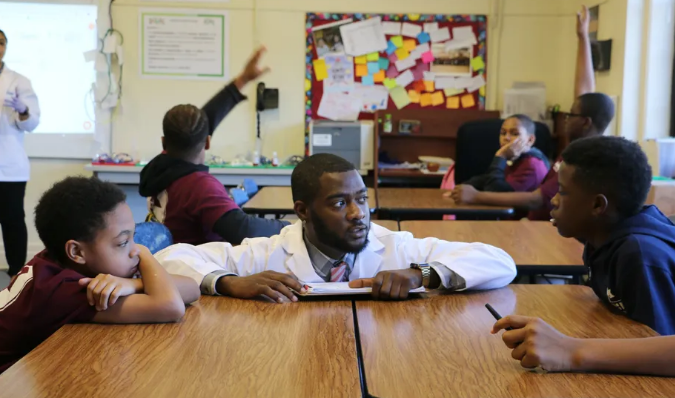 New Jersey’s Supreme Court heard oral arguments Monday in an appeal contending that the state failed to consider how the spread of Newark charter schools threatens the city’s traditional public schools and segregates students by race and ability.

The case stems from a former state education commissioner’s 2016 decision  to allow several charter schools to expand in Newark. The appeal challenges a lower court’s ruling, which upheld the decision.

The outcome could determine how many Newark students are able to attend charter schools, which currently enroll over a third of the city’s more than 56,000 public school students. The case also takes up weighty questions that could impact schools beyond Newark.

The second question is especially timely because a separate lawsuit making its way through the courts claims New Jersey has allowed school segregation to persist, despite a provision in the state constitution prohibiting it.

During Monday’s hearing, a state attorney suggested that Gov. Phil Murphy’s administration takes a limited view of its duty to root out segregation — at least when it comes to charter schools. If segregation is the result of parent choices and not schools excluding certain students, then the state’s role is limited, said Donna Arons, an assistant state attorney general.

“I’m not sure the state has the ability to prevent that,” she said, adding that the “charter school act itself is not designed to ensure racial balance in schools,” but rather to give students in underserved areas more options.

The court is expected to issue a ruling by the end of its current term on June 30.

Hespe’s decision was challenged in court by the Education Law Center, the advocacy group behind the landmark Abbott v. Burke case that resulted in increased funding for Newark and other high-poverty school districts. The group argued that the expansion would harm district students by diverting money to charter schools, further concentrate students with special needs in traditional schools, and intensify racial segregation across all schools.

The commissioner did not address “the severe impacts that the expansion will have on the delivery of a thorough and efficient education to NPS students,” said the 2017 court filing, referring to Newark Public Schools.

Today, more than a quarter of the district’s state and local funding goes to Newark charter schools, which enrolled just over 20,000 students this school year. Taken together, 11% of charter students have disabilities and just 1% are still learning English, compared with 17% of district students who have disabilities and 17% who are English language learners.

The charter schools’ attorneys counter that their growth has not hurt the district, which has made academic gains in recent years, and that charters do not exclude students with special needs. They argue that any racial imbalance in their schools reflects neighborhood segregation, and that children benefit from Newark charter schools, some of which outperform schools in wealthier communities on state tests.

“The charter school program in Newark has been a resounding success,” said the schools’ brief, calling the legal challenge an effort to “thwart the rights” of students.

In upholding the expansion, the appellate court said in its 2019 decision that the Education Law Center had not shown how the charters’ growth would prevent the district from providing students a “thorough and efficient” education. It rejected the group’s argument that the state must apply extra scrutiny to proposed charter expansions in districts that were part of the earlier Abbott case.

The court also said the test of whether charter schools add to segregation is if they refuse to enroll certain groups of students. “That the demographics of the individual charter schools do not precisely reflect the overall demographics for the district is not sufficient to demonstrate a segregative effect,” the court wrote.

The Education Law Center appealed the decision to the state Supreme Court, which last year agreed to hear the case.

Meanwhile, as the lawsuit has wound its way through the courts, the outside world has changed.

Newark’s education landscape also looks very different. In 2018, the local school board regained authority over the district after more than 20 years of state control, during which the district shrank and charter schools proliferated. The board’s chosen superintendent, Roger León, has made a policy U-turn: He is intent on growing the district and slowing the spread of charter schools.

In contrast to 2016, when Newark’s state-appointed superintendent did not object to the charter expansion, León and the new school board have joined the legal challenge against it.

On Monday, the board’s general counsel, Brenda Liss, argued that the state has a duty to address segregation in charter schools “in a proactive way.”

Several justices questioned how that would be possible. Justice Anne Patterson asked whether KIPP’s Newark schools would have to change their student population, which is about 88% Black.

Liss said the district is not asking for any students to be removed from their schools, but that charter schools’ composition could be changed over time by adjusting who is admitted.

The Education Law Center’s executive director, David Sciarra, said the state could also stop charter schools that haven’t reached their enrollment caps from adding more students. And he argued that the state must study how the spread of charter schools in former Abbott districts would affect traditional schools’ funding and the overall level of segregation — even if districts don’t raise those issues themselves.

Paul Josephson, an attorney representing the New Jersey Public Charter Schools Association, said it’s unrealistic to expect each school to enroll a mix of students that mirrors the demographic breakdown of the entire district. Schools — both traditional and charter — often reflect the racial makeup of their neighborhoods because families tend to send their children to the nearest option, he said.

“The history in Newark has been many charter schools locating in neighborhoods that are predominantly Black,” he told the court, “because that’s where the perceived need is the greatest.”

Justice Barry Albin said that history has proven that “diversity is incredibly important” for students’ development. Knowing that, he asked during the hearing, doesn’t the state have an obligation to reduce the segregation in some Newark charter schools?

But Arons, the state attorney, suggested that parental choice outweighs the imperative of integration.

“These students are succeeding fabulously,” she said, “and their parents want them to attend those schools.”