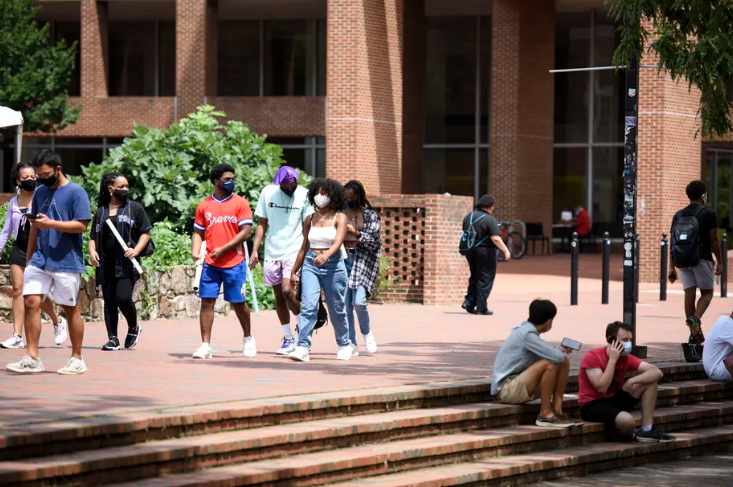 A straight-A student and star offensive lineman on his Newark football team, he’d been scouted by college coaches and invited to visit Princeton. But the pandemic disrupted his season and drove off recruiters. Now, instead of planning to attend college right after graduation, he’s eyeing a post-graduate football program that he hopes will lead to better college offers down the line.

The pandemic “changed a lot of things,” he said. “It’s made it a lot harder.”

For students across the country, choosing and transitioning to college has rarely been this difficult. The coronavirus canceled campus visits and in-person college fairs, making it harder to find the right school. Remote learning sank some students’ grades and interrupted arts and athletics, limiting their college options. And the pandemic strained family finances, leading some students to downsize their college ambitions or put them on hold indefinitely.

College enrollment nationwide declined by an unprecedented 4 percentage points last fall. This year, fewer students than usual have applied for college financial aid, which could signal a continuing downturn in college-going.

Like so much else during the pandemic, the postsecondary pain has not been spread evenly. High-poverty high schools saw a roughly 5 percentage point decrease in college enrollment last fall — more than two times the rate of decline at low-poverty schools, according to a report by the National Student Clearinghouse Research Center. The enrollment slump was also disproportionately large at schools that mainly educate students of color.

The same pattern has played out in New Jersey. Just over 67% of high school graduates statewide enrolled in college last fall, a 5 percentage point drop from the previous year, according to newly released state data. But in Newark, where the majority of students are Black and Hispanic and come from low-income families, just 43% of district graduates headed to college last fall — 9 points lower than the year before.

The decline is especially devastating for Newark, where the college-going rate is far lower than the statewide average but had been climbing steadily before the pandemic. And while some of the students who skipped college last fall might eventually find their way to campus, they risk losing the academic momentum that gives those who start college right after high school a greater chance of earning degrees.

The worrisome trends are continuing. As of April 9, the number of 12th graders in Newark’s district schools who completed college financial aid forms was down 23% compared with last year, according to federal data. By contrast, the statewide number was down just 4%.

Now, school staffers and nonprofit agencies are scrambling to steer Newark students back toward college. The mission might get easier with some students returning to classrooms, yet the work ahead remains daunting.

“It’s scaring us, to be quite honest,” said Nefertari Nkenge, national program director at Pathways to College, a nonprofit that helps prepare students in Newark and other cities for higher education. “We’re nervous because we know the numbers in Newark, and because many of our students are struggling.”

The FAFSA, or Free Application for Federal Student Aid, is often a bellwether of college enrollment.

The Newark school board said in August that students would have to file the FAFSA in order to graduate this year, but it quickly dropped the requirement. Since then, very few students have applied for financial aid at some schools.

Some students say it’s been harder to fill out the complicated form, which requires entering family tax and financial information, without in-person assistance. Rasheed Smith, a senior at University High School, said the pandemic stopped him from visiting a college-prep center for high schoolers.

“We would get different scholarship information and they would help us fill out the FAFSA,” he said. Without that, “it has been pretty difficult.”

The Newark school system held a virtual college fair and online FAFSA workshops for families, and school guidance counselors have worked with students over video, phone, and email, a spokesperson said. Local universities and agencies have also offered free FAFSA workshops, she added.

Gbagbe-Sowah, the football player and A student, said the college advisers at University High School are constantly reminding students to apply for scholarships and financial aid.

“I get at least three or four notifications every few hours,” he said. “They’ve been really pushing to help us out.”

At Newark Collegiate Academy, a charter high school operated by KIPP New Jersey, staffers met privately with families over video during a virtual “FAFSA Night.” And because counselors could no longer host working lunches in their offices, they had food delivered to students’ homes while they talked college over Zoom.

“I think we’re realizing how important the relationship piece is,” said Diane Adams-White, director of KIPP’s college-access program in Newark. She said about 77% of seniors at the KIPP high school have completed the FAFSA so far this year.

As Newark students who opted for in-person learning return this month, high schools might have more luck helping students fill out college forms.

At Barringer High School, where FAFSA completion plummeted this year, the school has seen a spike in submitted applications now that students are back in the building, staffers said. (One reason for the school’s low FAFSA numbers is that many students are undocumented immigrants, making them ineligible for federal aid.)

In New Jersey, incoming college students have until Sept. 15 to apply for financial aid.

At the local level, school districts can partner with colleges to make sure accepted students complete the necessary steps to enroll, she added. And schools will need to ramp up assistance for students who haven’t yet applied to college or sought financial aid; that could include hiring counselors to work with students over the summer.

“Adding months of time of additional support services is going to be the No. 1 strategy,” she said.

“Your life trajectory is dependent upon this key decision of whether or not you’re going to college,” she tells students. “Your ancestors are awaiting your greatness.”