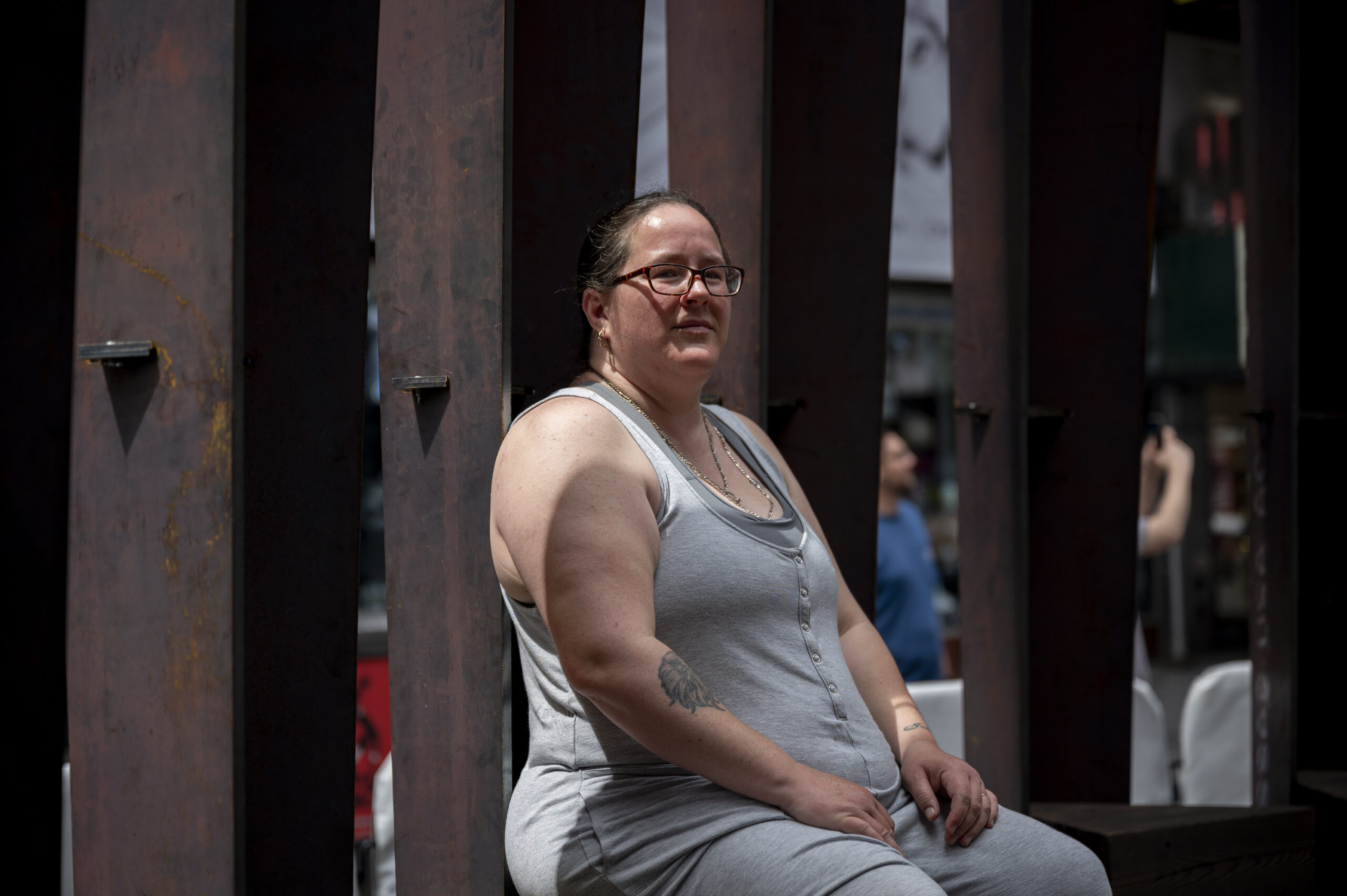 To teach her 8- and 11-year-old kids about their Lakota heritage, Brooklyn mom Cheyenne has to rely on homeschooling and sporadic community events.

She teaches them traditional dances for pow wows and about land and prayer, and helps them  experience Native culture by attending events hosted by the American Indian Community House, a nonprofit serving New York’s Native American populace.

That includes events like the Murdered and Missing Indigenous Women Day vigil, held in Washington Square Park on May 5.

“One of the people that’s on that list, for the murdered, is my kids’ cousin,” Cheyenne, who asked that her last name not be published, told THE CITY. “And then also the history of the Native people, like my kids are descendants of Sitting Bull.”

“There’s a loss of our languages. More of the indigenous people are more English speaking because of the boarding schools,” she said. Specifically for the Lakota language, “There’s not enough speakers that are fluent.”

To help fill this linguistic gap, The New York Community Trust, the state’s oldest public charity, awarded nonprofit The Language Conservancy a $44,000 grant in late April to teach the Lakota language, via the Marcia Ashman Fund for Children. (The New York Community Trust is a funder of THE CITY, which we disclose per our ethics policy, but donors have no influence over our editorial decisions.)

Through the NYCT grant, six young Native Americans from the city would intern with the Language Conservancy for two months in its Indiana offices. The funding also goes toward bringing Native American language instructors to New York City to teach Lakota locally on weekends.

But who should teach the language and how is a heated debate topic at the Standing Rock Indian Reservation spanning North and South Dakota, a headquarters for the nation’s shrinking Lakota-speaking populations.

On May 3, the Tribal Council of the Standing Rock Sioux Tribe passed a resolution specifically banning The Language Conservancy and The Lakota Language Consortium — two partnering nonprofits that strive to preserve Native languages — from operating on its reservation, citing concerns with a lack of cultural sensitivity in the groups’ teaching style.

The 2020 American Community Survey conducted by the U.S. Census Bureau states that approximately 15,680 people spoke one of the “Dakota languages” at home, with Lakota included in that category. With over 5,000 speakers, Lakota falls in the top 5% of the surviving native languages, according to The Language Conservancy.

Despite the condemnation from the Sioux Tribe, NYCT said they were happy to be working with the group.

“We believe the Language Conservancy’s program to teach Native American New Yorkers the Lakota language was an opportunity to both fulfill the donor’s original intention and to meet a need here in the city,” Marty Lipp, communications director for The New York Community Trust, told THE CITY.

Tribal Council of the Standing Rock Sioux Tribe did not respond to multiple requests for comment from THE CITY but has previously stated that they object to the teaching style and use of non-native speakers as instructors.

Language Conservancy Executive Director Wilhelm Meya, who is also on the board of the Lakota Language Consortium, noted previous language weekend events in New York have had a high turn-out, including 50 attendees at an October event.

“I would say that the language weekend events were so successful and inspiring for people in New York, that they requested more teaching events, and so we worked with one of the local Lakota teachers to provide an ongoing, every weekend type class,” Meya told THE CITY. “A portion of that original class continue[s] to meet every weekend for months to continue their Lakota language learning.”

When Cheyenne heard about the grant during her Lakota language class search, she immediately called The Language Conservancy to sign her children up for classes. But she was told they were too young to participate in the weekend program. Despite the grant being youth-specific, the minimum age requirement for the classes is 16 years old.

“This is so that there is a focused learning environment as this is college-level curriculum and pacing,” Conservancy spokesperson Tara Tadlock wrote in an emailed statement.

“I’m livid,” Cheyenne said. “Not every Lakota person lives on [a] reservation and has that opportunity.”

“I think that there should be a grant for kids that are not on the reservation to have that opportunity to do these classes and get books and materials in order to learn, read, write and speak,” she added.

The Tribal Council of the Standing Rock Sioux Tribe take issue with who is teaching the Lakota language and the methods being used.

The Language Conservancy’s curriculum consists of a method Meya said “is proven to be the most effective for teaching languages because it mimics the natural language acquisition style of learning and allows students to retain more language information than other methods.”

These courses are taught by both native speakers and people who previously completed the program and speak Lakota as a second language, according to the Conservancy. Not all have Native heritage.

The Tribal Council’s resolution earlier this month against TLC states their disapproval of “unethical linguist-driven efforts to attack and intimidate our learners into SLO-only [student learning objectives] approaches and materials, while continuously misleading our elders to believe that first-language speakers’ grossly under-compensated and unattributed expertise will freely benefit our language learners.”

Essentially, the Council believes that The Language Conservancy’s teachers and teaching style do not have the cultural sensitivity necessary to effectively pass on Native languages.

Instead, it accuses the nonprofit of selling these services “without any provision to protect or maintain sacred stories or knowledge as an inalienable, non-transferable collective Oceti Sakowin birthright for children and grandchildren.”

The Oceti Sakowin, meaning “Seven Council Fires,” is also known as the Sioux Nation, and is a confederacy of nations that speak Lakota, Dakota and/or Nakota, according to the National Museum of the American Indian.

Phyllis Young, a Standing Rock organizer for the Lakota People’s Law Project, however, believes that preventing non-Natives from teaching would contradict traditional tribal law, which calls for treating everyone alike.

She pointed to how in the 1980s when the Native American community experienced high suicide rates, non-Natives came to help. These outsiders slept in their cars but were welcomed by the elders into their homes.

“They fed them and they said, you can stay in our house,” Young said to THE CITY. “So we were shocked that the [Council’s] Health Education and Welfare committee, the three women on there, voted, approve[d] this resolution.”

Young, who has legal experience having worked on legislation such as the United Nations Declaration on the Rights of Indigenous Peoples, explained that the resolution not only removes non-Native teachers, but hurts Native teachers as well.

“When you make this action tomorrow, it will not have merit because you did not address the [Lakota Language Consortium] board who are not those white teachers,” she told the Council before the vote. “You don’t have the authority to go back to make a motion to override any of your boards that you created here, or that are created on their own accord. You have to exercise equal or due process.”

“I think it’s unfortunate that basically a single tribal member who instigated this resolution was able to mischaracterize and misrepresent the work we do,” Meya said to THE CITY.

He did not comment on the specifics of this mischaracterization or name the tribal member, but rather referred back to the nonprofit’s formal statement in response to the resolution.

On Twitter, Ray Taken Alive self-identified as the person Meya referred to.

He also believes that the NYCT grant should go directly to the tribe instead.

“Why not just reach out to the tribe? Give the tribe the grant. @NYCommTrust and if you need materials- We have a lot for free we could share. This article mischaracterizes what the issue was about,” he continued.

Meya said he wants to cater to learners in New York who want The Language Conservancy’s classes.

“In working with the Native American youth community in New York, specifically the learners, they expressed a great deal of interest in continuing to have these learning opportunities such as language weekends, and so we are following up on that interest and those requests,” he said.

Young also believes that as long as these classes are in demand, they should be provided.

“I think it’s incredible and I think that America is ready for us and if New York wants us then so be it. We are the evidence of the Western hemisphere and wherever we are on Turtle Island [North America] is a blessing,” she said. “Bring them, and if I have to come there myself to welcome them, I will.”

While the Language Conservatory will offer these weekend classes despite the controversy shrouding their grant money, Cheyenne still does not have a Lakota language teacher for her children.

Unable to teach them herself, Cheyenne plans to take her fight for these children’s classes to colleges and universities, starting with New York University. Its Center for Latin American and Caribbean Studies previously partnered with The Language Conservancy for its language weekend in February 2019.

“It’s been hard because nobody speaks it, but you know, in order for the language to move on, I have to push for it and I’ll go to whatever college that I have to to get that done,” she said.

This article was originally posted on Nonprofit Receives Grant to Teach Lakota Language in NYC, Despite Standing Rock Ban