Please ensure Javascript is enabled for purposes of website accessibility NYC high school buildings will reopen in March. Sports are set to resume in April. - THE CHICAGO HERALD Press "Enter" to skip to content

Home » NYC high school buildings will reopen in March. Sports are set to resume in April. 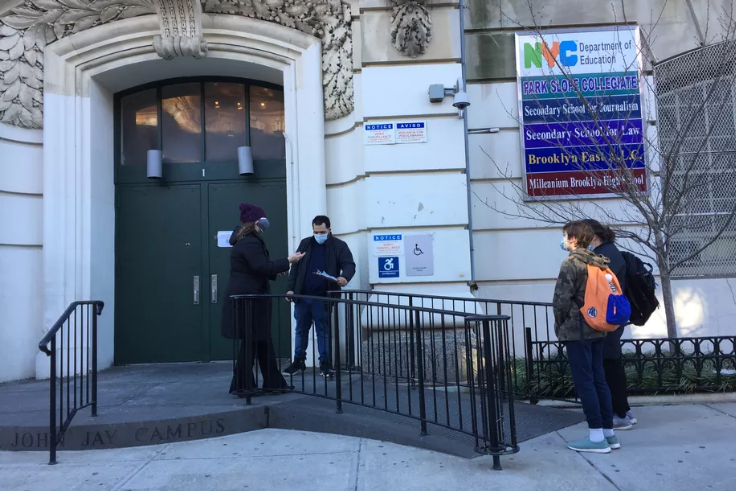 NYC high school buildings will reopen in March. Sports are set to resume in April.

New York City high school students will begin returning to their campuses on March 22, and athletes will rejoin their teams in April for a sports season that has been extended through the summer, the city’s education department announced Monday.

The move means all grade levels will soon be open for in-person learning for the first time since November’s citywide campus shutdown. Elementary schools and those serving students with complex disabilities reopened in December, and middle schools opened late last month.

High school staff working in person will return on March 18.

The March 22 high school reopening date was first reported by Chalkbeat last week, after a student stumbled upon a draft letter to families that was inadvertently posted on an education department website.

Many students and families have been urging the city to reopen high school campuses, and the incoming schools Chancellor Meisha Porter said it would be a priority, though the overwhelming majority of high school students will continue learning remotely full-time.

About 55,000 students who previously opted for in-person learning this fall will be eligible to return to classrooms. That’s less than 20% of all high school students. Yet, officials have not offered a systematic strategy to improve remote instruction and also have not announced any new opportunities for fully remote students to switch to in-person learning.

“The variants are a big question for us,” Mayor Bill de Blasio said in response to a question about whether more students would be allowed to switch to in-person learning. “We’re not going to do it until we’re sure that we are safe.”

Roughly half of the city’s 488 high schools will be able to offer five days a week of in-person learning for all or most of their students, education department officials said. Still, because of the complicated nature of scheduling classes while trying to limit the exposure of students to one another, many high schoolers will be learning virtually from teachers who are not in the room with them even when they’re in the building.

The city’s teachers union supported the decision to reopen and noted that expanding testing to include high schools had been a roadblock. “The mayor had to demonstrate that the city could conduct randomized weekly testing of 20% of staff and students,” union officials wrote in a letter to members on Monday. Random testing has lead to many temporary classroom and school-level closures this year, though union officials said “this level of testing is what has kept our school communities safe.”

Still, some observers said the city’s reopening efforts are still too limited.

“Thirty percent open is not a victory,” tweeted Shael Polakow-Suransky, the president of Bank Street College of Education and a former chief academic officer for the education department. “With the passage of the rescue plan NYC finally has the resources to open fully and safely within the next six weeks for all students.”

The Public School Athletic League will resume early next month for practices and conditioning, with competition beginning in May. The season, which typically ends with the school year, will run through the summer. Athletes will be required to wear masks, no spectators will be allowed, and participants will undergo weekly coronavirus testing, officials said. Students who opted for fully remote learning will be allowed to participate.

The return to campuses and sports will likely come as a relief to some students. Some teens had felt forgotten as their younger counterparts returned to classrooms, and reported feeling lonely, anxious and unmotivated. Many have been struggling with time management or other responsibilities, as coursework piled up, some of it still incomplete from when buildings abruptly shuttered last spring. Some students have also lamented they are lacking the social connection — and motivation to attend school — that often comes with school sports.

“I really miss the practices,” Javin Trail, a senior at Fannie Lou Hamer Freedom High School in the Bronx, previously told Chalkbeat. “It’s just a time we all get to hang out with each other.”

He formed deep friendships with his teammates from his basketball team, which made it to the quarterfinals last year.

“By the end of the season, we really built that bond of brotherhood. We really felt for each other,” he said. “We really love each other.”

The health and safety procedures in high schools will mirror those in place across the system, including required weekly COVID-19 testing of 20% of students and staff. Officials also noted in a draft letter that families who are traveling during the week of spring break, which begins March 29, must quarantine for 10 days if they go somewhere on the state’s travel advisory list or test out of quarantine.

This article was originally posted on NYC high school buildings will reopen in March. Sports are set to resume in April.