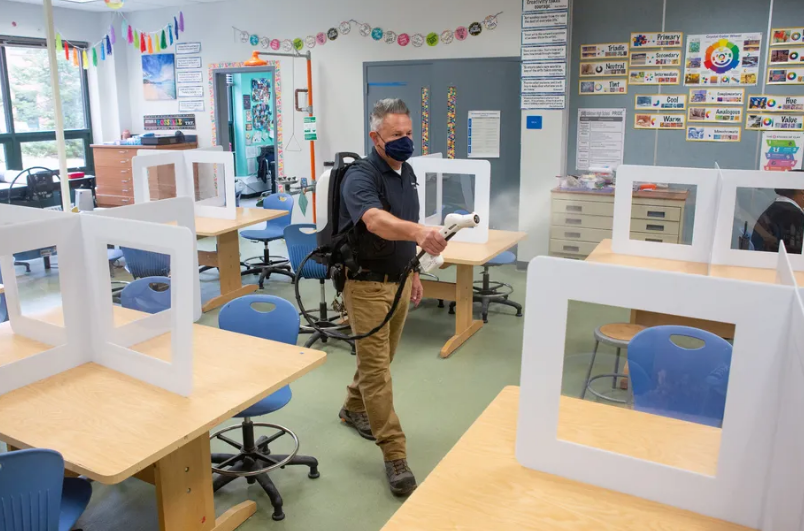 How are New York City schools spending the first of its three federal coronavirus relief packages?

It’s all covering the paychecks for custodial workers this school year, according to records Chalkbeat obtained through a Freedom of Information Law request.

The nonprofit New York City School Support Service employs about 7,500 custodial workers at city schools overseeing “cleaning and disinfection, basic maintenance and repair, and building opening and closing duties,” according to city officials and the documents. Under the city’s application, approved in January, the money must be used for the organization’s budget this fiscal year, which ends on June 30.

This federal money would cover nearly all of the School Support Service’s estimated $644 million budget, city officials confirmed. The nonprofit spent $623 million during the previous fiscal year, according to the city’s Independent Budget Office.

The March 2020 federal relief package passed under the CARES Act was the first — and smallest — cash infusion for city schools. It allowed school districts to use these funds in various ways, including for personal protective equipment or to buy computers for students who were learning at home. In the two subsequent federal relief packages — in which nearly $7 billion has been earmarked for New York City schools — the money can be spent on similar expenses, but a portion of the final package must also be used to combat learning loss. This time around, the state is requiring public feedback sessions as well as public-facing plans for spending the most recent stimulus allocations.

Spending money from the first relief package on wages for existing workers is “kind of a gray area,” said Julia Martin, legislative director for Brustein and Manasevit, which has provided education-related legal advice to states. But she believes the district could successfully say that supporting these workers was essential for public health protections when schools reopened and to maintain operations during the pandemic.

“You can argue that disease spread mitigation and public health is more important than ever, [and] there were a lot of concerns early on in the pandemic about staff layoffs,” Martin said.

The March 2020 federal relief package sent about $720 million to New York State to then pass down to New York City schools (including a portion providing services for private school students). But in last year’s state budget, there was a twist that resulted in school districts getting the short end of the stick.

New York State legislators, led by Gov. Andrew Cuomo, cut the state’s own financial contribution to districts by the exact amount they were set to receive from the federal government. The move canceled out the federal help as the state faced its own budget crisis.

Because of that, city officials have long argued that this first federal package didn’t cover any new costs that the pandemic brought on.

“Due to the State’s budget cuts, New York City did not see a dollar in additional CARES Act money so these funds were not used to make any new investments,” Katie O’Hanlon, a spokesperson for the education department, wrote in a statement. “We found eligible expenses for this money to fill the budget gap created by the State cut, and in our case, the eligible expenses supported custodial workers who helped keep school communities safe during these challenging times.”

As schools re-opened this year, custodial workers were expected to take on new tasks on top of their normal cleaning duties, including using electrostatic sprayers to sanitize classrooms every day, said Robert Troeller, president of the union that represents custodial engineers. City officials said they spent an additional $50 million in cleaning supplies and personal protective equipment, plus another $22 million for ventilation repairs, air purifiers, and partitions in schools.

Troeller’s union raised concerns last summer that the city was expecting workers to do more without boosting their budgets to hire more help or pay overtime. Those concerns did not bear out, mainly because “just a fraction” of students have been inside of school buildings, Troeller said. Nearly 700,000 city students — or about 70% — are learning from home full time, with about 51,000 of them set to return later this month.

“Instead of 40 bags of garbage, there were five. That gives you more time to do something else,” Troeller said. “If there were only 100 kids in schools that might support 800 kids, the bathrooms are not gonna be so dirty — it’s not gonna take so much time to clean those bathrooms.”

To help cover the extra work this year, Oneill was able to promote two of her part-time cleaners to full-time status, she said. Even her handyman paused some of his daily duties to help sanitize, she added. (When buildings were closed in November due to rising COVID-19 cases, her team caught up on maintenance projects, such as painting.)

However, if most students return to buildings next year, Troeller warned that keeping similar protocols in place could be “impossible” to carry out without additional money to hire more help, he said.

It’s possible that cleaning and sanitizing protocols could be scrutinized or even pared down next school year, given that the U.S. Centers for Disease Control and Prevention have said that contracting the coronavirus from surfaces is not the main way people are becoming infected. Some have described the nightly deep cleaning of city subways as “hygiene theater,” but experts have told NY1 that such cleaning may be necessary in such a high-volume, public place, as well as for instilling public confidence and comfort.

City officials did not answer questions about what safety protocols would look like next school year.

In contrast to last year, the city is flush with new state money for schools, on top of the billions in federal coronavirus relief aid from the packages approved by Congress in December 2020 and last month.

The final state budget requires districts to solicit public feedback on how to spend the federal stimulus dollars from the March package under the American Rescue Plan Act. Districts must post online plans for the money by July 1, and if officials want to use the relief dollars to create permanent programs, they must show how local dollars will be used to maintain those investments.

The public should not have to file an open records request to learn how their districts are spending this money, said Professor Marguerite Roza, director of the Edunomics Lab at Georgetown University. Through her analysis of how districts are spending relief dollars, she’s found many have been opaque — and she suspects some of that has to do with being overwhelmed.

“Districts are having a hard time strategically planning for these dollars and accounting for them in a public way,” Roza said.