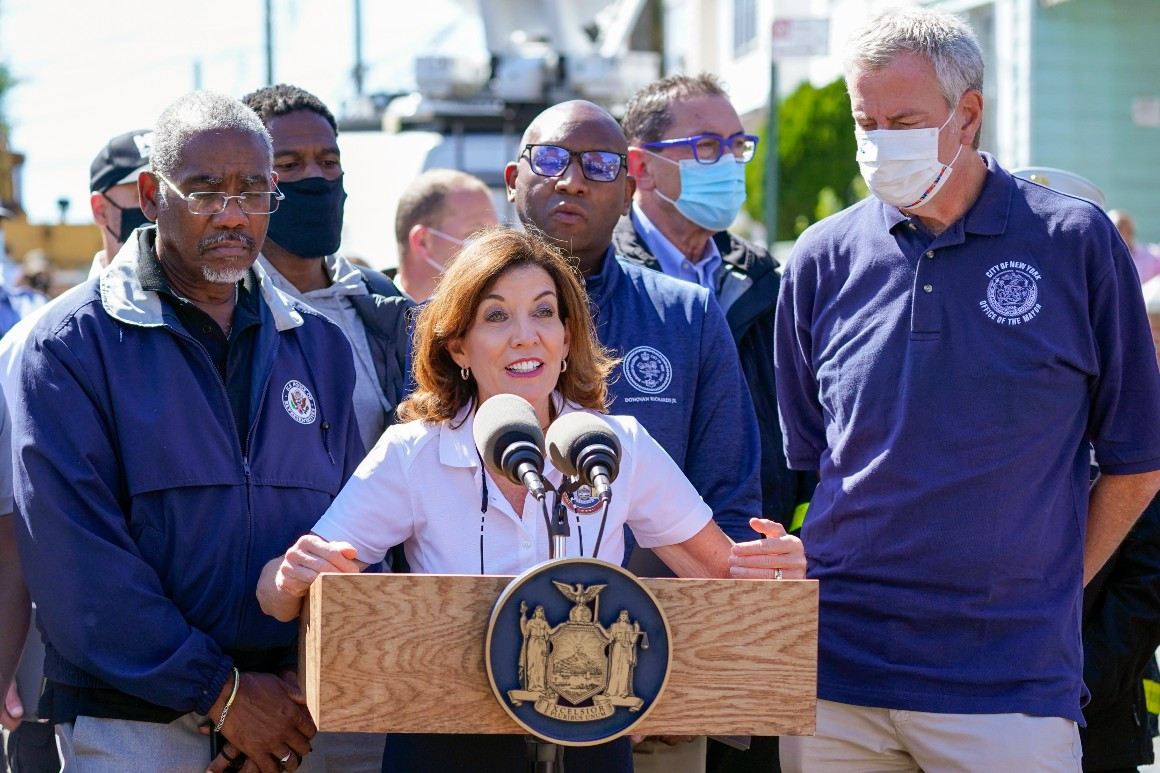 Poll has both positive, negative signs for Hochul’s reelection ambitions

A new Siena College poll that came out Tuesday shows mostly good news for New York Gov. Kathy Hochul. However, there are some signs that the state’s new governor may be in for a tough year as she seeks a full term in the executive mansion.

Hochul, who took over after Andrew Cuomo resigned in late August, has a 42% favorability rating, compared to 26% unfavorable, according to the poll of 801 registered New York voters administered by the upstate college’s Research Institute.

And while the Democratic primary won’t be held until June, the poll shows Hochul with double-digit leads over other potential primary challengers.

In a five-way field, Hochul holds a 31%-17% lead over Cuomo, with state Attorney General Letitia James polling at 14%. Take Cuomo out of the mix, and Hochul actually increases her lead over her potential rival, 39%-20%, in a four-way race with New York City Mayor Bill de Blasio and New York City Public Advocate Jumaane Williams.

Siena College pollster Steven Greenberg said Hochul enjoyed big leads with downstate suburban and upstate Democrats on her potential challengers, all of whom are from New York City.

“Predicting June’s Democratic gubernatorial ballot 36 weeks from primary day, four months before a state party convention with only Hochul declared is not for the faint hearted,” Greenberg said.

The Siena pollster added that many of the potential candidates are relative unknowns to most voters.

And that may be to the benefit of someone like James, who currently has a favorability rating of 39%-19%, according to the poll.

Williams meanwhile has a 25%-13% rating. Both de Blasio and Cuomo find themselves heavily underwater with voters. The Siena poll found the mayor has a 25%-56% unfavorable rating, while the disgraced ex-governor polls at 33%-60%.

In speaking with reporters on Tuesday morning, de Blasio didn’t seem fazed by the poll numbers.

“I have a long, rich history of being an underdog,” the mayor said. “I have seen polls like that, literally every time I’ve run for office. If I worry about stuff like that, I wouldn’t be sitting in this chair right now.”

While Hochul appears to be in a good position for the November 2022 race, the poll indicates that voters are not as strong for her on specific issues.

On cleaning up corruption – one of the key messages she’s tried to hammer home in her public comments – just 7% said she’s doing excellent and 20% said she was doing a good job. On the other hand, 26% rated her poorly, with another 22% grading her as fair.

On strengthening the economy, again, just 7% graded her as doing an excellent job, with 24% saying her work was good. But 27% rated her performance as fair, and 24% considered her work a poor job.

Those figures also resembled voter feelings on issues important to them. Hochul came in at 8% excellent, 25% good, 26% fair and 24% poor. And judging her overall, 9% said she was excellent, and 34% considered she was doing a good job. But 26% rated her performance as fair and 19% as poor.

“Voters – particularly Republicans and independents – are not cutting the new governor much slack in judging her early performance. Independents are nearly two-to-one negative, and Republicans rate her even more negatively than that,” Greenberg said.

Should Hochul win next June’s primary, 45% of voters said they would pick her in the ensuing general election, while 37% would want someone else.

Republican candidates are still not generating a lot of buzz among voters. Of the three announced candidates, Andrew Giuliani has both the highest favorable (27%) and unfavorable (49%) ratings.

This article was originally posted on Poll has both positive, negative signs for Hochul’s reelection ambitions