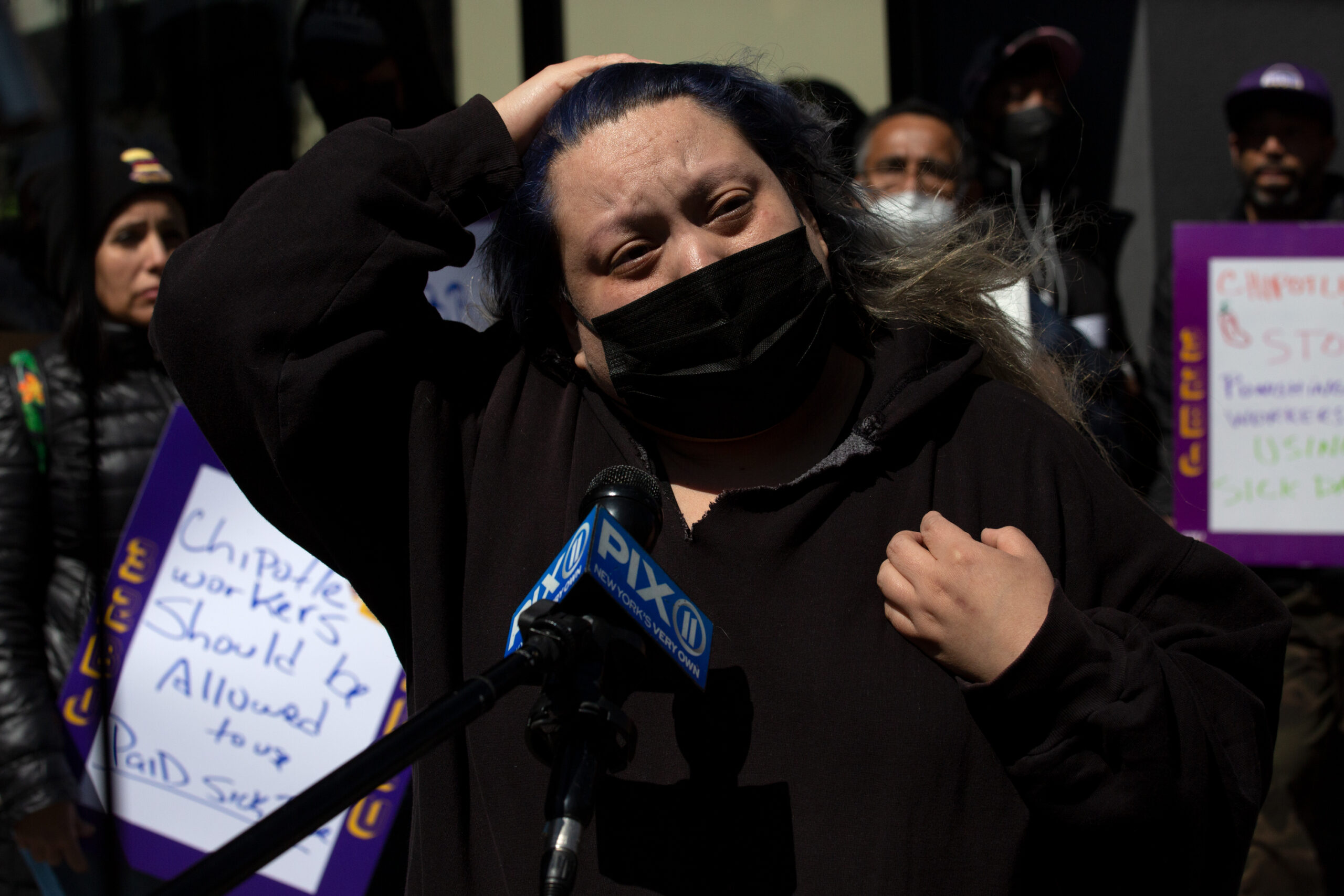 Brenda Garcia led union efforts at Chipotle, participating in rallies, publicly speaking out against the fast casual chain flouting city labor regulations and answering questions from fellow “crew members” about why they should unionize.

Last week Garcia, 31, was told she was fired from her Chipotle outpost in Flushing, Queens — and a complaint filed with the National Labor Relations Board on Thursday alleges it was in retaliation for her union work.

Service Employees International Union Local 32BJ, which has helped Chipotle workers’ so-far unrealized efforts to unionize, filed the complaint against Chipotle Mexican Grill on behalf of Garcia. It alleged in the complaint that within the past six months, Chipotle had terminated her “in response to her protected, concerted Union activity” — an act the union asserts improperly interfered in worker organizing.

In an interview with THE CITY, Garcia said her manager told her she was fired last week after taking time off for a medical issue, which she said had been approved by two of her managers.

Garcia claims that on Monday, April 18, she was walking to a pharmacy on one of three sick days she said she’d been granted, when her manager recognized her, followed her, and, she said, fired her on the spot.

Garcia said when she tried to explain to the manager that it was her day off, the manager called her “a liar.”

“Where I worked at, nobody wants to speak up. They usually just leave the job,” Garcia said, adding that she is filing the complaint against Chipotle “because they’re abusing their power. I think they have to stop.”

​​In response to the complaint, Chipotle chief corporate affairs officer Laurie Schalow said in a statement: “Our records and internal conversations with management at this restaurant show that Ms. Garcia has not been terminated and is still an active employee. We have reached out to her twice and are awaiting a response.”

Garcia maintains that she was “followed into a pharmacy and bullied, then told I was fired. Ever since that day, I have not been offered any shifts,” she said in a statement through 32BJ. “They contacted me once, but not to give me any shifts or to give me my job back.”

“I’m ready to get my job back and to keep fighting for  the shifts and a schedule that I need to survive and to support my son,” the statement read. “I want changes. I WILL accept being rehired, and I want a stable full-time job with proper training and I’ll keep fighting for it.”

During a Thursday afternoon rally at the Roosevelt Avenue Chipotle, Garcia walked into the restaurant and handed a printed copy of the complaint to a manager.

32BJ spokesperson Autumn Weintraub said in a separate statement that the union “will consider it if and when Chipotle extends a formal offer of reinstatement to Brenda. We are not aware of such an offer made directly to her at this point.”

Chipotle workers across New York City have been organizing for the several years, staging walk-outs in Washington Heights to Queens Center Mall citing unfair working conditions including harassment, high turnover and a flouting of the city’s Fair Workweek Law, which mandates that management at fast food restaurants hand over employee’s schedules at least two weeks in advance.

Last April, the city filed an administrative case against Chipotle alleging “systematic failures to comply” with the scheduling law, asserting that the company had violated the law nearly 600,000 times between 2017 and 2019 at nearly 90 locations across the five boroughs. The city Department of Consumer and Worker Protection calculated the employees were due nearly $150 million — ”approximately $23,061.00 relief owed per affected employee.” The case is still ongoing at the city’s trials office.

Chipotle workers are not unionized, but have been working closely with 32BJ-SEIU — which has ramped up its efforts at the fast casual chain because the outposts are company-owned, as opposed to heavily franchised chains such as McDonald’s.

In 2019, the NLRB filed an unfair labor practice complaint against Chipotle, alleging the company intimidated and fired a worker for complaining about problems in their workplace and discussing union activities.

The NLRB general counsel at the time, Donald Trump appointee Peter Robb, claimed in that case that management “threatened to fire employees if they engaged in union activities — even implying they might face physical violence — and promised promotions to other workers who provided information about the organizing,” CNBC reported at the time. That case was settled in October 2020.

The NLRB general counsel, serving for a four-year term, operates independently from the board and is in charge of investigating and prosecuting unfair labor practice cases.

Garcia told THE CITY she believes management targeted her after she appeared prominently in a February New York Times article speaking out against the company’s shift-scheduling practices, which she’d complained left her with fewer hours than she sought.

She said after the article came out, “a higher up in the company started showing up to my store.”

While Garcia is the only person named in the unfair labor practice complaint on Thursday, several other current and former Chipotle workers have publicly cited similar situations recently.

Richard Figueroa, who worked at a Washington Heights Chipotle, was fired after participating in a Lower East Side rally last October over working conditions and shift scheduling. At the rally, Figueroa claimed management repeatedly flouted the Fair Workweek Law — announcing schedules days in advance instead of the required two weeks.

Figueroa appeared in a union tweet, holding up a sign in the center of a group photo.

Figueroa, 27, also suggested management repeatedly scheduled him for days when he had said he was not available. He claims his manager told him he was dismissed the following day for being late to his Wednesday shift — even though he had already told management he was unable to work on Wednesdays, when he had to drop off his daughter at school.

Figueroa contends that while he was repeatedly late on Wednesdays, he was only fired after he spoke out publicly.

He now works as an advocate-organizer on the campaign to unionize Chipotle. He said in an interview with THE CITY that it’s important for workers to speak out about the issues.

“I know what it’s like to go to work every day and feel powerless,” he said. “To me, this is an opportunity to put some type of power back in crew members’ hands because as of right now, it just doesn’t seem like they have any.”

Another worker, Eric Ramirez, said his shift at a 50th Street Chipotle was reduced to just one day a week after a disagreement with management. Ramirez told THE CITY that he believes management started watching him and others more closely after he was caught talking to union organizers. He now works at another outpost in Times Square.