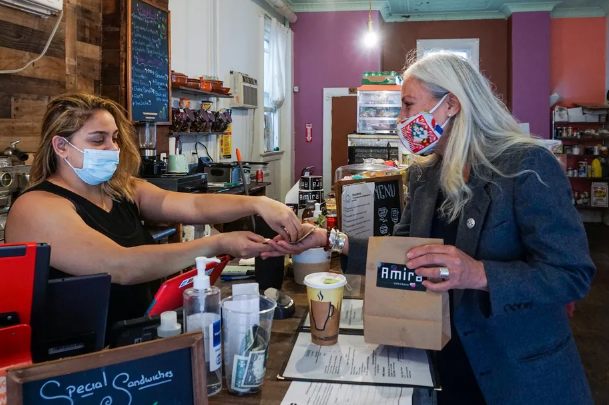 In theory, the system, in which voters rank up to five candidates in order of preference, takes away the motivation for negative campaigning so hopefuls can appeal to as many citizens as possible.

So when Lorie Honor’s Staten Island borough president campaign began circulating a non-aggression pact calling on her four fellow Democrats to pledge not to challenge each other’s petitions, she thought it was a “no brainer.”

But there were two unintended effects: First, a major candidate refused to go along. And then, all the campaigns’ petitions were challenged.

Meanwhile, signs of similar old-school animus are creeping into the mayoral race as the crucial June 22 primary draws closer.

And now, playing nice appears to be a thing of the past, with several top-tier candidates going after Yang for his comments to the business group Association for a Better New York in which he advocated for tax incentives for large companies.

“One of the major selling points of ranked choice voting was that it would minimize overt antagonism. And it hasn’t because it ran into a fundamental rule of electoral politics: that you got to take down your opponent,” he said. “The way you win in a crowded field isn’t necessarily by providing solutions to problems, but tearing down your enemy.”

‘Don’t Want to Hurt You’

Honor’s bid to get her four fellow Democrats on the same page as they run for the seat currently held by term-limited Republican James Oddo began benignly enough.

She asked her competitors to pledge not to challenge each other’s petitions –– an old-school political tactic in which campaigns file legal objections to signatures in a bid to bounce rivals from the ballot. Honor said she wanted to lessen the burden on candidates to collect excess signatures amid the pandemic.

Initially, she said, the reaction was positive.

“I love that every single one of the candidates that we coalesced with had very similar reasoning,” said Honor, a small-business owner and activist with Staten Island Women Who March.

Several of the Democratic campaigns that spoke with THE CITY said that they planned to run positive races to, in part, encourage and energize different parts of the party in the borough, where the dominant GOP recently took back Staten Island’s long congressional seat and several judgeships.

But there was one holdout: Mark Murphy, the Staten Island Democratic Party’s preferred candidate, who previously ran unsuccessfully for Congress in 2012.

In late March, Democratic candidate Cesar Vargas discovered copies of his petitions were being requested by Manny Ortega, which would allow the former law chairman for the borough’s Democratic Party to review signatures collected by the campaign.

Shortly after, two women with no apparent connection to local politics filed general objections with the Board of Elections against all of the Democratic candidates’ petitions.

The women were not reachable for comment. It wasn’t immediately clear whether they had met a deadline of 11:59 p.m. Monday to submit specific objections.

Murphy has the smallest chance of being knocked off since he’s filed over 4,000 signatures, the most of the field.

Candidates need to file 1,200 signatures to get on the ballot, though hopefuls usually submit many more due to challenges.

James Clinton, a spokesperson for the Richmond County Democrats, told THE CITY that the party didn’t file the petition challenges.

All of the campaigns in the Democratic primary denied being behind the challenges.

Some of the candidates who spoke to THE CITY said that the petition challenges were frustrating. They expressed concerns that Murphy would wage a negative campaign as the primary approaches.

“This is an opportunity for people to go out there and say why they’re qualified for the borough presidency instead of dividing,” said Vargas.

A Staten Island-based Democratic strategist who serves on the Democratic County Committee told THE CITY that the candidates should’ve anticipated petition challenges. The source added that to expect a crowded race to be devoid of negative campaigning is naive.

“It’s early, people aren’t feeling desperate yet. But I think what you’re seeing in the mayoral race is going to trickle down on all these races,” the source said. “Once people get into attack mode they’re going to fight tooth and nail. So I’d hold off judgment about how polite the campaigns are, because we still have quite a ways to go.”

One ranked choice voting expert said that because the system is so new in New York, candidates might not buy that staying positive or asking voters for a No. 2 nod is worthwhile.

“The reality is that this is our first time at it in a very important election with many, many candidates. So some of the candidates may think that by taking a negative tack that they can make headlines,” said Patrick McGinnis, who is on the steering committee for The Leadership Now Project, a pro-democracy group. “But at the end of the day it’s a missed opportunity.”

The winner of the Democratic primary will face an uphill battle in the general election. Several GOP candidates are vying for the nomination, including party-backed Councilmember Steven Matteo, ex-Rep. Vito Fossella and Leticia Remauro, a consultant who has worked closely with Rep. Nicole Malliotakis (R-Staten Island/Brooklyn).