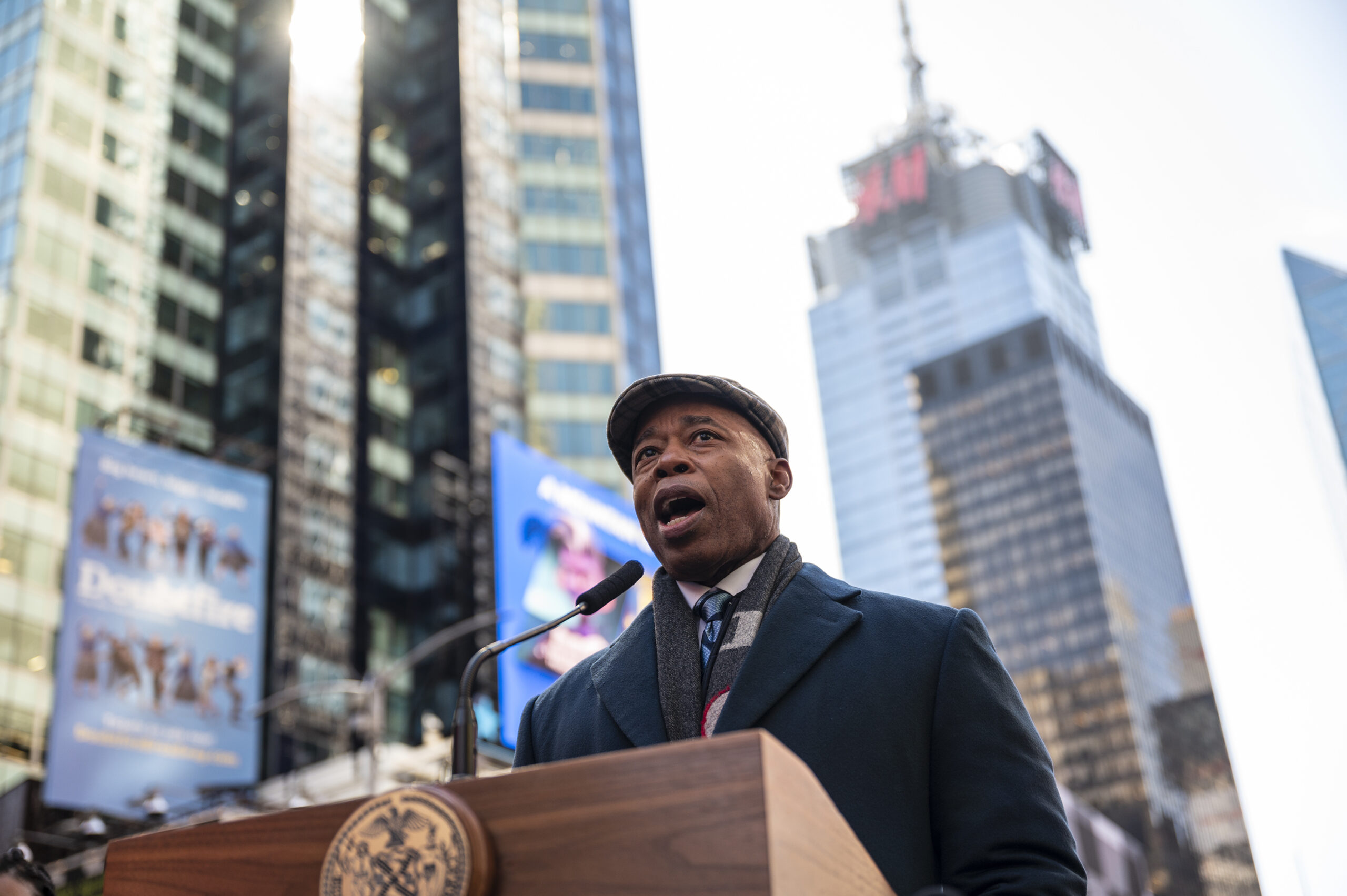 New York City’s pandemic-battered economy is in a better place than previously estimated, new numbers from the state Department of Labor indicate, with more jobs regained over the past two years — though still nearly 300,000 fewer than before COVID struck.

That’s a boost for Mayor Eric Adams, who on Thursday released a sprawling 70-point ”blueprint” to recover the city economy, which he said he wants to be “safe, clean, reliable, non-bureaucratic.”

“We will never be the same. COVID has changed the game and we must be prepared to win in the game post-COVID,” Adams said at a Thursday press event in the Bronx’s Hunts Point.

To that end, his administration seeks to revitalize the city’s economy through measures to advance public safety and attract tourism; to support businesses by offering streamlined services; and to grow the economy and advance job placement  in emerging industries such as cannabis, life sciences and clean energy.

“It covers a lot of bases, but there are a lot of bases to be covered. It’s a good start,” said Andrew Rein, president of the nonprofit watchdog Citizens Budget Commission. “He is a person who talks to business and communities and gets input, and we haven’t seen enough of that in recent years.”

The revised figures released by the state Thursday put unemployment in December at 7.4%, rather than the 8.8% originally reported.

For the administration to implement the full plan it will need to find $70 million in new funding on top of the $98 billion preliminary budget proposed by Adams, according to a mayoral spokesperson.

It would also require an additional $200 million for new capital commitments for such investments as building a “ground-up vertical manufacturing” center at the Brooklyn Navy Yard.

“We believe the investments and initiatives in this blueprint will accelerate the economy and help us more quickly return to the pre-pandemic employment rates of our city,” said Maria Torres-Springer, deputy mayor for economic and workforce development. “But if all we do is return to the economy that existed in February of 2020, we will not have truly delivered for all New Yorkers.”

It’s unclear where the money will come from and what will ultimately end up in the city budget, even as negotiations are underway. The preliminary budget Adams proposed has sparked concerns that the professed priorities don’t align with the finances.

“He says really great things but the question is, where is he putting his money?” said Maritza Silva-Farrell, executive director of the organization ALIGN, a union-funded group promoting green jobs.

She questioned how initiatives like expanded street cleaning and beautification projects would happen given that the mayor proposed cutting the Sanitation Department’s budget by nearly $48 million and slashing plans to expand composting.

Rein of the Citizens Budget Commission pointed out that what’s missing from the plan are specifics: costs for programs and targets for jobs, for example. The business portal is scheduled to be completed in 12 months.

“[It’s] important to set up a tracking system to make sure these plans are being executed,” he said.

Seeking to move ahead with plans to allow obsolete office buildings to be converted to residential use, the mayor said he and Gov. Kathy Hochul would establish a task force to come up with strategies on how the region can adapt to changes in work resulting from the pandemic. It isn’t clear if this group will supersede a task force to be established under legislation passed in December, which was given two years to assess changes needed for the city’s business districts.

That task force is one of 10 new groups the mayor proposed convening to examine commercial corridors, define new career pathways in the green economy, and advise on the film industry, among other pursuits.

Adams announced his plan the same day the state Department of Labor released revised numbers that showed job growth in the city last year was much stronger and the unemployment rate slightly lower than originally reported.

The new numbers showed the city added 60,000 more jobs last year than originally reported, with the biggest gains coming in the hard-hit areas of leisure and hospitality, especially restaurants, as well as trade and transportation.

With the addition of 32,000 positions in January, New York has regained 670,000 of the 971,000 jobs lost when the economy shut down in 2020. If the city could maintain that pace, it would recover all the jobs lost by the end of the year. Last month, both the mayor and the Independent Budget Office estimated getting back to the pre-pandemic employment record of 4.7 million would take until 2025.

“The December and January monthly gains indicate the pace of recovery is picking up,” said James Parrott, an economist at the New School who is closely tracking the city’s economy.

Still, the city has regained only 70% of the jobs it lost during the pandemic, compared with 90% for the country as a whole. The unemployment rate in January ticked up to 7.6% from 7.4%, almost twice the national rate of 4.0%.

As expected ever since Adams added the word “workforce” to the title of deputy mayor Torres-Springer, his plan outlines a major overhaul of the city’s job training system — described even by those who work in it as disjointed, with as many as 21 city agencies involved with little coordination.

Jose Ortiz Jr., then executive director of the New York City Employment and Training Coalition and now a senior advisor to Torres Springer, outlined to THE CITY the kind of approach needed — one that “integrates training and earnings.”

“Every aspect of the pandemic’s economic impact has hit lower-income New Yorkers harder, while exacerbating the divide between the city’s well-paying and low-wage jobs. That’s why it’s so important that the mayor’s blueprint puts forward a strategy for investing in economic and workforce development together,” said Eli Dvorkin, editorial and policy director at the Center for an Urban Future.

In January, advocates aligned with Ortiz called for increasing workforce spending to at least $100 million a year. The plan doesn’t spell out what money will be spent, and Dvorkin noted that the next step needs to be a substantial infusion of funds.

Still, the emphasis on leveraging in-the-pipeline investments for job creation in communities often left behind — like the $191 million commitment towards building the offshore wind industry — was encouraging to those who have for years been pushing just that.