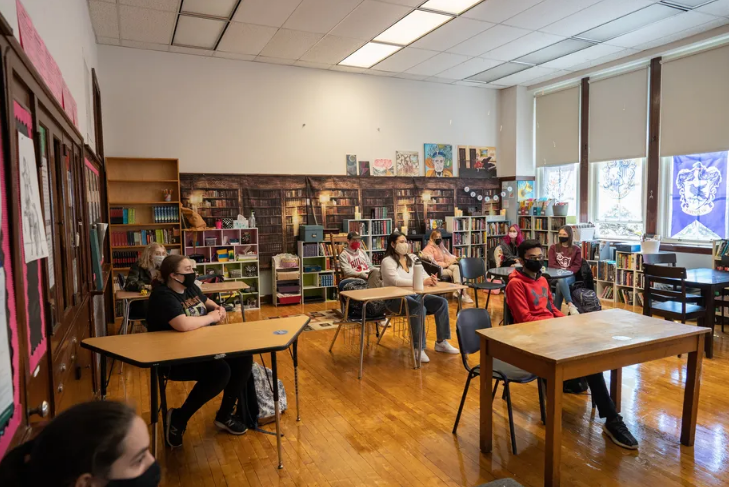 Slightly fewer Chicago students enrolled in four-year colleges and universities last fall despite the pandemic’s pressures — but two-year institutions saw a troubling dip in both new arrivals and in students returning for their second year on campus.

A new report from the University of Chicago’s Consortium on School Research shows that declines in community college enrollment and retention were steeper here than nationally and affected Black and Latino students more than their peers. The data also shows that Chicago Public Schools students’ enrollment in four-year institutions largely held steady and retention improved across racial groups even amid the pandemic’s upheaval. Some local institutions saw enrollment gains of 30% or more — increases the study attributes to decisive steps campuses took to support first-generation and low-income students amid the disruption.

“Colleges understood they were in the middle of an unprecedented crisis and students would need a lot more support during this time,” said Jenny Nagaoka, one of the researchers who worked on the report.

Overall, 40% of Chicago Public Schools’ graduates enrolled in four-year universities last fall, and almost 85% of students previously enrolled returned to those campuses, an improvement over the previous year. About 16% went to community colleges, and the portion of those who returned for their second year — a metric that has steadily declined since 2017 — dipped by about 2 percentage points, to 62% last fall.

Nagaoka cautioned that the pandemic and a year largely spent learning from home have continued to put pressure on college applicants, and this coming fall could bring further enrollment losses. Chicago saw a 10% drop in college applications last fall, district officials reported earlier this year, raising concerns that this year could erase recent gains in steering students to post-secondary education.

For Chicago Public Schools students, enrollment in four-year colleges dipped only slightly, by 2% last fall, compared to 4% for those institutions nationally. Students already enrolled in four-year institutions returned to campus to continue their studies at comparable rates to previous years, a finding that held across races.

Four Illinois institutions — Western Illinois, Columbia College Chicago, DePaul University and Northern Illinois — saw enrollment gains of 30% or more, even as other schools experienced marked dips. It does not appear that an institution’s reopening model — online, in-person or a combination of both — was the deciding factor. The Consortium is hosting a panel discussion with officials from Western Illinois and Northern Illinois universities about practices and policies that allowed them to boost enrollment last year.

The study said what appears to have helped the most were policies responding to the pandemic’s disruption to learning and household finances. Many institutions made standardized college entrance tests optional, both for admitting students and for considering them for merit-based financial aid. Some removed financial holds on enrolling in 2020 classes for students who owed tuition or other payments — changes that Nagaoka says some institutions had considered previously but only implemented under pressure from the coronavirus outbreak.

Some scholars had assumed that community colleges might hold the ground on enrollment and retention better amid the pandemic because they are more affordable. But the picture was bleaker for those two-year institutions, both in Chicago, where enrollment dropped by 18%, and to a lesser extent nationally, where community colleges saw a 13% enrollment decline.

Nagaoka said four-year institutions might have fared better because they tend to accept and forge connections with students earlier, with more planning and support involved in the run-up to students’ arrival on campus. The pandemic also hit communities of color harder, and students from those communities continue to make up a larger portion of community colleges’ enrollments. Those students might have had more family responsibilities, from work to child care duties, and faced steeper financial hurdles.

In a national survey by New America, two-year college students listed “could no longer afford program” or “had to work” as the top reasons for failing to enroll or to return to these campuses. The City Colleges of Chicago saw its enrollment of Chicago Public Schools’ graduates drop by 22% and the rate at which they returned to campus dip by 2%.

Nagaoka said educators and researchers will watch closely how college enrollment and retention play out this fall. Students learning virtually did not have the ready access to guidance counselors and other support with applying to college; many did not get a chance to visit campuses this spring.

“The findings from 2020 were encouraging, but this year poses a whole different set of challenges,” she said.