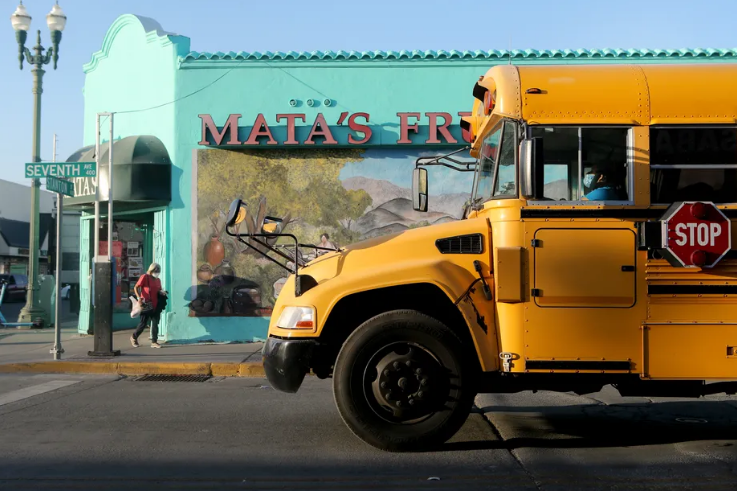 It’s been one of the most politically fraught and scientifically complex questions of the pandemic: do open school buildings contribute to the spread of COVID?

A new study says yes, at least in Texas, where researchers say school reopening in fall 2020 triggered a sharp increase in COVID cases and ultimately deaths. Some other studies have also found evidence linking in-person schooling to COVID cases — particularly when existing community spread is high or when mitigation is weak — but the Texas paper is notable for the large effects it found.

That doesn’t mean that spread of the virus was rampant within Texas schools. The researchers say the reopenings may have indirectly triggered the surge, since the opening of  schools may have allowed more parents to return to work and signaled to a community that they could return to more normalcy.

“Overall, we find convincing evidence that opening schools led to community spread,” wrote the four researchers, all from the University of Kentucky.

The finding offers a significant — although contested — data point for understanding whether states and districts appropriately weighed risks related to COVID and schools, a debate that consumed the country for months.

Regardless, experts emphasized that the results have less relevance moving forward because vaccines are now prevalent and thus COVID risks are lower.

The paper, which has not been formally peer reviewed, examines school reopening in Texas starting in fall 2020. Researchers effectively compared districts to each other based on when they reopened, controlling for other factors, including politics and existing COVID spread.

The results, researchers said, were striking. Over several weeks, school opening triggered a large jump in COVID cases and deaths, researchers said. Their best estimate is that a remarkable 45% of cases and nearly two thirds of deaths in Texas in nine weeks following reopening were the result of the direct and indirect effects of school reopening.

“The magnitudes are huge,” said Dan Goldhaber, a University of Washington professor who has studied COVID and schools in Michigan and Washington.

But the study warns not to take these numbers as gospel since there is still a large range of possible effects. More conservatively, they say, school opening led to at least 43,000 extra COVID-19 cases (out of 373,000) and 800 additional deaths (out of 4,800) during that time period — still a substantial increase.

A spokesperson for the Texas Department of State Health Services said the office typically doesn’t comment on external research but noted “we haven’t seen large outbreaks associated with on-campus learning.”

The study says it’s not just about what is happening in schools, though. Part of the argument for reopening was to ease the burden of childcare and help more families return to work. Indeed,adults were more likely to spend significant amounts of time outside their homes after schools opened, particularly during weekdays when schools are in session, according to the Texas research.

“When the kids are back in school, a whole lot of things change, not just the kids being back in school, the most obvious being that parents can now go back to the work site,” said Chuck Courtemanche, one of the study’s authors.

This, they argue, may have been missed by other research that focuses on contact tracing cases within school, but doesn’t examine the broader effects of reopening on a community.

Although the study can’t measure in-school spread, case rates among Texas school staff during this time period were notably higher than in the surrounding community. That suggests that spread within schools may have played some role. So too might school activities like sports, which have been connected to COVID spread elsewhere.

What the study doesn’t consider — which the authors readily acknowledge — are the negative effects of closed schools, already seen in learning loss, failing grades, and social isolation. A spokesperson for the Texas Education Agency emphasized this point in response to the study: “What research has consistently shown throughout the pandemic is the extensive learning loss and detrimental mental health impacts of school closures. Texas schools have mitigated the worst of these issues for many students by remaining open for all students who chose to attend this school year.”

The study also looks at a period when vaccines weren’t available. Now that they are, the risks of school reopening are almost certainly lower. “Vaccine changes everything,” said Susan Hassig, a Tulane University epidemiologist. “The kids are still in school and fatalities are on a downward trend,” she added, referring to Texas.

Still, the data might provide additional urgency to get more people vaccinated, as more schools are open now and many officials hope for full reopening next school year.

“If you believe these results, the big policy implication I would take away is we’ve got to hurry up and get all of the adults vaccinated before the school year starts,” said Vladimir Kogan, an education researcher at Ohio State University .

External researchers offered mixed reviews on how convincing they found the results.

“As a whole it struck me as a pretty careful analysis on an area that’s really hard to analyze,” said Goldhaber.

But researchers of all stripes warned that disentangling the effects of schools on community spread is extremely difficult.

“The overall picture shows a change in a lot of other things at the same time — work hours, for example — and although that could be a result of school opens, it may also be that other restrictions changed,” Emily Oster, a Brown University researcher who has argued for more schools to reopen, wrote in an email.

Kogan, who has also argued in favor of school reopening, said some of the Texas data gave him pause, particularly an indication that COVID case rates started to tick up before schools reopened. He also said the effect was just too big to believe.

“Does it pass the smell test — that school reopenings were responsible for two thirds of the fatalities? My intuition is that that seems implausibly high,” he said, pointing out that during the time period of the study, Texas had similar COVID rates as the country as a whole despite taking a particularly aggressive approach to opening schools.

Other research has shown that schools can contribute to COVID spread, but the effects have generally been more modest. One recent study found that households with children saw increases in COVID cases because of school reopening — but only by about 3%. Another, focusing on Indiana, found that a 10 percentage point increase in students attending school led to a roughly 1% uptick in community cases.

Other work has found that schools don’t seem to spread COVID cases at all when community spread is low, but might make things worse when the virus is already prevalent.

“On the surface, our empirical findings diverge with several popular narratives that have emerged about school openings,” wrote the Texas researchers. “It is important to emphasize that the initial conditions in Texas were more ripe for community spread and schools opened more widely, more quickly, and generally, close to full capacity.”