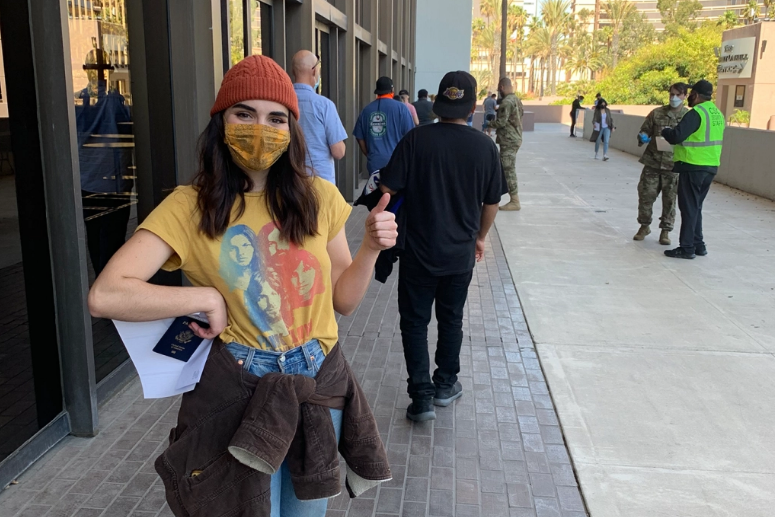 As a server at the Navy Proof Restaurant and Bar, the specter of covid has weighed heavily on her mind for the past several months. Davila has been especially worried about the possibility of bringing the virus home to her young son and diabetic mother.

And here she was, standing outside the Long Beach Convention Center with hundreds of other Long Beach residents and workers, about to receive a coveted covid vaccine — even though she’s only 31.

The occasion: a super-sized vaccine clinic just for food workers. The March 5 date offered 3,000 slots to restaurant workers, bodega and market employees, cooks or anyone else in the city’s food business.

The vaccine day, which the city has followed by dedicating more shots to food and other essential workers, was an attempt to help safely reopen Long Beach restaurants while providing a giant thank-you to people who’ve been risking illness to keep the city fed, said Long Beach Mayor Robert Garcia.

At a time when millions of Californians were trolling websites for hours to find vaccination slots, Long Beach, which has its own health department separate from the rest of Los Angeles County, aimed to simplify the process, at least for a few vulnerable groups.

“Food workers have been working nonstop since the start of this pandemic and they deserve to feel safe when they go to work to serve their community,” said Garcia, whose mother and stepfather died of covid in July.

Jennifer Rice Epstein, a spokesperson for the city health department, encouraged Long Beach residents and workers to register at longbeach.gov/vaxLB for one of 3,000 vaccine appointments the city is offering daily to employees in these sectors: food service, health care, agriculture, emergency response, education, janitorial services — and anyone 65 or older.

In addition to the 3,000 appointments, the city holds an additional 500 spots open each day for city residents and workers without appointments — as long as they show a pay stub or other proof they are in a priority tier.

Long Beach’s century-old health department has established relationships with schools, nonprofit partners and businesses that have built up a level of trust that makes it easier to organize such campaigns, Rice Epstein said.

The city of 466,000 was also one of the first in the state to send mobile clinics to vaccinate residents with physical and mental disabilities, she said. The city also offered to send a vaccinating team out to any qualified person who can’t physically reach the convention center. As of March 15, the roughly 20% of city residents who’d gotten at least one shot was similar to the overall rate in the state.

“I feel lucky,” said Eric Bohay, 28, who has asthma and works at the grocery pickup counter at a Target store. “I’m in close contact with customers on a daily basis. I take as many precautions as I can, but you never really know what’s out there.”

Food service workers have been plagued by covid during the pandemic. One study conducted at the University of California-San Francisco found that deaths of food workers in restaurants, food production and agriculture jumped 39% from March to October 2020. Adults with covid were twice as likely to have dined out in a restaurant in the two weeks before they showed signs of illness, according to a CDC study, suggesting that the virus lingers in the air where servers, cooks and bussers spend many hours a day.

Those in line expressed some nervousness about the vaccine. “People are saying different things about how they feel after” getting the shot, said Sydney Tripoli.

The 21-year-old photographed rock bands in Orange County and Los Angeles before the pandemic shut down live events. Then she took a job at Ahimsa Vegan Cafe on Fourth Street in Long Beach. She was hoping a vaccination would bring her a step closer to returning to photo gigs.

City officials had phoned and emailed managers and owners of food enterprises — from grocery stores to bars and restaurants — encouraging them to invite their employees to sign up.

That’s how Andrew Anderson found out. Anderson, 37, owns the Spicy Kitchen, which makes hot sauces, rubs and pickles for restaurants and markets.

“I was super excited because I do work with a lot of grocery stores and vendors, so I am exposed to a lot of people,” he said. He ended up chatting with an industry friend who was also in the vaccination line.

“I feel like I won the lottery,” said his friend Lance Todd, a 52-year-old bartender at The Brit, an LGBTQ bar in Long Beach. “My husband can’t get a shot yet, so at least this is better than neither one of us having it.”