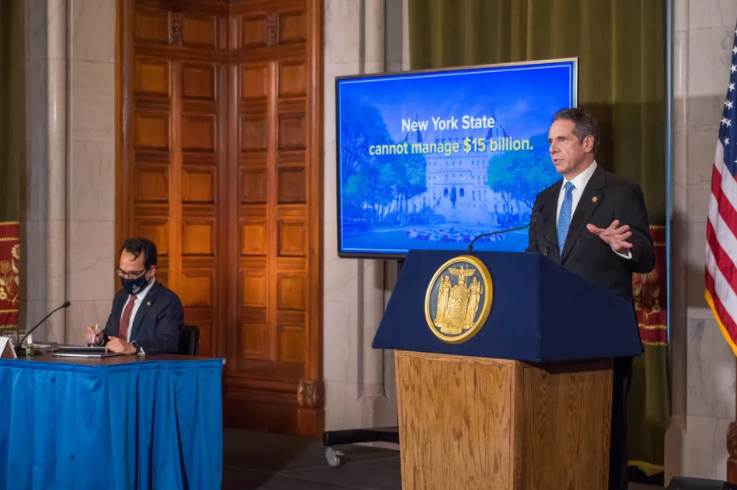 With the state budget due to be passed in a week, Albany finds itself divided into two camps with very different views of New York’s future — perhaps no more so than on whether to further tax the rich.

On the one side are business groups, joined this week by the scandal-impaired Gov. Andrew Cuomo, who say that with tax revenues far higher than expected and about $30 billion funneled into the state’s coffers by federal aid packages, there is no need to raise taxes on people making $2 million or more annually.

“If the state adopted the governor’s budget without its proposed personal income tax increases, it would run a $5.9 billion surplus over the next two years  and that is even without the billions in federal elementary and secondary education aid,” said Andrew Rein, president of the Citizens Budget Commission.

If New York does seek higher revenues, tax foes argue, it could spark an exodus of wealthy taxpayers who already pay the biggest share of the income tax.

On the other side are progressive groups and state legislators who say New York needs to increase spending because of the damage done to individuals and business by the pandemic — and that the high-income New Yorkers who prospered during the crisis should pay their fair share of the cost.

Queens Sen. Michael Gianaris, the deputy majority leader in the state Senate and a leading proponent of tax increases, conceded that federal aid has closed most of the state’s budget gap.

“But when we talk about rent relief, that is additional spending,” he added earlier this month on the public television news program New York Now. “Grants to small businesses to keep them thriving is additional help that is needed in addition to all the other needs we have. These are programs that need additional revenue.”

While few New Yorkers are likely to feel much sympathy for a couple pulling in $2 million or more annually after a year in which the city lost 630,000 jobs and many face eviction and food insecurity, tax opponents argue that a loss of high-earners could blow holes into the social safety net.

Their key statistic: The top 5% of taxpayers in the state account for 60% of all income tax revenues. Plus, they contend, the pandemic-forced acceleration of remote working has made it less crucial to maintain a physical foothold in the city.

Tax supporters say that talk of corporations and jobs leaving the city are overblown bluffs intended to keep taxes down — and believe the lure of Wall Street and hopes for a New York cultural rebound will keep most big money-makers staying put.

Meanwhile, with Cuomo facing investigations and an Assembly impeachment inquiry and the increasingly progressive Legislature holding a Democratic super-majority, where the tax trail leads is anybody’s guess.

The conflict is propelling another loop on the budget roller coaster that’s gripped the state since the pandemic hit last March.

Cuomo first estimated the state would lose $60 billion in revenue over four years. But with most higher-income workers keeping their jobs and Wall Street booming, tax collections exceeded estimates by $33 billion, according to the Citizens Budget Commission.

Federal aid will be at least $25 billion, not including $12 billion in education assistance.

As the debate heads toward a crescendo, an analysis done for THE CITY by the Volcker Alliance State Budget Team, a research group that tracks fiscal policy issues across the country, shows New York already spends more than any other state than  Alaska.

State and local spending per capita in New York totaled $18,789 in 2018, according to the analysis. Alaska spent more but is an outlier because it uses oil revenues to make direct payments of about $1,600 per person to every resident.

New York’s spending is 22% higher than California, and double Florida and Texas — both income tax-free states and major destinations for former New Yorkers.

Democrats in the Legislature have proposed increasing the current top rate for couples making more than $2 million from 8.82% to 9.85%, with further hikes for those with higher incomes and a top rate of 11.85% for those pulling in over $25 million.

New York City residents making more than $50,000 pay an additional 3.876% in city income tax. The combined city and state rate for those making $2 million of 13.7% would supplant the 13% top rate in California for the top spot in the country.

The state would also impose a 1% additional tax on capital gains by high earners. With other tax increases, the total is around $7 billion.

In addition, President Joe Biden is expected to propose increasing federal income taxes on people making more than $400,000 by boosting the top rate to 39.6% from 36% and raising capital gains taxes.

The impact could be substantial.

A hypothetical example, prepared by the accounting firm Anchin Block & Anchin for THE CITY, of a New York City couple making $2 million a year shows that if the Democratic proposals are approved in New York and Washington, the couple’s total income tax bill would be 40% higher in New York than Florida. The couple would pay $873,000 in income taxes in New York compared with $589,000 in Florida.

“Taxes absolutely matter,” said Alan Goldenberg, a state and local tax principal at Anchin, who helps wealthy people prepare their returns. “At the end of the day, taxes are one of the biggest expenses people have to deal with. If they can replicate their life [somewhere else], there are many many people who want to take advantage of lower tax rates.”

Earlier this month, Crain’s New York Business reported that JetBlue is considering relocating from Long Island City, represented by Gianaris, to Florida, in part or completely. A potential exodus of both individuals and companies is fueling the rallying cry of the opponents of tax increases.

“During the pandemic, financial talent has been largely operating from remote locations and many have realized that they do not have to be resident in New York anymore,” said Kathryn Wylde, CEO of the Partnership for New York City. “Imposing a half dozen new taxes on this group of current expatriates is bound to deplete the state tax base, not raise revenues as promised.”

She spearheaded a letter from 250 business leaders this week saying higher taxes threatened the recovery.

Proponents of the tax increase dismiss the idea of any significant flight out of town.

“Companies are always moving,” Gianaris said on New York Now. “This [fear of an exodus] is the same old thing we hear anytime we ask the rich to do more. The fact is we have had a tremendous amount of suffering and the fair thing is to ask those that have done so well to help us on the recovery.”

Gianaris declined a request from THE CITY for an interview.

Invest in Our New York, the group pushing for the full $7 billion in new taxes, also argues it’s time to redress pro-rich policies of the Cuomo administration. This week, the group released a study showing the wealth of the state’s 120 billionaires jumped by $156.3 billion, or 30%, between mid-March of last year and this year.

“While COVID-19 exacerbated New York’s economic crisis, the pandemic did not create these conditions,” said  Rebecca Bailin, manager of the Invest in Our New York effort. “Over the last decade, Gov. Cuomo has used the budget to protect and enrich wealthy New Yorkers — cutting taxes for millionaires, banks, real estate corporations, and even yacht and private jet owners.”

James Parrott, a progressive economist at The New School, said that the pain wrought by the coronavirus crisis has been made worse by a pre-pandemic lack of state spending on everything from higher education to child care to nonprofits that provide social services.

“There’s no question that New York has been underinvesting in recent years in several key areas,” he said.