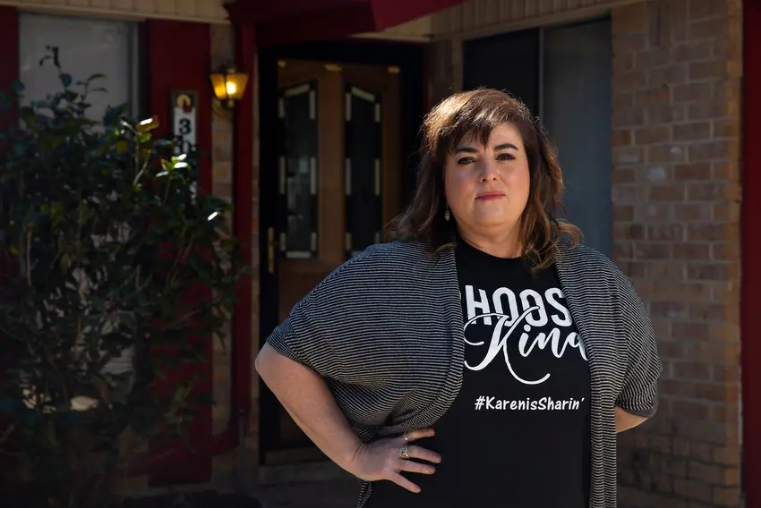 But how they’ll accomplish that remains unclear. The state’s deregulated electricity market not only allows for staggering price spikes, but effectively compels them for some customers.

While many Texans are on “fixed rate” electricity plans that insulate them from market swings, others pay rates tied to the spot price of wholesale electricity, which skyrocketed during the storm.

The rate hike was supposed to entice power generators to get more juice into the grid, but the astounding costs were also passed directly on to some customers, who were suddenly being billed more for electricity each day than they normally pay in a month.

Karen Knox, a special education teacher in Bedford, was among them. She lost power during the crisis but still owes some $7,000 to Griddy, an electricity provider located in Houston.

As the cold snap hit early last week, she was horrified to notice $400 had been withdrawn from her bank account — well above the price her family of three normally pays for electricity for their four-bedroom home. She removed her debit card information from Griddy’s system, and told her bank the charges were fraudulent. She’s not going to pay.

“There’s no way I can and I’m not going to,” Knox said. During sweltering summer months, the maximum the family has paid for electricity is $150, she said.

Griddy, the company Knox used, is one example of how the state’s deregulated system can funnel the cost of a power emergency down to its 29,000 customers.

The company buys electricity at wholesale prices, and passes the real-time rates along to its customers, who pay a $10 monthly fee for the service.

“Griddy customers might [normally] be paying three cents per kilo-watt hour because that’s the average price of the market,” said Joshua Rhodes, research associate at the Webber Energy Group at the University of Texas at Austin. “But if they’re exposed to these prices and it goes to $9 [per kilo-watt hour], that’s $290 a day — they’re using the same amount of electricity.”

An average home uses a little more than 1,000 kilo-watt hours a month, he said.

Griddy did not respond to a request for comment Monday, but has allied itself with its customers in online posts. Before the storm, the company had urged its customers to switch to other providers, fearing high prices.

“We intend to fight this for, and alongside, our customers for equity and accountability – to reveal why such price increases were allowed to happen as millions of Texans went without power,” one post said.

It’s not clear how many Texans are on variable rate plans like Griddy’s. But the arrangement produced eye-popping costs for some during the storm — topping $17,000 for a man Dallas television station WFAA spoke to — which triggered outrage from Texans just beginning to pick up the pieces after a bruising week endured, at times, without electricity, heat or water. Over the weekend, Abbott vowed that scaling back the bills will be a top priority, and the state’s utility commission temporarily stopped electric companies from turning out the lights on customers who don’t pay.

Even the majority of Texans not on variable rate plans can expect to see their electric bills go up, simply because they needed more power to keep their homes warm, or reheat them after losing power. They could also face ripple effects later — “next time you go to choose a retail electric provider, prices might be a bit higher,” Rhodes said.

Kaiba White, an energy policy specialist with consumer advocacy group Public Citizen, said the costs would be passed on to customers one way or another.

“If they [the electric provider] don’t have a mechanism that allows them to do that in the immediate — like on the next bill or the next several bills — it’ll end up getting rolled into the overall cost of service,” she said. “It’s just a matter of whether it’s going to get passed on in an immediate way, in a shocking way … or spread out over time.”

Tim Morstad, associate state director with the Texas AARP, said “prices are going to rise” but with a delay for those not on variable rate plans.

“Forgive me for stepping back to say — this system is truly designed to have high prices and huge fluctuations. And putting consumers through that by design is a bad process. It’s setting people up for pain,” he said.

Texas has an unusually deregulated electricity market that’s touted for offering customers the ability to pick from hundreds of plans offered by dozens of electric providers. Parts of the state are carved out, including cities like Austin, that get energy from a municipally owned utility, or people served by cooperatives. Those too could see cost increases down the line.

Lawmakers and Abbott have pledged to protect consumers from the big bills, and excoriated the Electric Reliability Council of Texas for the outages last week. The reliability council, which operates the power grid that covers most of the state, is overseen by a Public Utility Commission.

Abbott’s office did not respond to a question about what options were on the table.

Lawmakers have demanded that the utility commission roll back its decision to allow the huge rate increases, or suggested cobbling together some package of emergency waivers or relief money to buffer Texans’ from the high bills.

“We cannot allow someone to exploit a market when they were the ones responsible for the dire consequences in the first place,” said state Rep. Brooks Landgraf, R-Odessa.

Experts said people who signed up with providers like Griddy might not have understood the risks associated with the plan, or may have been drawn to the game-like quality of using an app to track swings in electricity prices and change their behavior — similar to playing the stock market.

Other Texans said they just never expected the prices to get so high.

Aubrey Jakob, a Starbucks barista and former Griddy customer living in Houston, prepped for the outage by stocking up on water and getting out extra blankets and flashlights. She expected her electricity prices would go up but was “mortified” when she saw them skyrocket. On Monday, it cost her and her husband — who live with a third roommate — more than $560. The next day, their power went out. Reheating the apartment and taking a shower left them with a $449 bill.

“This is my entire paycheck,” said Jakob, who said she makes about $1,200 a month. “My husband and I are — we’re pretty frugal. So we have a decent amount of savings, but this is enormous.”

She knew spiking prices were a “risk” of using a variable rate service like Griddy, but normally she and her husband benefit from the model because they closely track their electricity usage, she said. The couple tried to transfer to TXU Energy as soon as possible, but the earliest date they could was this week, after the storm had blown over. While she was grateful to have power, she said “at this point, it almost feels like it would be better to not have any power at all because at least we wouldn’t be paying that much.”

“I feel torn because I realize that we have to accept responsibility for doing a service like this that is wholesale,” she said. “It still is really hard to cope with the fact that we have an infrastructure and a system overall that allows for something like that to happen. It feels like it’s evil.”

The couple is “fortunate” they could pay the cost if they need to. But it would decimate all the savings they’d hoped to put toward a down payment on a home or to replacing a car. Jakob described sobbing in bed thinking, ‘How is this our life? How did this happen?’ They thought they were doing everything right. They don’t have debt, she said.

Some Texans said they signed up for a fixed rate plan but were unknowingly bumped over to a variable plan when their contract was up.

That’s why Lisa Chumley, a teacher in Dallas, said she and her husband ultimately signed up for Griddy. They were stuck with a $1,500 bill for electricity one summer, and said TXU Energy had moved them from a fixed rate plan to a variable plan without their knowledge.

The low rates appealed to her. With Griddy, she’s paid about $80 a month for electricity for her three-bedroom home.

As the storm set in last week, the family didn’t lose power. But Chumley was shocked to see hundreds of dollars had been withdrawn from her bank account by Griddy. Her husband checked with the electric provider and saw they owed $1,000. The balance kept ballooning. It now tops $10,000.

“I’m a teacher and I don’t have that kind of money,” Chumley said. “I get paid once a month — and that’s more than I see in three months. … Normal people can’t afford to pay that.”

Lisa Chumley, a second-grade teacher in Dallas, received a bill of over $11,000 from Griddy for less of a week of electricity. Griddy charged $9 per kilowatt through the days of the winter storm, leaving many Texans with extremely high charges.

Lisa Chumley, a second-grade teacher in Dallas, received a bill of over $11,000 from Griddy for less of a week of electricity. Griddy charged $9 per kilowatt through the days of the winter storm, leaving many Texans with extremely high charges.

She and her husband tried to find a new electric provider, but said none could take them on until Feb. 22, after temperatures had returned to normal. She doesn’t blame Griddy — “I think it’s the state,” she said.

Carol Rouse said she and her husband, who are both truck drivers, could pay their “astronomical bill,” but she was concerned about those who can’t afford it. Rouse, 61, said her sister who lives in Frisco had called her practically in tears about her high bill.

Rouse and her husband have a two-bedroom apartment in Carrollton and last month paid $93.11 to TXU Energy for electricity. They didn’t lose power during the storm and reduced their energy usage, according to a bill estimate. Still, their costs are projected to reach $406 for the month — higher than they’ve ever paid, Rouse said. They have a fixed-rate plan, she said.

TXU Energy expects even its variable-rate customers will be “insulated” from rate increases because of the storm. It also said customers may be confused by estimates of their electricity usage which may be based on inaccurate information. Most will see corrected figures in the coming days.

Beyond customers, the spike in wholesale electricity prices could spell trouble for smaller providers who bought the electricity at a sky-high cost but gave it to customers at their usual lower rate. Analysts and experts expect many will fold — bouncing their stranded customers to so-called “providers of last resort” in a process that’s “confusing for customers and costly,” Morstad, with the AARP, said.

“They don’t choose their provider of last resort, they’re just sent there. It’s never a great competitive rate,” though they can change companies after, he said.

Some Texans faced with the shocking bills say they are grateful that Abbott and the utility commission have recognized their plight.

Knox, the special education teacher in Bedford, was able to move to a new electric provider last week but still has the bill from Griddy looming over her head.

“People are already suffering with the whole COVID — not getting to work as much. … It just couldn’t happen at a worse time. I think something has to happen. Big. And I don’t know what that is but definitely a change,” she said. “We can’t, we can’t keep going the way we’re doing.”